Adventure on the lake Wakitipu

“Brown! Brown in town!” Simon, our fishing guide, yells as we net the second brown trout within five minutes of the first cast. Everyone looks at one another, semi stunned, is it really this easy?

A week earlier I had decided to book a trip with Queenstown Fishing. A private charter, for myself, three mates and my Dad who was visiting from the UK.

I’d been river fishing the year before and really enjoyed it but considering my mates were complete novices I thought it best we go out on the lake. I didn’t want to spend the whole time untangling lines from the tree line after a rogue cast.

As we stepped on board, however, I was a little worried I wouldn’t get the same value for money. I couldn’t have been more wrong.

We leave at 9am, the Remarkables mountain range jaggedly reflecting off the perfectly still water of Frankton Marina. Simon’s boat, Nikita, can comfortably accommodate groups of up to twelve but with a 230 horse power Volvo engine she’s no slouch.

It only took us around 30 minutes to reach our first fishing spot at the far end of the lake. After a brief demonstration from Simon we start casting. My first is a beauty, 30 feet right at the mouth of the river. Eagerly reeling in, I turn and snigger at my mate, who’s first cast is a complete shank.

He starts to angrily wind back in and then BANG!
No need to even strike the fish has hit the spinner that hard. A stunning six pound brown trout, the jammy sod. High-fives all round. What a start.

Simon points at the fish tracker, there’s a school of fish right below us. We change tack. Rather than trying to cast as far as we can we simply drop the lure to where we know the fish are. A tactic that works well. Over the next hour every single person catches at least one fish; two trout and four Salmon.

Queenstown Fishing does promote catch and release but we decide to keep a couple for the barbie. They were great eating, especially the trout, a rare treat that you can’t buy in the shops.

After this fruitful start Simon decides to take us to Pigeon Island so called because of the native wood pigeon that’s found there. At 170 hectares it is the lake’s largest island and is absolutely stunning. Home to a large number of native trees, it feels like we’ve stepped onto something out of Jurassic Park.

We’re all in shorts and t-shirts, yet there is still snow on the surrounding peaks. The highest, Mt Apsiring, stands over 3000 meters above us.

Whilst doing a bit of shore fishing from the beach Simon prepares some sashimi from the very salmon we had just caught.

It doesn’t get any fresher or tastier that that. There’s also a BBQ on board but we decide to save the fish for our family and friends. But will definitely do that next time.

We set off again for a bit of trawling at Bob’s Cove, passing some breathtaking scenery on the way, including a couple of waterfalls. Simon sets up four rods hoping for trout. Smarter than salmon, trout need the movement in the lure to be fooled so we cruise slowly round the cove.

Simon explains that we’re looking for a small arc on the tracker and each time we see one we know we’re coming up on a trout. We do get a few nibbles but no bites. Although, the anticipation of each arc is almost as enthralling as actually reeling the fish in.

Heading back for the marina I can’t believe how five hours have past.I have experienced many exciting things in Queenstown including other fishing trips but I can say with some confidence that this was by far and away the best… So far! 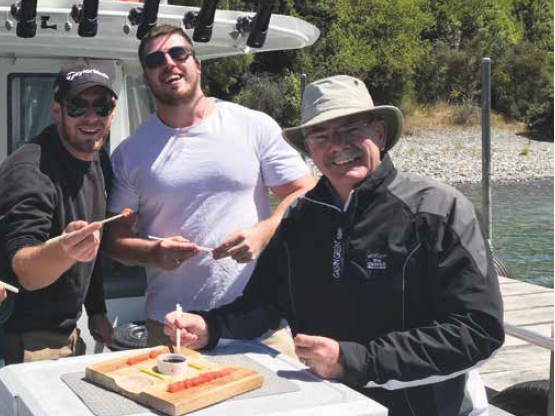 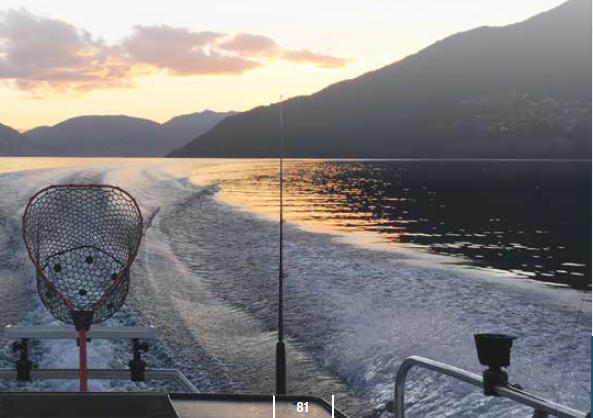 Hear the word ‘snowshoes’ and often what springs to mind is the image of someone with tennis rackets tied to their feet.

Thankfully, things have come a long way since then, and our modern slim-line snowshoes are now both super comfortable and incredibly easy to use, allowing hassle-free access to the most impressive parts of the mountain. If you can walk, you can snowshoe – it’s that easy.

Snowshoeing is a non-technical alternative to skiing or snowboarding. Leave the skiers to their lift queues and join our specialist alpine guides in exploring the best parts of the mountain, accessing the most magnificent vistas that are usually available to only the most proficient skiers.

Snowshoes can be mastered in minutes, which means you spend more time taking in the stunning views and less time getting to grips with unwieldy ski equipment.

Our guided Snowshoe hikes are hassle-free alpine adventures with all gear and return transport from Queenstown included. We have a range of trips to suit all abilities and the expertise to ensure that your experience with us is safe as well as exciting.

Snowplay is ideal for families and those new to snowshoes, with less focus on walking and more emphasis on having fun in the snow.

Our popular Snowshoe Adventure involves a little more hiking, including a gradual climb of 200m to make the most of the alpine scenery. For a truly exhilarating experience, nothing beats our Heli Snowshoe trip.

Just minutes from Queenstown, yet incredibly remote, your guide will lead you through the breath-taking landscape of an untouched winter wilderness.
Escape the crowds this winter and join us for a hassle-free and unforgettable alpine adventure.