Eastwoodhill in all it’s glory

As autumn rears its pretty head, many trees growing in New Zealand lose their leaves, whilst our NZ natives retain their evergreen leaves throughout.

But In Gisborne on the East Coast of New Zealand there is a special slice of paradise tucked away in the Ngatapa Hills where one man’s dream means thousands of species of trees and shrubs develop leaves of all colours for the autumn season.

With the largest collection of Northern Hemisphere trees in the Southern Hemisphere, including over 25,000 species of exotic and native trees, shrubs and climbers, the Eastwoodhill Arboretum is unlike any other park you may visit in this part of the world.

A fledgling farmer by the name of Douglas Cook first envisioned these 620 acres of land, which he drew in the New Zealand land ballot of 1910, as a garden and shrubbery.

After convalescing in Britain from wounds he received in World War I, where he visited the grand homes and gardens of relatives and their friends, his dream got bigger. Cook returned to New Zealand and commenced planting in 1918.

Cook was perceived by locals as eccentric due to the lack of clothes he wore and was often found planting in nothing but one gumboot so that he was still able to drive in the spade.

In the early 1920s, with his vision of a “garden for all New Zealanders” and here we are over 100 years later, able to enjoy the fruits of his labour.

The incredible autumn hues of many Oaks, Maples and Ash trees are a bright contrast to the surrounding farmland, and not what we are used to seeing in New Zealand.

Each season boasts its own display of colour and bloom, with autumn and spring being particularly picturesque.

The Scarlet Oaks form the backbone of the beautiful autumn colour at Eastwoodhill every year, these were one of Cook’s favourites.

The immense collection of trees at Eastwoodhill has been internationally recognised and was awarded the inaugural ‘Arboretum Distinguished for Merit’ by The International Dendrology Society in 1978.

The Homestead Garden was awarded and recognised as a five star ‘Garden of National Significance’ by the NZ Gardens Trust in 2004 which is still retained today. 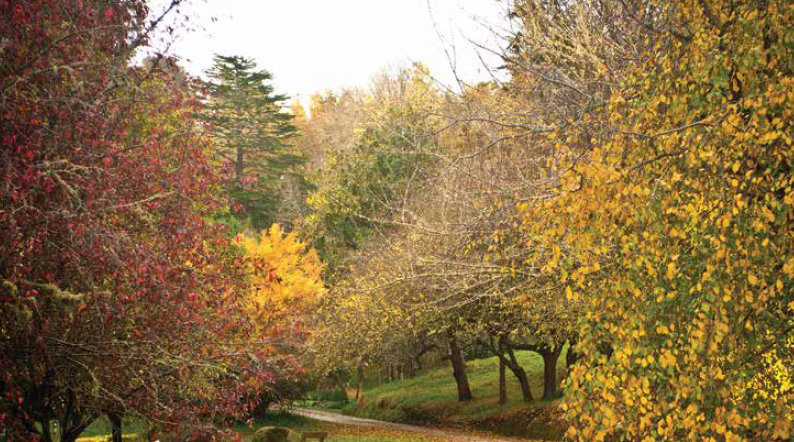 Eastwoodhill’s future is an arboreal ark for many of these species – a place to propagate new plants that might help restore species should they ever be lost in their native ecosystem. Eastwoodhill has developed itself as a wonderful destination for a broad audience.

The magic of the botanical landscape will inspire anyone who walks under it’s mesmerising canopy.

Families can enjoy the fantastic playground built a few years ago, stay in the well maintained budget friendly accommodation available, or enjoy a walk or run on some of the 25km of tracks which are suitable for any level of fitness.

Open 9am-5pm every day except Christmas, these beautiful gardens are a must-visit on your Gisborne itinerary. Eastwoodhill is well worth the effort and you won’t be disappointed.

Tags:
Previous Article
Flightseeing at its best
Next Article
An unexpected party