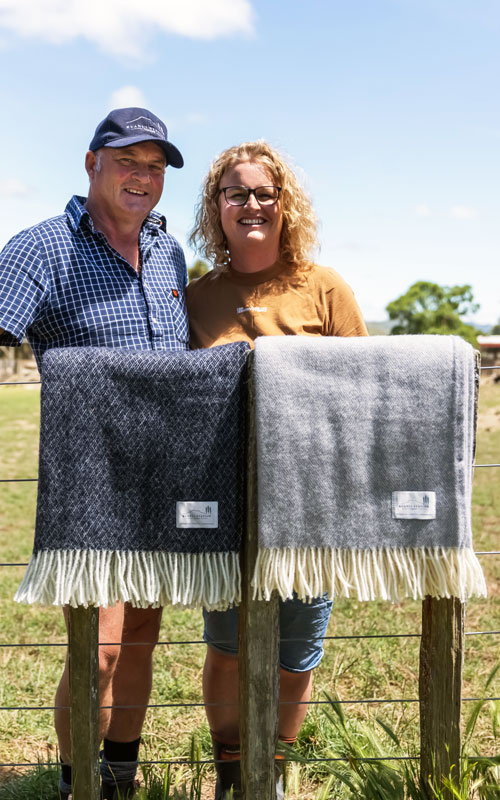 “The blankets are just a little bit different and visually very beautiful. They range from throws, to baby blankets and we have just launched a line of pet beds. The throws are lovely on the end of a couch or a bed. I sit on the couch every night with one of my blankets keeping me warm.”

While Covid has impacted heavily upon the lives of many, for one farming couple it presented an opportunity to ignite a business idea that had been brewing for a number of years.

Meredith and Andrew Carpenter operate Ruanui Station, the hill country sheep and beef station in the Rangitikei District that has been in the Carpenter family for three generations.

The couple’s four children are the fourth generation to embrace the land.
Twenty minutes nor-west of Taihape, the farm encompasses 3130 hectares with beautiful volcanic hills and a view of Mt Ruapehu as its constant companion.

Flush with rich fertile soils, Andrew farms for the environment with a mix of Angus cattle, Romney sheep and some red deer calling the property home.
While the weaners are finished on a support block in Marton, all lambs are finished on farm.

Over the years the declining price of wool has been a source of frustration for the Carpenters with a lot of wool sitting unsold in wool stores.

Over the last three years Meredith had wanted to do something productive with the finer lambs’ wool, much of which was gong to China, but the poor availability of time always got in the way.

When Covid hit last March Meredith found she had a bit more time on her hands and the idea of Ruanui Station Wool Blankets was born.

“It all happened quite quickly really. We really had no idea what we were doing or how many blankets to make. So we put two tonne of lambs’ wool into the blankets and that made 900 blankets.”

The wool gets scoured in Hawke’s Bay, spun in Lower Hutt, and then woven in New Zealand’s last remaining commercial weaving factory, which is in Auckland.

“We launched our blankets last November. The business featured on the Sunday TV programme as part of the ‘strong wool industry crisis’ story and that certainly helped propel the business. But by February this year, three month after launch, I was scratching to meet demand for some colours.”

Luxuriously soft and with fourteen vibrant colours including blues, reds, yellows and a mustard range, one of the patterns is a diamond weave that Meredith believes is unique in New Zealand.

“The blankets are just a little bit different and visually very beautiful. They range from throws, to baby blankets and we have just launched a line of pet beds. The throws are lovely on the end of a couch or a bed. I sit on the couch every night with one of my blankets keeping me warm.”

Enormously proud of what she and Andrew have achieved in such a short time frame with their beautifully soft lambs wool, Meredith says she is still quite amazed by the response from consumers.

“People just love them and they love the connection with Taihape, the connection with the land, the people and the story behind the blankets.
Post-Covid, people want New Zealand made, and they want to know where their goods are coming from. So people have really embraced it and we’ve been really busy.”

Now half way through weaving their second batch of Ranui Station Wool Blankets, Meredith and Andrew have introduced a knitted blanket to their offering.

While all blankets are sold on-line, 22 shops across the country from Auckland to Te Anau have been carefully selected to stock the blankets.

“To have had the ability to actually go and do it and for the blankets to have been received so well, it has been a dream come true really,” says Meredith.

Taking 11 tonne of fine micron lambs wool every year, there is plenty of scope for Andrew and Meredith to grow their business into the future and for many generations of Kiwis to snuggle into the Kiwi made blankets.