Going into business six years ago after being an employee was a natural progression for McCarroll Building & Construction owner Shaun McCarroll .
Central to this desire was to get ahead in life and to create something for his family, now comprising his wife Kylie and now two children aged four and six.
Shaun previously worked in Dunedin before making the move to Wanaka with Kylie to start the business.
At the time, the construction market was “pretty steady”, Shaun says.“I guess you could say it was the beginning of what is now the boom.
“When we first got here there was plenty of good, high quality work. That’s what prompted us to move here from Dunedin.
“We were initially sceptical about the move as it was outside of our comfort zones away from friends, family and our support networks.”
Shaun and Kylie have well and truly proven the naysayers wrong; their business has a steady work flow with a good amount of forward work booked and now employ four builders including an apprentice.
The company initially completed new residential builds and has also undertaken renovations, for which there has been something of a niche. “We grew our business from there through word-of-mouth really.”
Renovations require careful consideration and the ability to think outside the square to achieve a great result, Shaun says.
While renovations are normally associated with older houses, last year McCarroll Building & Construction completed a renovation project on a 12-year-old family home, designed by Chris Prebble of 360 Architecture.
“It was an award winning home, originally.” The project involved extending the existing cedar-clad double garage, which has a loft, for its new owners. 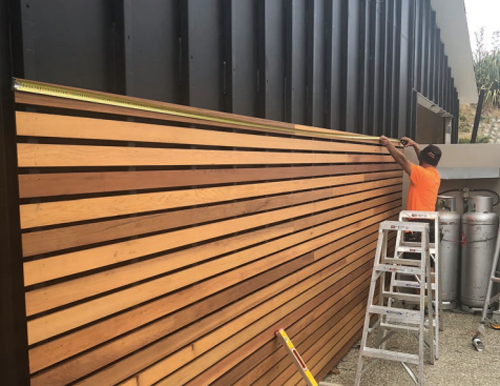 “The existing cedar had splintered due to mismanagement and not having correct treatment by the previous owners. “We actually stripped the entire building of its original cladding and recladded it.”
The large quantity of cedar required cost more than $20,000. Shaun says homeowners need to be aware that cedar cladding needs regular maintenance, whether cleaning or re-staining.
Cleaning will remove mould from the pores of the timber and re-staining about every two years will ensure it remains resilient against the harsh Central Otago climate.
“We re-stained the entire house as well at the same time and repainted all the plaster. The whole house had a good makeover.”
This year will be another busy one for the McCarroll Building & Construction team. Included in this year’s work is an architecturally designed house which incorporates SIP (structurally insulated panel) cladding for high insulation performance.
“There is a real theme for designing better than the building code requires; there’s still a market of designing to sell, but there’s also a market for designing homes that they what to be forever homes.”
McCarroll Building & Construction has been recognised by Formance NZ (SIPS manufacturer and distributor) as its Central Otago building partner. “This is a huge step for us in terms of building better and more sustainably.”
This article was brought to you in association with the following businesses…