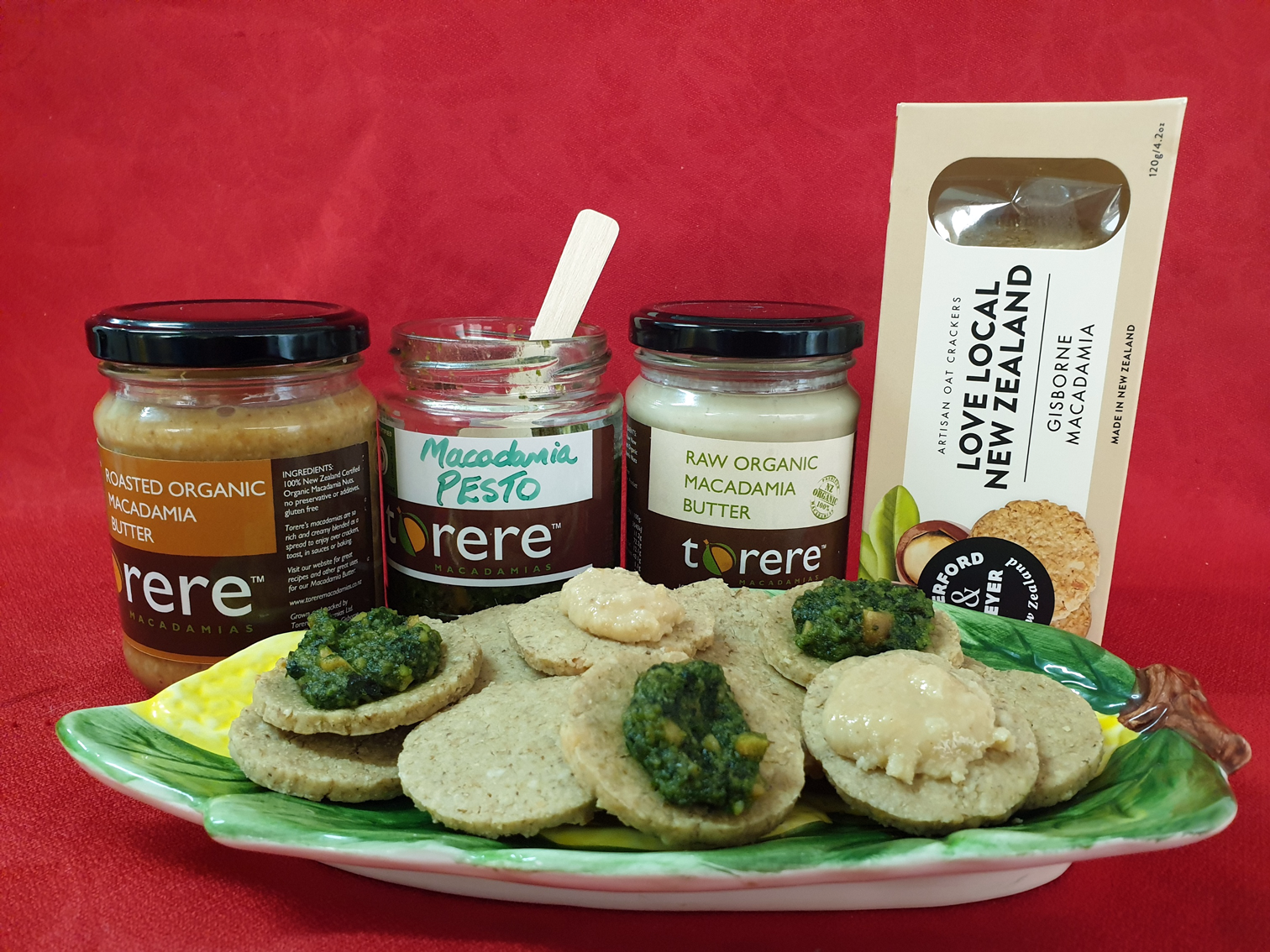 New Zealand has a long history of growing macadamias and, according to a recent International Macadamia Researchers Symposium, New Zealand macadamias are well known as the biggest and best tasting.
Pioneering modern macadamia growing in New Zealand is Vanessa Hayes, who along with her partner Rod Husband, owns Torere Macadamias Ltd.
In 1983 Vanessa started researching macadamias with the vision of planting them on Māori land in Torere, in the eastern Bay of Plenty, about 20 kilometres out of Opotiki, right on the seaside.
Encompassing eleven hectares – two hectares on the seaside with nine hectares across from the highway – Vanessa is honoured to protect and care for this land inherited from her elders.
“I love macadamias and wanted to find the best varieties to grow on my land,” says Vanessa.
“In the 1980s New Zealand imported three times more macadamias than it produced—it’s the same today.”
The first trials of New Zealand and Australian macadamias at Torere commenced in 1993 and in 2001 new varieties released in Australia were imported to add to the trials.
In 2002 Vanessa set up a quarantine facility, brought the scion wood out from Australia and built the nursery.
“The varieties grown in New Zealand at the time needed picking from the tree and had a higher sugar content and thicker shell.
“The newer varieties were high in oil with a thin shell and most importantly, they dropped to the ground. It was a great opportunity to import and trial high producing dropping varieties to replace New Zealand’s lower yielding picking varieties and develop a new commercial macadamia industry for New Zealand.”
“Initially I intended to supply other Māori land owners to replicate what we have done but it’s very hard to develop Māori land commercially. I secured sole rights for the varieties and made them available to everyone in New Zealand.”
“The nursery grew gradually but we got really carried away in 2005/6/7 and orders started to really come in and we developed the nursery to full capacity with 10,000 seedlings.”
Then came the global recession in 2008, hitting Torere Macadamias very hard. Vanessa says while the full impact wasn’t felt till 2011/12 it all but toppled Torere Macadamias.
“I also had cancer in 2012 and after a year’s recovery called my family together and told them I didn’t have the energy or resources to get the nursery going again.
“They needed to make a decision as to who would be willing to pick it up. My son, Walter, put his hand up, left his job and relocated back to Torere and started to regenerate life in the nursery.”
A five year business plan drawn up in 2013 established a number of goals including new website and branding and product development using nuts harvested from the few trees that had reached maturity, to generate income while Walter grew the nursery.
Achieving all the five-year goals by 2018 including selecting the best nine varieties, Vanessa developed a 10-year growth strategy to develop New Zealand’s organic macadamia industry, approaching Plant & Food for research assistance and applying for financial support through the Provincial Growth Fund (PGF).
Awarded $995,000 from the PGF, the allocation follows the three distinct components of Vanessa’s visionary growth strategy.
Stage one is to grow the industry from the ground up by increasing plantings and developing training and grower education.
Allocated $380,000, the funds are being used to expand the nursery including solar power and $265,000 for classroom buildings and establishing a training programme.
“In conjunction with the local polytech’s horticultural unit I’ve developed a two year level 2 – 4 NZQA training course for growing macadamias.
“That course commenced September this year and at the end the students will be qualified macadamia orchard managers.”
The nursery has now been expanded from 10,000 seedlings to 50,000 annually.
Stage two is all about science and research to verify the nutritional value of the nine varieties of the macadamia trees and to see if there are any differences between them.
“We have three research projects running with Plant & Food Research for Pollination, Early Crop Yields and Insect & Pest Tracking. A fourth project to analyse the composition of the nine varieties and develop NZ’s own macadamia Nutrition Food label has just been applied for.
The third stage is to develop harvesting and processing facilities at Torere, a grower co-operative, and to establish an organic processing factory. The $350,000 loan for this stage has not been uplifted by Torere Macadamias yet.
The funding from PGF is a real vote of confidence in what we are doing and has allowed us to implement the next three stages of our development, something we wouldn’t have been able to do otherwise.”
Vanessa’s nine-hectare block across the road from the nursery has been progressively planted in macadamia trees with the final 1000 to be planted during 2021.
Of the existing 1500 trees, 1200 are harvested with the balance used as ‘mother trees’ providing the scions for grafting in the nursery.
Last year Torere Macadamias harvested 12-tonne of nuts, though Vanessa feels this year’s harvest will be slightly down.
“We have a huge on-line presence for our macadamias. “I develop the products that I love, using our Gisborne Farmers Markets for validation of the products.
“We also supply organic outlets around the country. Rutherford and Meyer, New Zealand’s manufacturer of crackers, take about 50% of our volume.”
Perhaps in the future, we may see organic and natural New Zealand macadamias in a box with a kiwi on the front.