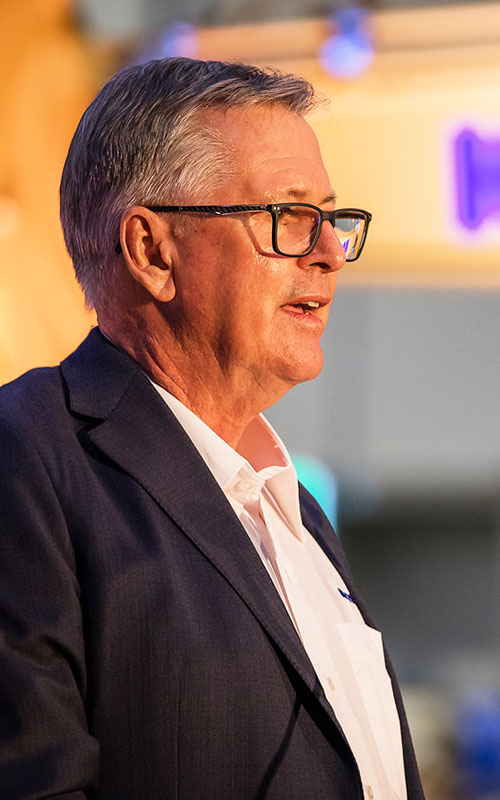 “Electrification is transforming the civil construction industry, and in the mining industry in particular we’re entering a new phase of safe operation with fully autonomous trucks that can work 24/7 without drivers.”

It was founded in 1921 to mitigate the economic impact of the closure of a copper mine in Japan’s Ishikawa Prefecture, and now, a hundred years later, construction machinery manufacturer Komatsu is a global giant employing 60,000 people, 150 of them in New Zealand.

Komatsu, based in the city of that name, was the brainchild of the copper mine’s owner, Meitaro Takeuchi, who took it on himself to create new jobs for his redundant miners, and to help Japan grab a stake in the new motorised technology that was embracing the world.

From the start, Takeuchi’s vision was based on the creation of partnerships that built his workforce’s industrial capacity through investment in core manufacturing capabilities, strategic acquisitions and revolutionary technology.

Komatsu became a classic of the Japanese company that climbed from the ashes of World War II by supplying an appreciative world with vast ranges of state-of-the-art machinery and technology, most notably in the motor vehicle and motorised plant sectors.

Komatsu’s speciality is supplying machinery for the construction, agriculture, quarrying and mining industries, everything from diggers and dozers to graders and trucks across a huge range of sizes and applications, from 1.8-tonne utility machines at the small end to 2500t draglines at the large.

The company began its rapidly-growing presence in the New Zealand market through a distribution company, called Ward Hill, that launched an Auckland agency in 1965, followed by a dedicated Komatsu South Island subsidiary in Christchurch soon after.

“We grew quickly in New Zealand right from the start, and today we have eleven operations from Whangarei to Invercargill, with the North Island entities managed from Auckland and the South Island ones from our marvellous new hub in Christchurch,” Komatsu NZ managing director Phil Pritchard says.

“Customers in New Zealand and elsewhere appreciated the quality and ever-evolving technology of our products right from the get-go, and over the last 15 years in particular that evolution has come at a snowballing pace.”

The buzzword a decade and a half ago was telemetry, the gleaning of as much information as possible from the machines themselves to understand the mechanical status as well as the productivity and loadings under which they operated.

“Telemetry has been like gold to Komatsu,” Phil says, “because it allowed us to see our products in a new light, and to make them even more relevant and responsive to the needs of our customers.”

It was also a factor in the company’s early involvement in the hybridisation of motor-powered machinery, such as the capture and re-use of energy that would otherwise be wasted, and power plants driven by a mixture of diesel and electricity.

The evolution has continued at a pace that can be measured in the fact that, by Christmas this year, Komatsu NZ will be revealing its first fully-electric excavator.

“Electrification is transforming the civil construction industry,” Phil says, “and in the mining industry in particular we’re entering a new phase of safe operation with fully autonomous trucks that can work 24/7 without drivers.

“We call this technology iMC, for intelligent Machine Control, and it’s aimed at making our machinery, such as excavators and diggers, easy and safe to operate without specialist training.

“It’s all got to be super-safe, and it’s an immensely exciting field to be working in.”

Besides the marketing of a new plant, Komatsu NZ has a major stake in the refurbishment and sale of used equipment, backed up by its localised service operations throughout the country.

Komatsu NZ is part of the parent company’s Oceania Group, which takes in Australia and New Caledonia, and it’s joining with them this year in celebrating the global company’s centenary.