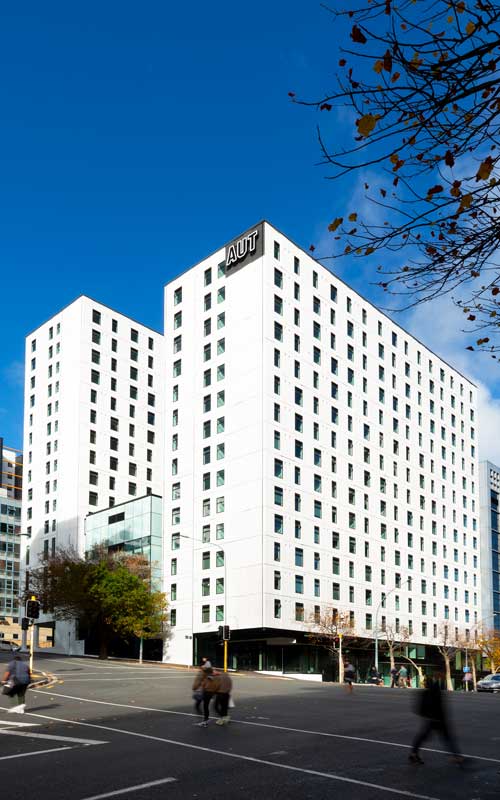 “In addition to the superb Icon team, many subcontractors also put in a magnificent effort and provided the backbone to finish the project to a high quality.”

Two new 16-storey towers in Wakefield St, Auckland have provided a tremendous boost for Auckland University of Technology’s student accommodation, facilities and services since project completion in February 2021 this year.

Icon Co Pty (NZ) Ltd is proud of its role in delivering a practical design and construction proposal that achieved the client’s requirements.

Faced with budget and programme pressures after a competitive tender process with others, the development’s owner Cedar Pacific engaged Icon under an intensive eight-week ECI process to comprehensively analyse the project’s design.

An alternative structural design solution was developed, enabling Icon to successfully deliver the design and build in line with cost and programme constraints.

Constructed using reinforced concrete walls and columns with post-tensioned slabs, the AUT towers were finished with precast façade panels featuring punch windows, and with curtain walls to the podium.

With both towers built at the same time, double the normal plant was deployed on site and two complete sets of perimeter safety screens were also required. The two towers and podium allowed separate resourcing of multiple work fronts, resulting in a massive team of over 400 workers on site daily for an extended period.

Given the large number of studio apartments, modularisation and off-site manufacturing was pivotal to the success of this project. Fully finished bathroom pods were delivered from Australia, precast panels were manufactured in Pokeno (where they were also painted and windows installed), reinforcement was largely prefabricated off-site and internal joinery was modularised.

A web-based logistics booking tool was commissioned to enable effective scheduling of all deliveries, hoisting and crane lifting requirements.

Being bounded by roads on all four sides, the site was very constrained. Site logistics were carefully managed to ensure work could proceed safely, with perimeter screens also closely monitored. A big effort was put into maintaining a clean, orderly site.

Icon Co project managers Gary Nisbet and Blake Hogarth were honoured for their leadership of the AUT project at the 2021 NZ Building Industry Awards, receiving both an excellence award and the overall category winner for projects over $75 million.

Receiving NZIOB awards recognition for this project was both an honour and a surprise for Icon PM – Construction, Blake Hogarth, who said it would not have been possible without the hard work of the wider project team. He extended special thanks to the Icon team and project subcontractors.

Project manager Gary Nisbet echoed the sentiment: “In addition to the superb Icon team, many subcontractors also put in a magnificent effort and provided the backbone to finish the project to a high quality.”

Icon Co team members received two other accolades at the NZ Building Industry gala awards night: an Excellence Award to Ben Wrigley and Richard Mckie for the Pacifica Apartments project; and Highly Commended Award to Edward Lazenby and Paul Beukman in the Safety Excellence Category for the Voco-HIE project.

Icon NZ Director Dan Ashby was delighted at the team’s award winning success: “In our first year with completed projects, it is great to see members of the Icon team getting this well-deserved recognition for the great work they do. Congratulations to winners and the project teams they represent, to the other Icon finalists, and to all finalists and winners – a true representation of the great talent in our industry.”

Established in mid-2017, Icon Co Pty (NZ) ltd is a subsidiary of the Melbourne based Icon Group, owned by the Kajima Corporation of Japan.

Launched in New Zealand with a commitment to becoming established as a leading contractor of choice, Icon NZ delivers a diversified range of construction services tailored to the local market and informed by market leading initiatives that reflect the group’s global reach.

Icon NZ has a strong focus on achieving outstanding delivery of complex projects of scale and has an exceptional team of 90 handpicked construction professionals.