Expansion to cope with growing demand

A significant expansion of Metalcraft Roofing Wellington’s facility has given the company greater manufacturing capacity, shortened lead times for customers and increased efficiencies, says Wellington branch manager Bill Millar.
He says that Metalcraft Roofing Wellington has been operating at capacity for the past several years with limited ability for advance manufacturing of product for customers.
As the expanded facility now offers four loading zones compared with one, customers can also pick up and load product quickly.
“We had to schedule manufacturing times on the roll formers very carefully. Completed long run jobs had to be dispatched as quickly as possible to allow us the room for the next runs. There was simply no room left to run and hold completed jobs,” he says.
The floor plan of the facility has now essentially doubled to 3200sqm and Bill says that the increased space will reduce lead times and allow for greater efficiencies in stock management while also allowing the branch to hold ancillary products such as fencing, which is manufactured in the Metalcraft Roofing Hastings facility, and rainwater goods manufactured in Tauranga.
The relocation of the folding and fabrication divisions to the new factory footprint, along with the introduction of new machinery in the folding operation, has speed up this part of the process with more automation and increased accuracy.
A full refurbishment of the office area along with an increase in admin floor space has allowed several key staff placements to be implemented including sales support and a production planner.
With the imminent introduction of a new enterprise resource planning business process management software programme, using a system of integrated applications to manage the business and automate many back office functions related to technology, services, and human resources, the whole sales process from the placement of the sales order, to pick up or delivery becomes much more customer centric, says Bill.
Metalcraft Roofing is New Zealand’s largest and most established privately owned building product roll former and installer. Metalcraft Roofing has been in operation since the 1950’s and originated in Palmerston North.
The company has branches nationwide offering a large range of long run roofing profiles, custom- made steel flashings, lightweight metal tiles, metal fencing and rainwater system solutions to suit any style of home or commercial building.
Products include well-known names including Galvsteel, Zincalume, Colorsteel Endura and Colorsteel Maxx. The company’s standing seam roof profile called Espan has been growing in popularity in the Wellington Architectural Community, says Bill.
Espan has been designed with style and performance in mind and has high ribs that create strong defined shadow lines and combined with concealed fixings provide for weather performance.
Espan also has an innovative clip system that allows for concealed fixings.
Because Metalcraft Roofing offers long-run roofing profiles which are all manufactured from New Zealand Steel products, customers can be assured that the products are of the highest quality, says Bill.
He sys that this focus on quality is important to Metalcraft Roofing’s nationwide supply and install offer, which is fully backed by solid material and installation warranties providing customers with peace of mind. 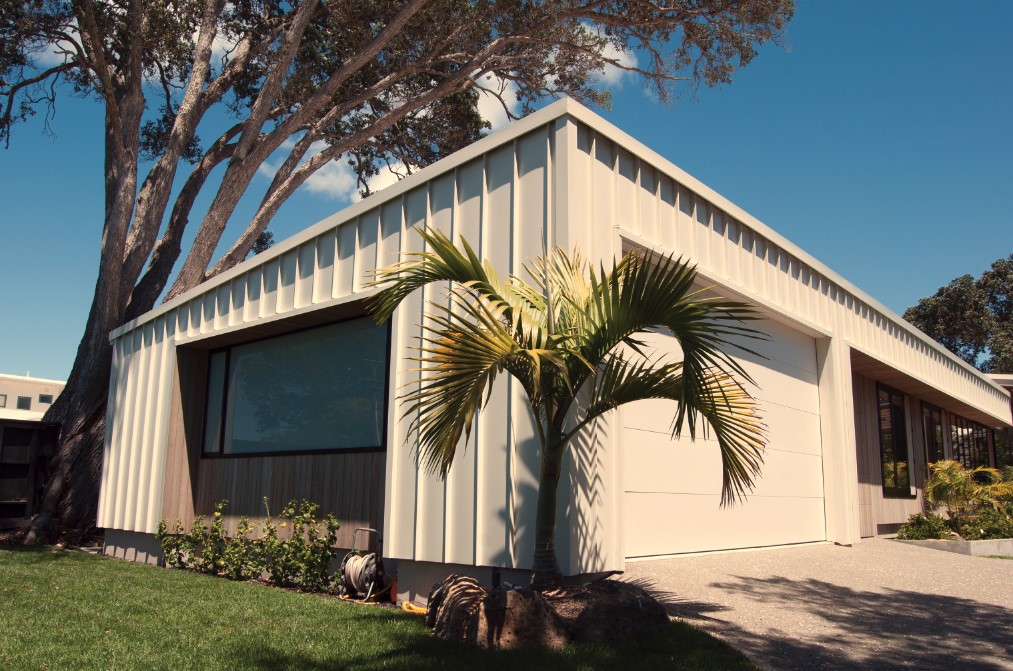