New Plymouth’s Chris Bell Construction has recently completed a benchmark project with the construction of the new Gill Street Motel, with 31 units and a manager’s apartment across three levels and on-site car parks.
Chris Bell Construction project manager Joe Menzies says at the time of taking the project on, it was one of the largest projects the company had ever worked on as main contractor in its 11 years of operation.
“Its successful completion has given us a sense of the size of projects we can tackle,” Joe says.
“We’ve since moved on with a couple of larger projects, but Gill Street Motel has been a stepping stone, a benchmark from which we can move forward to tackle not just small commercial jobs, but bigger ones as well.”
And the clients are delighted. “Gill Street Motel has been very busy since it opened. Their vision has come to fruition in terms of the no vacancy sign that’s always on out the front.”
Joe says the project made great use of its small parcel of land in the central city, and of the main design elements by project architect BOON to retain and showcase the existing building structure and materials has allowed the site and its area of the central city to retain some its history.
“The build began with the demolition of an existing building which was deemed to be beyond repair, and the partial demolition of another building to prepare it for a full upgrade.
“We left the bulk of the structure in place and installed a large amount of structural steel for earthquake strengthening, as well as cutting out a large opening for sliding doors leading to a deck area outside.”
The existing building was converted into studio rooms, several of which have mezzanine ﬂoors.
The tight central city site had it challenges with access and a lot of passing foot trafﬁc, so site security, trafﬁc management, and health and safety programmes were all in place well before Chris Bell Construction even stepped on to site.
Chris Bell Construction had previously worked for the Gill Street Motel owners, and Joe says that the company won the tender for the project on the strength of the overall package that the ﬁrm offers to clients. 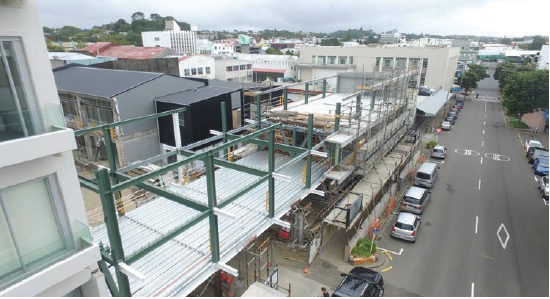 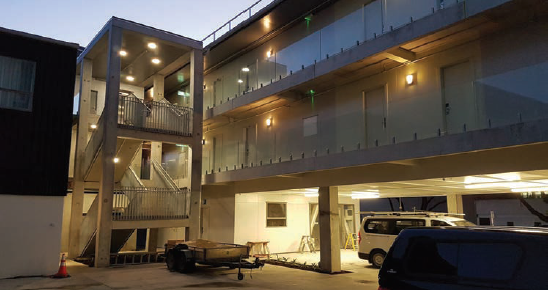 “We could offer our history in commercial, industrial, and high-end residential building, our workforce, our relationships with key subcontractors within the Taranaki region, our resource capability, and our general proﬁle,” Joe says.
“Our staff of 24 and our key subcontractors can complete tricky jobs. “They are people who don’t just think about their next task, they think about the overall aspect of the job and what it means for everyone working on it,” he says.
This article was brought to you in association with the following businesses…