Celebrating a decade of forestry excellence

The 2019 Eastland Wood Council Forestry Awards highlighted the depth and breadth of skill in the industry.

New Zealand’s first forestry awards took place 10 years ago in Gisborne and have now grown to encompass a number of regions around New Zealand.
The 2019 Eastland Wood Council Forestry Awards highlighted the depth and breadth of skill in the industry, with judges commenting with how far the forestry industry had come over the years and just how professional it was today.
“What is really notable for me is that having been involved in this since year one, is that we are not searching for excellence anymore,” says chair of judges Sheldon Drummond.
“In a lot of these categories, there is real and genuine excellence which just wasn’t in the industry when we started harvesting in 1985-1986.
“The industry has certainly developed and grown. Our people are everything and we need to continue to encourage and celebrate their achievements and excellence.”
Tapu Dixon from Blackstump Logging took out the top award of Skilled Professional of the Year as well as winning the Summit Forests Harvesting Excellence Award.
Other winners included Warwick Wilshier, who was recognised as the inaugural Eastland Wood Council Industry Champion.
Warwick has worked in the industry for four decades and owns Williams & Wilshier and is in partnership with Calvin Paddon with the company Pacific Haulage.
He was honoured as the champion of the industry for his huge contribution, particularly to log truck safety. His own company also won the trophy for outstanding health and safety management as well as Hikurangi Forestry Farms Training Company of the Year, with his Pacific Haulage employee Peter Muir taking home the MITO Distribution Excellence Award.
Big Bark Logging featured in two categories with Brian Deam winning the PF Olsen Construction Excellence Award and Matt Mackintosh the Ernslaw One Faller Excellence Award.
Ernslaw One’s Megan Costello was the winner of the inaugural Gough Cat Woman in Forestry Excellence Award. Jack Kuru, another longtime veteran of the forestry industry, won the Eastland Port Roading Excellence Award.
Kim Holland, the chief executive, of the Eastland Wood Council, said getting to 10 years was a significant milestone, not just for the region but for the industry, and they are taking the opportunity to take a break for 2020 with a view towards a ‘refresh’ of the awards in 2021.
Awards Growing
Forest Industry Contractors Association CEO Prue Younger, who was one of the original instigators of the awards, says the awards have now grown and spread from region to region, even across the Tasman to Australia.
“The awards really bring the industry together and give everyone a chance to network and celebrate achievements,” she says.
She hopes that more regions in New Zealand and Australia will continue to come on board and hold their own regional awards.
She is a big advocate for keeping the events regional.
“That way it doesn’t become so much a competition but more about celebrating the forestry achievements of those industry heroes locally.

Trifecta for women in forestry

Kere Elliot’s recent win at the Hawke’s Bay Forestry Awards means that women have clearly dominated the awards in 2019 taking out the top award in three regions.
The Skilled Forestry Professional of the Year award was won by Kere from Elliot Logging, Heather Arnold of Nelson Forests in the Top of the South Forestry Awards and Michelle Harrison of Wise on Wood in the Northland Forestry Awards.
Forest Industry Contractors Association CEO Prue Younger says this highlights how more women are entering the forestry industry and the obvious skills they bring to the job.
Tree felling and auditing specialist Kere has been involved in Pan Pac harvesting operations for many years. She has worked her way through all aspects of harvesting operations firstly as a worker and employee, to running a harvesting contracting crew with her husband Grant, as well as providing auditing and training services to the wider Pan Pac contract workforce.
“The tree felling auditing and training that Kere carries out is a key component of ensuring that all our tree fallers are working at the safest and highest possible level in one of the most hazardous tasks to be completed,” says Tim Sandall, general manager forests at Pan Pac, Napier.
The 2019 Hawkes Bay Forestry Awards were the inaugural forestry awards for the region. Keith Dolman, CE for the Hawkes Bay Forestry Group says that the company’s decision to implement the awards was on the back of the other regional campaigns being such a positive success for the regions and their people. “Hawke’s Bay is an area for growth in this sector and it’s important that we celebrate our own successes.” 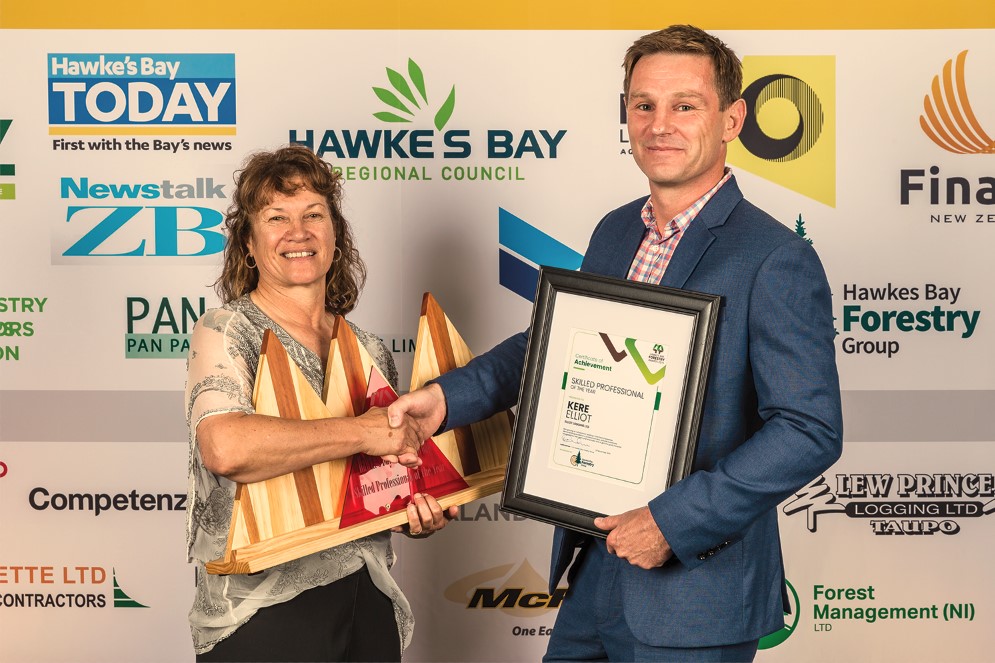