The locally made brick cladding is one of the building’s main architectural features with the bricks laid in a variety of different patterns.

Christchurch’s Citycare Property is proud to have been awarded a silver civic project award at the 2019 Registered Master Builders Commercial Project Awards for its work on the new Woolston Community Library, a building which em-bodies Woolston’s industrial past while also taking a transformative step in the renewal of Ferry Road.

Christchurch City Council’s brief was for a community facility made up of a volunteer library, a community hall, a small meeting room, and public toilets.

The architectural team was keen to capture the history and the architectural vernacular of the area in the new building and provide a welcoming, us-able space for its people.

The resulting building is a clever piece of urban architecture which has injected new life into Woolston’s main street.

It’s locally made brick cladding is one of the building’s main architectural features.

It has been laid in a variety of patterns, and on the western elevation, the bricks creep out from the wall in a staggered pattern.

For the project’s main contractor Citycare Property, the building was small but complex, containing every heavy commercial construction component from precast concrete tilt panels to structural steel to brick.

It is located in very close proximity to the building next door, and on digging down the team discovered a foundation supporting one of the neighbouring walls.

“We had to make sure we protected the building next door. We did some investigation and some intricate planning, and we questioned our engineer. If there is a future earthquake event, our building will hold the other wall up.”

Grant says this project’s client, consultants, and architect comprised one of the best teams he has ever worked with.

Fortnightly Project Control Group Meetings had any anomalies or concerns worked through and solved together.

“The awards are the cherry on the top, but the best thing is coming out of it knowing you finished on time, and that yourselves, the client, and the consultants all still get along,” he says.

“That doesn’t always happen. We all worked together as a team and that benefited the successful outcome of this project. Everyone was working towards the same goal and that’s why it went so well. We have a happy client and the people operating out of the building are stoked with their new facility.” 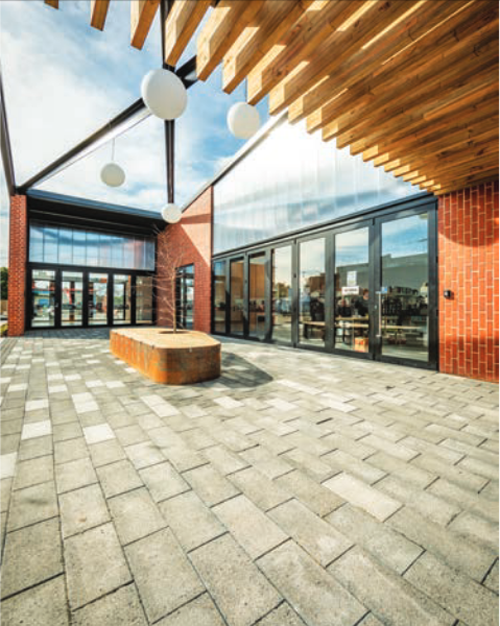 The new Woolston Community Library is a clever piece of urban architecture which has injected new life into Woolston’s main street.

The carpentry component of Woolston Community Library was subcontracted by Citycare Property to Rowlands Building.

“We knew we going to get great service, a good quality product, and they helped us to deliver the project on time.”

Grant says Citycare’s has been in commercial “The awards are the cherry on the top, but the best thing is coming out of it knowing you finished on time, and that yourselves, the client, and the consultants all still get along.”

construction for more than five years with Citycare Property.

The small team has been busy managing projects at Christchurch airport for more than a year, and is also busy on Ministry of Education projects at Bamford, Linwood, and Sumner Schools.

“We’re only a small group but we do good work, everyone here is proud of what we do, and we have more work coming to us because of that.”