The second phase of the project involved construction of a new playground next to the harbour’s edge in the centre of town.

The recently completed upgrade of the Whitianga Town Centre is a credit to all involved says Thames Coromandel District Council spokesman, Andrew Boden.

The $8 million dollar project involved upgrading water supply, storm-water and reticulation infrastructure and also realigning the road which had a significant camber. Upgrade ducting for ultra-fast broadband was also laid, while a plaza space was created as a community focus area.

The second phase involved construction of a new playground on the site of the original playground next to the harbour’s edge in the centre of town and at the same time widening footpaths and creating some small new roading.

Andrew Boden says the project was delivered on time and on budget with a key focus on keeping the community informed throughout all stages of the development.

A project of this nature needed to be managed in stages and Andrew says that planning for the approximately $8 million project actually got underway about 20 years ago. The project had to wait for funding to be secured in the council’s long-term-plan with the contract put out for tender late 2017.

“We were fortunate to have a very good main contractor who made it a priority to employ local sub-contractors and suppliers,” says Andrew.“So in a way, the funding the council was investing in Whitianga was to a greater degree staying in the town and going to the people who lived there,” he says.

Andrew says the road alterations have made a big difference to the town centre.“It almost felt for people crossing the then wide street that they were walking up hill to get to the middle of the street, so the decision was made to reduce the road’s width and flatten it.

“This gave room for a natural increase in the width of footpaths.”Andrew says weekly public meetings which included stakeholders and Dempsey Wood Civil, principal contractor were a pivotal factor in helping businesses cope with months of disruption.

“This really underpinned why the project went well. Every week, the local paper communicated on current progress and this was tremendously appreciated by Council. “Then our comms people also provided information out in a number of ways on an ongoing basis. 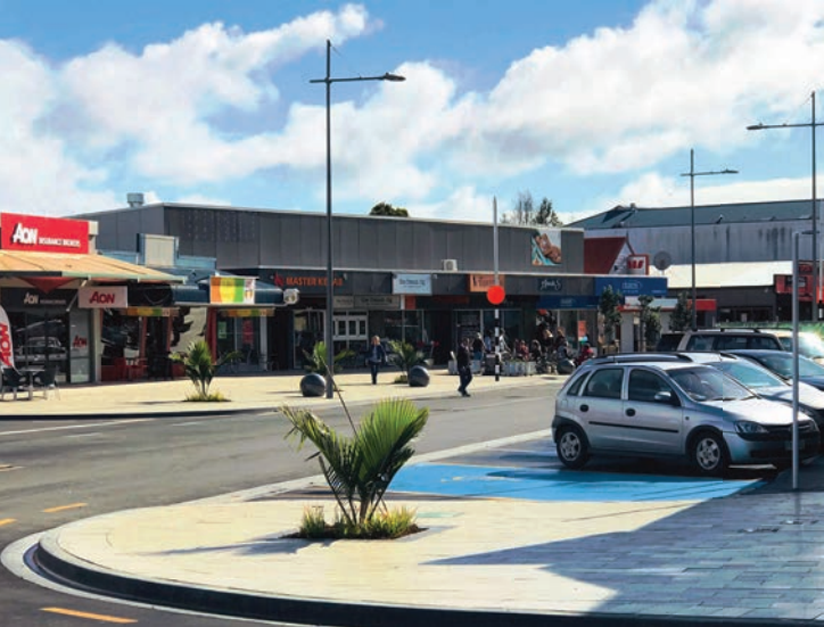 The $8 million dollar project involved upgrading water supply, storm-water and reticulation infrastructure and also realigning the road which had a significant camber.

“When people know what has been done and what the next step is, it really helps.”Even when it came to losing existing carparking spaces, the council ensured at least just as many carparks would be available scattered around the town centre.

The second phase of the project involved construction of a new playground on the site of the original playground next to the harbour’s edge in the centre of town and at the same time widening footpaths and creating some small new roading.

Andrew say that the council’s landscape architect Boffa Miskell from Tauranga did a great job creating the concept theme for the playground and the delivery of the actual plan by Hamilton company Playground Creations was a highlight.

“They did an excellent job interpreting the brief which was a nautical theme. “Having the new playground officially opened in July was a celebration in itself.

“There were so many children playing on the structures that you couldn’t actually see the play-ground,” says Andrew.He says the $1.8m budget for the playground area is money well spent with the community benefitting from resources that have impacted really positively for locals and visitors alike.

Andrew says the Council has ongoing commitments to upgrading roading and lighting and two other important projects, a new refuse transfer station currently in design phase and completion of a new water-treatment plant.

“The whole Coromandel Peninsula has works programmes large and small and we’re currently doing a similar re-cambering and upgrade of Coromandel’s main street.”

Tags:
Previous Article
Another feather in the cap for ATL
Next Article
New hub for growing community