A local project using local skills and labour was extra special for its architect Sally Woods when commissioned to design an interior renovation for a 1970’s church, which had been designed by one of her architecture tutors from 20 years ago.

Sally, of Unit 7 Architects, was approached by Johnsonville Uniting Church’s property council to design seismic strengthening and an update to the church’s interior.

On visiting the church, Sally was excited to quickly recognise that it was designed in the early modernist New Zealand style, by Bill Alington. “He is an amazing modernist architect of the time, and tutored me at architecture school about 20 years ago,” she says.

“The other thing that re-ally got me interested in the project was that it was built in 1976, and there was an addition in 1991 that was in keeping with the original design. “Other than that, it hadn’t been messed with too much so it was quite pure. It’s a lovely design and I didn’t have to work too hard to make it good again.”

She says the church’s construction from robust materials including concrete block and terracotta roof tiles had allowed for ease of maintenance, and its conscientious property council had maintained the building well.But its interior was dated and dark.

“We brightened up all of the colours, put in new finishes including flooring and blinds, and we reconfigured the toilet area from separate male and female toilets to unisex toilets.”

The church also serves as a community centre and is in use almost every day by other community groups including an after school programme. Its high level of usage meant the building’s new interior had to be easy to use and robust.

The property council considered the after school programme quite heavily in their design decisions. “They use it almost every day except for the holidays, so a lot of the design was around what would serve the greater community,” Sally says.

The religious motif in the building is somewhat understated. A rimu cross with a bronze plate finish adorned the vaulted rimu ceiling. Sally felt it was easy to miss as it blended in with the ceiling, so part of her proposal was to add a crisp white painted background to mount the cross on with backlighting. 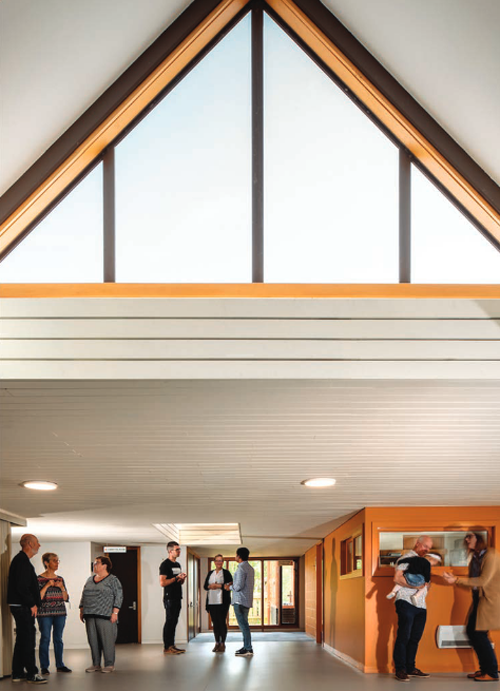 “That has really made it pop, made it feel more uplifting, and provided a focal point for the space when it is being used as a church.” Johnsonville Uniting Church originated in the 1970s by two combining churches.

One of those brought a rose window from its old building, which was reinstated but in an awkward spot. Part of Sally’s brief was to find a better spot for the rose window, one where it could be naturally backlit by a window behind.

Sally says it was nice to work on a project close to both her home and office, and to have the assistance of the church’s property and finance councillor John Craig, who had also been involved in the original design and was able to provide a wealth of background information.