Tuatara’s design and construction methodology gives them a cost-competitive edge in the market.

When Jordan Frizzell established his structural steel design and build company Tuatara Structures in 2015, he had a clear vision of what he wanted to achieve.

His goal is to become New Zealand’s leading design and build, commercial and industrial construction company explains Jordan. “We don’t want to be the biggest, but we want to be the best.”

Three years later they’re well on their way with builds throughout the South Island and plans to expand into the North Island as growth permits. Tuatara’s innovative design and construction methodology gives them a cost-competitive edge which the market has been quick to recognise.

At the heart of their success is their signature approach to their design and build business which involves providing a ﬁxed price build contract from the concept stage.

Their stream-lined construction methodology together with their established relationships with engineers, architects, and sub-contractors ensures the builds can be completed on time and within budget.

Apart from growing a reputation in the market, Tuatara has also grown a very efﬁcient team.

Jordan is a strong believer that the key to any business success is having the right people in the right seats. This he believes has been the key to Tuatara’s current and continued growth.

“We’ve got over 150 years of construction between us and we enjoy dealing with our customers face to face,” says Jordan They’re in the middle of constructing the ﬁrst ﬁve buildings in a 15 lot commercial development in Frankton for M Space Developments, a Brisbane- based company with a strong commitment to the Queenstown region.

The efficiencies offered by the construction of ﬁve buildings next to each other, combined with Tuatara’s streamlined approach to construction, offers a win- win to the developers, the owners and eventual tenants of the buildings.

As Jordan explains: “By using the same subcontractors across all ﬁve projects has enabled efﬁciencies. This in turn reduces our build costs which we pass on to our clients.”

The key success on this project is being able to work through Colliers agents directly with the tenants to come up with custom-made premises for each end use.

“We work with the business who’s going to occupy the building. We consult with them, understand their needs, and come up with a bespoke and design with a ﬁxed price build contract right from the start.”

Whether it’s a nationwide brand such as Plumbing World, or a local tile shop looking for showroom space combined with warehouse storage, the occupiers have already worked closely with the Tuatara team to get it right.

“We might do multiple revisions of it before we can actually sign a contract but it is important that we get it right and it’s exactly what the client wants,” says Jordan.

“The client gets a custom made building, MSpace sell their land and building packages, and we’re building our buildings. It works for everyone.”

They’re achieving rapid growth through referrals and repeat business and have already gained a reputation for the successful and speedy delivery of exactly what the client wants.

By offering a full turn key package, Tuatara Structures are not only able to take it from concept to completion, but are in a position to quickly follow through.

“We’ve actually had a building built and completed for our clients before our competitors even got back to them with a quote.” 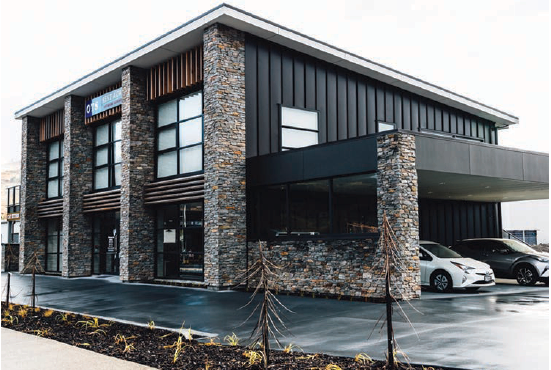 Apart from growing a reputation in the market, Tuatara has also grown a very efﬁcient internal team.

With the development of efﬁcient systems and process management, Tuatara is well established to continue to deliver robust and reliable delivery at every level.