Con and Rosie with Rosaline, Harry and Violet. Con (second from left) with Rosie and Violet.

When Rosie McCarthy set eyes on the land at Whenuanui on the Ruawai Flats in Northland, that would become the family farm for the next 106 years, she turned to her husband Con and said, “Forget all about it!” The land was 75 acres of crown land that Rosie had successfully drawn in a ballot in 1913.

A true pioneering woman, Rosie was one of 427 entrants in the ballot making a wish on 29 sections – prime land with a renewable lease for 66 years and 2/3rds. With no road to the farm, Rosie and Con had to find their way through thick rubbish left after the bush had been cut out.

The land’s rich alluvial soil was covered with stumps and heads of worked kahikatea forest, with partly burned under-scrub, raupo and cabbage trees.

Daunted by the experience, Rosie and Con left their precious land, not returning until two years later when told if they did not, they would forfeit the lease.

Of strong Irish stock, Rosie and Con had travelled half way around the world to be together and form a new life on the land – and they were not about to give it up.

Though of English descent, Rosie Sheppard was born and brought up in the city of Cork, Ireland. At the age of 35, suffering from rheumatism she came to New Zealand to ‘take the waters’ at Rotorua, arriving in 1911.

Con McCarthy, hailed from the farmlands of Cork and was Rosie’s sweetheart – had been for seven years.

It was love fraught with difficulty; she of methodist faith; he an Irish catholic. Determined to be with his sweetheart, Con arrived in New Zealand in 1912, forfeiting his inheritance, the family farm and breaking his father’s heart.

Rosie and Con were married in St Michael’s Church on the shores of Lake Rotorua in 1913 – Rosie converting to catholicism.

So, with Irish determination and courage, and the threat of losing their precious land, Rosie and Con returned to their farm at Ruawai Flats with renewed determination to build a cottage and farm the land. 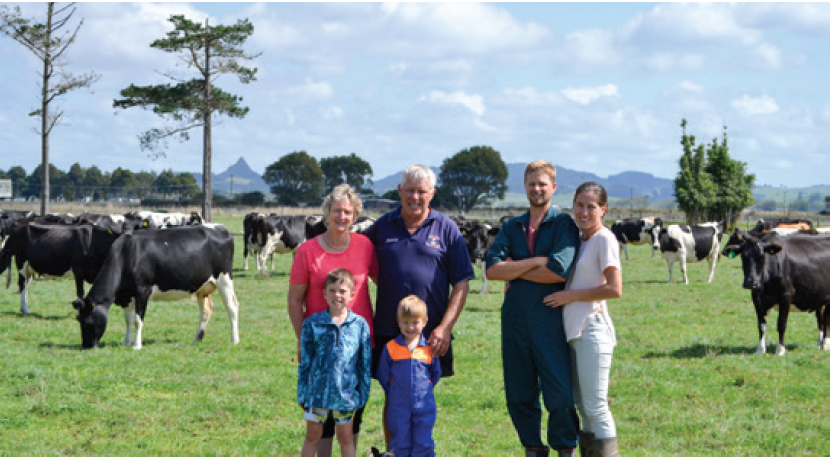 Suzanne and Tony Oud with son Luke and his wife Sunshine and their two children Max and Willem. Tokatoka landmark can be seen in the left background.

To get timber to the section, Con carried it on his back from where the road ended. Men were men, in those days. With cottage built, Rosie and Con moved in, clearing land by day and lining cottage walls by night.

Despite being plagued with rheumatism throughout her life Rosie worked hard, loving to do all she could to help.

Tree stumps had to be removed from the ground and on bright moonlit nights Rosie and Con kept working till the wee hours, improving the land and eventually putting it into maize and pumpkins – the order of the day on a lot of farms.

Maize shelled on the farm was bagged and sent to Auckland by boat, along with the pumpkins grown around the outside of the maize crops.

In 1929 a frost destroyed the crops and that was the start of dairy farming for Rosie and Con. Community minded and working hard with determination, Con and Rosie raised three children; Harry, Rosaline and Violet.

Over the decades the farm has stayed within the family, threading through the maternal line with strong women to the fore. Taking the reins from Rosie and Con was their youngest daughter, Violet.

War widowed at 22 in 1942, Violet ran the farm alongside her father and in 1947 bought the lease, running the farm on her own, while also caring for her ageing parents.

Despite Violet’s capability to run the farm alone, her brother brought a young chap to help on the farm. He had ginger curly hair and wore a blue shirt.

The story goes that Violet took an immediate liking to him and was later told by a neighbour that she had dreamed of Violet with the ginger haired young chap with the blue shirt – a dream come true and meant to be.

The young chap was John McLeod, nine years Violet’s junior, and the couple married in 1950 farming together, adding 55 acres across the road in 1969.

Devoted to each for the rest of their lives, the couple raised seven children, the youngest of which was Suzanne, who would become the next strong willed woman to run the farm.

Suzanne says Violet had enormous strength of character and resilience to have done what she did over the years.

“So not only did she look after the farm,” says Suzanne, “she nursed her elderly mother until the day she died, raised their seven children and was deeply involved in many community activities.”

Suzanne’s husband Tony Oud says that his wife is from the same Irish stock. “It’s that stubborn Irish breeding.

“At the end of the day it’s often the women on the farm that hold it all together and without them I don’t think a lot of these farms would survive.”