A recently completed purpose-built and highly-engineered operations building at the eastern entrance to the Homer Tunnel near Milford Sound last winter became the new base for a specialised crew of the Milford Road Alliance.

The building ensures the safe operation of the Homer Tunnel and State Highway 94 access. The team also manage the avalanche programme, rockfall monitoring and daily management of the tunnel and Milford Road.

It had taken some time for all operations to be shifted over into the new structure due to the complexity of the systems involved after the centre was finished last summer.

The new building replaced an aging building, locally called ‘the Chapel’, which had evolved over many years from a grader shed to housing key systems and Alliance staff for managing the Homer Tunnel and avalanche control programmes and this has now been removed.

All road management, incident response and maintenance facilities in the alpine area have shifted to the new operations centre site.

Key systems, that keep tunnel users safe include cameras, radar, sensors, thermal imaging, lighting and communications, are all closely monitored by dedicated teams based in the operations centre.

Tony Brand Building from Te Anau was the main contractor for the year-long building project which began in the summer of 2017 and finished last summer.

Tony Brand says despite the huge challenges of working in the extreme alpine environment, the 100km daily travel each way and numerous down days when the road was closed due to snow or avalanche risk, the project had been “extremely satisfying” especially given its beautiful location, and the centre was “built to last, for sure.”

“We are proud as a local business to have been involved in a build like that in our area. And it’s very satisfying to see the finished product,” says Tony. 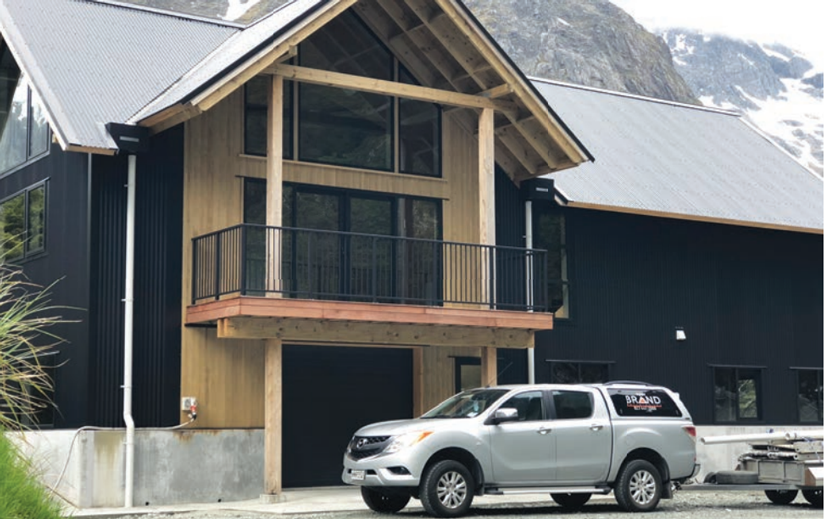 The new operations building at the eastern entrance to the Homer Tunnel near Milford Sound is now the base for a specialised crew of the Milford Road Alliance.

Day-to-day management of SH94 in Fiordland between Te Anau and Milford Sound is the responsibility of the Milford Road Alliance, a partnership involving the NZ Transport Agency and Downer NZ.

The alliance’s responsibilities cover all highway management and maintenance functions for the Milford Rd which carries over 1 million visitors per year and passes through some of the most challenging terrain in the country.

Milford Road Alliance manager Kevin Thompson, of NZTA, says Tony Brand Building had delivered a high quality product. “My team are really appreciative of the look, feel and space of the new building,” he says.

“Tony’s team experienced some real, I’d say, hardships, because of the winter, snow, rain and mountain conditions, and they got the job done,’ says Kevin.

The building was designed to very high engineering specifications because of earthquake and avalanche risk, and snow loading associated with the area.

The 300 square metre building resembles an alpine lodge, and features flaxpod COLORSTEEL® exterior, and exposed beams and ply interior linings in the upper of the three levels and had a build cost of approx. $1 million.

Around half a dozen carpenters, and other sub-contractors worked on the year-long project in the Fiordland region, including Tony Brand and his sons Troy and Joel.

Tony says it was good to work in conjunction with Downers NZ and NZTA in the overall project which was essential in the management of an important tourist highway.

Because of its location in rugged alpine terrain, the new building is designed to withstand the area’s harsh climate and is self-sufficient in terms of power and communications.

Tony moved his family and business to Te Anau around 15 years ago and works mostly on residential and light commercial projects.

They offer a complete “design and build” service, working closely with an architect and draftsman, and supplying all subcontractors so that a building can be completed from “ground work to carpet and the key in the door,” says Tony.

Their current project is 23 new houses – of which ten are already finished, at the Murchison Retirement Village in Te Anau. The project is due for completion in about a year.

Tags:
Previous Article
Commercial opportunities on the rise
Next Article
Clients urged to get online with system

New base in Wanaka for vet clinic
Shanaka Prasad Mar 21