Richard Brown: “The site has the potential to produce four to five thousand bottles of wine a year.”

Richard and Jennifer Brown are proud owners of the boutique Tironui vineyard nestled on terraced levels above Mission Estate, just outside Napier in Hawke’s Bay.

“We are close to the city, but get the most fantastic views out over Napier to Cape Kidnappers, Te Mata Peak and even the Mahia Peninsula on a very clear day.’ Richard says.

Richard and Jennifer bought the 1.74 hectare site in 1999, initially thinking it would become a life-style block, however Richard says the potential of the site to grow wonderful grapes soon became apparent.

They committed to developing the site first by adding terraces that hug the curve of the hill, which creates its own unique micro-climate.

“We started the vineyard from scratch and are very proud of what has been achieved in a wonderful location,” says Richard.

Tironui (Maori for ‘great view’ or ‘telescope’) was born with vines bought from Villa Maria in 2003. The first vintage of 200 bottles was produced in 2005.

Tironui’s label reflects this, with a stylised view of the Bay across to the cliffs of Cape Kidnappers, as seen from the vineyard.The vineyard carries three grape varieties positioned in specific locations on the site.

At the very top are a small number of Cabernet Sauvignon vines, above the driveway Merlot has been planted, while below the driveway Malbec, less commonly grown in New Zealand is to be found.“We were fortunate to get sound advice from Stu Devine who at the time was working with Villa Maria.

“The site has the potential to produce four to five thousand bottles of wine and on good years, we have achieved this” He and Jennifer are pleased with the quality of each vintage they have produced especially these past two or three seasons with their wines rated at the five star level by some of New Zealand’s leading wine critics.

As a boutique vineyard, the economies of scale found in large-scale operations will never be achieved.

“All our grapes are handpicked and are picked together and co-fermented We use French oak barrels and all of our wines are produced exclusively from grapes grown on the vineyard.

“This, along with the Malbec dominance, creates a significant point of difference for the vineyard,” Richard explains.

Tironui has been exported in small volumes to the U.K and Malta, but of more significance is a regular annual shipment to Cambodia for an exclusive customer in Phnom Phen.

Other bespoke overseas orders, such as to Australia are catered for, along with national sales and distribution through two or three major outlets and an on-line presence via www.tironuiestate.com. Tironui can also be found in a number of Hawke’s Bay Restaurants and further afield in restaurants such as Boulcott Street Bistro in Wellington, who have been a long-standing customer.

The amount of work on the vineyard itself is very much seasonal and Richard says this could not have been done without the invaluable work and support from both Grant Russell and Blake Herbison, who between them, keep a close eye on the vines and in Grant’s case, undertakes much of the hard work.

Once harvested the grapes are taken to Chris Harrison, who owns Beach House Wine and who carefully produces each year’s vintage.

While the reds take around 18 months until they are bottled, Tironui occasionally produces a Rosé, using the same varietal mix, but with a significant difference in process.

Here the grapes are lightly pressed, with the skins then being discarded, as opposed to being part of the fermentation process. A typical Rosé will normally take around six months to go from grape to barrel.

Richard advises that there are currently no plans for expansion, though there is currently some building work being undertaken on the vineyeard, which will open up some potentially exciting opportunities to showcase the vineyard and its stunning views.

“If we were to expand, or buy grapes from other producers, it would effectively dilute our story. “We’re proud to be a single vineyard, producing top quality wine. with a number of differentiating factors. 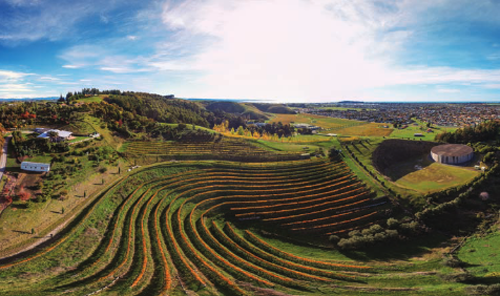 This creates a story and potentially a conversation when a bottle of Tironui is opened and enjoyed.”