The striking house is sited on an equally impressive highly elevated site with a 270 degree view to hills and mountains which are a backdrop to the expansive Waimea Plains, and the nearby Mataura River.

For the owner of T. M Brumby Builder, the house’s front elevation, designed with monopitch sections of varying heights and which includes high vertical louvres on a section of its north wall, is a special feature.

The effect is an elegant frontage which impresses and entertains the eye but seeks to draw one in to explore the house further. “It’s really well designed; the whole house has got a wow-factor,” Trevor says.

He is also impressed with the high standard of the plans provided. “Eliska is very switched-on with her detail; it’s all there.” Trevor was originally approached by the client who his company had worked for before and Eliska Lewis Architects was recommended by their friends.

While the house itself is striking, it is on an equally impressive highly elevated site with a 270 degree view to hills and mountains which are a backdrop to the expansive Waimea Plains, and the nearby Mataura River.

However, because the site was on a slope of about 45 degrees and its west end had to be reduced by about 3.4 metres, massive excavation supported by a vast amount of retaining walls was needed to create a stable building platform.

This work alone took two months. The four bedroom house is a total of 383 square metres, including a 32sqm loft with a bedroom and storage.

The main living and dining area features a polished concrete ﬂoor; part of which is recessed to allow the inclusion of carpet ﬂush with the ﬂoor level. The 5.4 metre roof height in this area creates a dramatic sense of volume and spaciousness while the abundant glazing draws in the light and amazing views.

Outdoor living is catered for by a timber deck coming off the living area in addition to a sheltered courtyard formed between two of the building sections.

Eliska Lewis says the site, which is on Gore’s northern town boundary, was “really complex”. 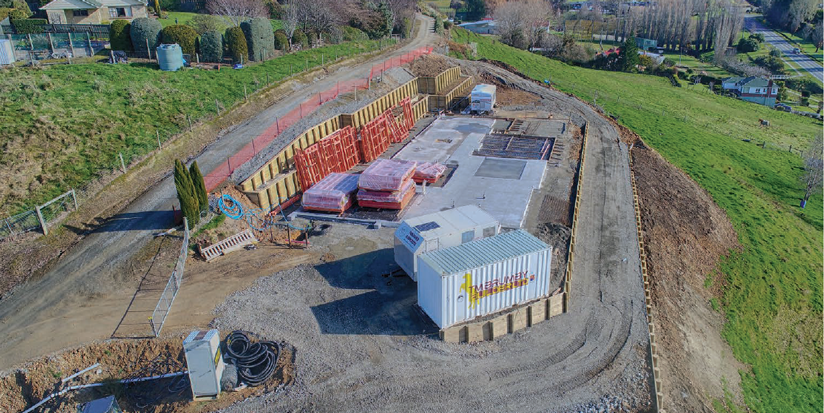 She says while it was initially hard to imagine being able to create a suitable building platform on it, 3D modelling was completed with input from the client’s son who is a surveyor who provided levels for the building platform. While it is a town site, the rural views create the feeling of a rural property, Eliska says.

“It’s got the perfect combination.”Consequently the design, although reasonably contemporary, references a rural vernacular, which included metal cladding on the exterior. “That helped drive the shape and form of the house.”

Because the client has a large family, indoor and outdoor space with ﬂexibility was an important consideration, along with the need for low maintenance and capturing the rural vista.

“Once you work through the brief with the client it’s almost like the house takes form itself. It’s like a puzzle that you try and ﬁ t together.”