The historic elements in the original church design were retained, revived or restored in the conversion and restoration. Below, the church’s three outstanding leadlight windows were restored and double glazed.

Converting an iconic and historic Petone church into three outstanding apartments was for Matt Spicer a once in a lifetime opportunity.

Matt founded his building company SpiceBuild in 2010 and concentrates for the most part on residential conversions and new builds and light commercial work.

When the opportunity came to undertake an ambitious rebuild of the 136 year old Wesley Church at 42 Nelson Street Matt jumped at the chance.

“Builds like this one don’t come along very often. Tony Cook bought the disused church in 2016.

“As an owner of a joinery business he could value the historic detailing and the potential the church offered to become a unique and beautifully crafted set of apartments,” says Matt.

The attention to detail and standard of work is second to none.”

When Business Central spoke with Matt early May, work had finished on the former Wesleyan Church and the three apartments were on the market.

Tony insisted that, as much as possible, the historic elements in the original church design were retained, revived or restored.

He hopes the restoration and conversion of the church into bespoke high-end residences will spur other apartment developers to look at retaining and transforming original buildings.

Matt and Tony collaborated through ongoing discussion during the build as to what features and materials could be salvaged and where this was not possible, an extremely sympathetic approach in terms of new material choices meant old and new technologies sat comfortably next to each other.

The church’s three outstanding leadlight windows were restored and double glazed and each apartment has its own unique feature.

Advice received from Heritage New Zealand was taken up in terms of the choice of colour outside in sympathy with the age of the church and in upgrading and double-glazing the gothic windows.

The largest of the three apartments named Nelson is situated at the rear of the church with extensive views overlooking Petone from two of its three upstairs bedrooms.The apartments range in total area from 183sqm (including 25sqm garaging with loft) to 229sqm.

“I can see there will be very strong interest from the market to live in a unique slice of Petone history,” says Matt.

He studied Industrial Design at Victoria University and from this experience his passion to get into construction grew, resulting in the decision to become a qualified builder.

Having completed the Wesley Church apartments transformation Matt says he and his team have plenty of work booked ahead including a number of renovations for leading Lower Hutt business Moore Design.

“We mainly concentrate on the Lower Hutt region and we’ve grown a close association with Moore Design.” 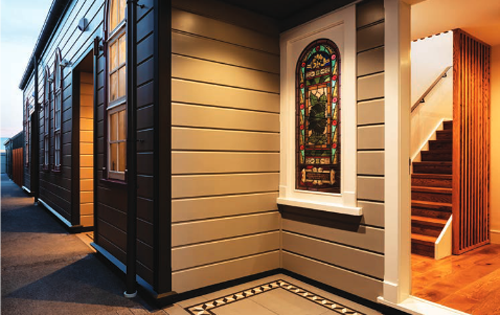 When Matt established SpiceBuild he didn’t have a clear plan or expectation to grow to the size the company has now, with a total team of 20 including apprentices on board.

“We operate in a very competitive building environment but have been fortunate to grow a strong reputation so I am very happy with our situation.”