It would be fair to say that at its simplest constructing a new water reservoir and associated infrastructures is like one giant LEGO build while at its most complex it is about juggling thousands of interfacing processes.Such is the life for Hamilton-based Spartan Construction’s on-site Project Manager, Richard Ogden at teh site of the new Ruakura Reservoir.

His role among many on the sprawling site at the back of Ruakura Research Station on the edge of the city, is to find workable solutions to any daily issues impacting progress while ensuring future planning has happened to have vital infrastructure components on site on time.

The scheduling of the arrival of vital technologies is a critical responsibility. “That’s one of the aspects of project management I most enjoy because no two projects or two days are alike,” Richard says.

“There’s a planned scheduled aspect and a reactive component to my role.”The project is just one of several Hamilton City Council is commissioning in the rapidly growing eastern quarter of the city and the $11.4million reservoir and pump house facilities have been designed to future-proof water reticulation needs for many years to come.

Hamilton City Council purchased sufficient land from Tainui to eventually build a second reservoir though Richard says that build is many years off.“The capacity we’re providing with the current new reservoir will meet demand for water for at least the next decade.”

The project got underway with ground settlement in April, piling thousands of tonnes of soil on the area where the reservoir would eventually be built. “This is a standard civil site-prep process with the weight of the soil eventually compacting down to ensure the facility to be built above is on stable level ground that won’t move.

“When you think about how vital it is to have the reservoir seismically secure in the event of ground movement this process is really essential. Interestingly enough it only took three weeks for the gauges to indicate we had solid compaction,” Richard explains.

From this the actual reservoir structure begins to be built, first by digging down two metres and filling with imported gravel, then pouring the 45 metre diameter concrete foundation.The reservoir is formed from 17 poured-concrete columns and 60 precast wall panels stitched together, completed with a precast concrete roof. 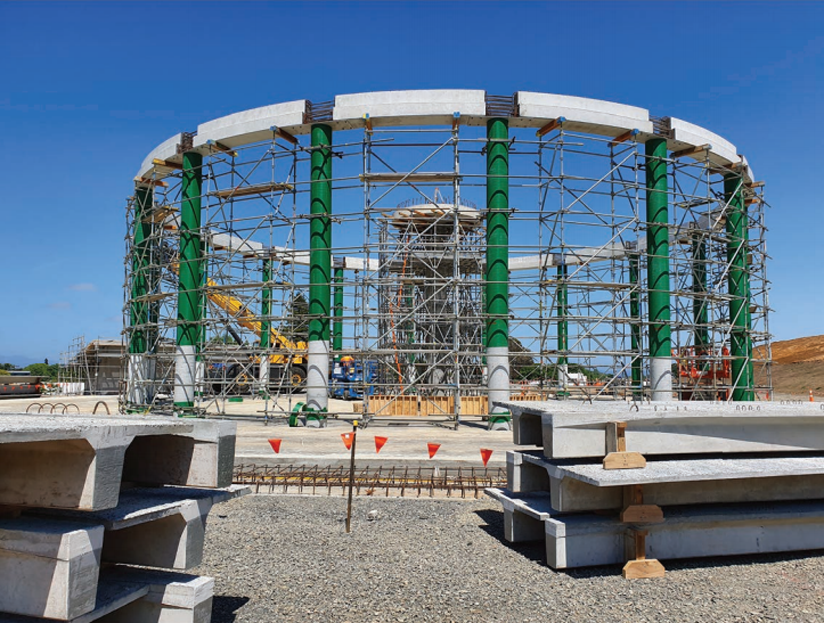 The reservoir is formed from 17 poured-concrete columns and 60 precast wall panels stitched together.

Sophisticated structural strengthening of the precast elements is achieved by tensioning the reinforcing steel inside using hydraulic jacks. In the case of vertical reinforcing strands this takes place during casting with the horizontal strands tensioned once the panels are in place.

Tensioning is necessary to ensure no further expansion or contraction of the final structure.In all, 25,000 cubic metres of land has been excavated, 10,000 tonnes gravel placed under the reservoir, 2,400 cubic metres will be used with 265 precast panels constructed.

When completed the reservoir positioned on raised land behind the research station will hold 12million litres of water, ready to supply smaller pump stations throughout Hamilton’s south-east quarter.While the reservoir’s impressive stature draws the eye, it’s actually the pump-house that commands the biggest financial resourcing.

Over $5m of the total budget is devoted to this large precast concrete box-like structure, which will house eight pumps .Like many specialised components of the reservoir project the pumps are being imported from overseas.

In fact elements have been sourced from all over the world and one of the responsibilities Richard had was to ensure the procurement and ordering of these key pieces of infrastructure happened in a time-frame that would support the project continuing to schedule.

“There’s a 20-week lead time to have the technologies shipped and delivered on site so in the case of the generator, from Ireland, German pumps and the large valves from the US these were ordered in March. Flow metres will be imported from Japan and the gantry crane from Germany.”

Richard says that despite the challenges of strong winds impacting on some activity, the schedule is going well with an expectation the plant will be operational by June this year. With a 45m diameter and at 9m high the reservoir has been designed to not impact any more visually on its surrounds than necessary.

Two valve chambers are in the process of being built, to cope with water flowing in and out of the reservoir. At any one time upward of 40 construction staff are spread over the site, with specialised services, such as electrical and welding sub-contracted in.

Tags:
Previous Article
New lease of life for modernist masterpiece
Next Article
Awards win a credit to all involved