With its first season drawing to a close next month, the complexity of the Southern Dairy Hub’s (SDH) multi-farm operation continues to be a big challenge, business manager Guy Michaels says.

SDH is at Wallacetown, about 15km north west of Invercargill, running four herds of up to 200 cows each, with one used as a benchmark herd aimed at demonstrating top commercial performance.

“It’s been very much a typical first year conversion with all the stresses and concerns that come with it, coupled with the fact that we had 80% of the farm re-grassed late in the previous autumn, so we did not want to damage that good work and investment in the spring.”

Despite last spring being “about as good as you could get in Southland”, pastures were initially extremely wet, a situation which Guy attributes partly to the newly established pastures and partly to the hub’s heavier soil types.

“It took six months for the pastures and soils to settle.” Between late spring and Christmas, rainfall was below the long-term average, and during summer the region fell into a notified drought.

When rain eventually arrived in February it absolutely transformed the hub’s pastures with the ryegrass tillering out and clover bulking up. A key benefit of the increased clover came from its ability to fix nitrogen in the soil.

Crops for wintering all the cows are within the 300 ha. The farm continues to milk three times in two days, a regime started during the summer drought to manage cow body condition score (BCS).

“This suits the farm team and has looked after cow condition which is stable at a 4.6 BCS average.” There are currently 95 cows at a BCS of 4 or less; two thirds of these animals have a BCS of 4.

“All the advice suggests that year one is very much a benchmark year. Conversions, as a rule, really don’t start to fire until year three onwards once the new pastures are established and the herd becomes accustomed to the management.”

Moving into the end of the season, the plan is to milk late into May and at the same time achieve the average pasture cover and BCS targets for the four different farmlets for next season.

Research at the site is focusing on farm systems comparisons that include different forages, supplementary feed and predicted environmental performance.

The other two farmlets will run 3.1 cows/ha, use a maximum of 200 units of N/ha/annum on pasture, targeting around 1,200 kg/MS/ha (450 kg/MS/cow) with a leaching loss of 40kg/N/ha or less. One of each lower and higher stocked farmlets will be wintered on kale, the others on fodder beet.

The team at SDH includes farm staff, and different research teams depending on the research questions being addressed, so there are multiple layers to its operation which creates complexity and challenges.

“Running four farmlets and milking four separate herds, the workload for every task is doubled with approximately 50 temporary fences used each week, for example.” 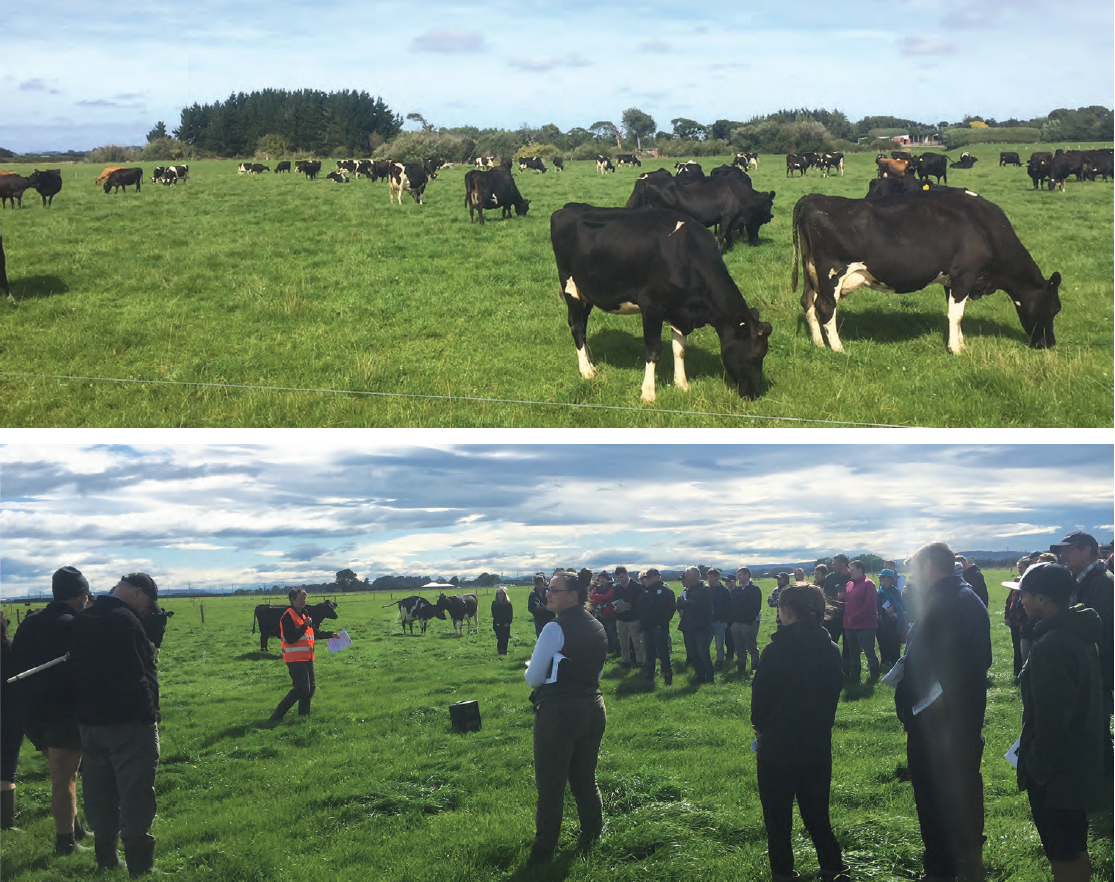 Part of the 700-cow herd (top) that is being milked on the 300ha effective SDH farm at Wallacetown. Field days (above) are popular at the multi-farm operation.

Because all cows must remain in their respective farmlets, normal practices in a commercial herd, such as separating lighter BCS cows from their herd-mates and feeding or treating them differently if needed, are not practical due to the number of herds this would generate. Consequently this requires other options to manage these normal operational issues.

The hub’s farm staff have made a huge contribution to its establishment and have been great to work with, Guy says.

“The interactions between the farm and science staff, in a farm with multiple layers of complexity, has laid the foundations for the future.” While there have been challenges, the opportunity to liaise closely with researchers and to glean from their expertise has been fantastic, he says.

“From a management perspective we really appreciate the effort that everybody’s put in for our stakeholders in our first year. As we move into the next phase we will be able to start reporting on the different farmlets on production, financial and environmental results.”

Tags:
Previous Article
A breakthrough in retirement living
Next Article
When disaster strikes, is there a plan?