Selwyn District Council Chief Executive David Ward says a lot of businesses are choosing to relocate to the district.

Selwyn’s sustained average annual population growth of nearly five per cent has established its place as New Zealand’s fastest growing district over the past 10 years. By 2029, the projection is for Selwyn’s population to grow from today’s 63,000 to more than 80,000.

Much of that growth will take place in Selwyn’s two biggest towns: Rolleston and Lincoln, whose populations are forecast to reach 27,000 and 12,000 respectively by 2029.

“One of the key aspects of this for us is that we also have quite a young population with an average age of only 37 years; 22 per cent of the people here are aged under 15,” says Council Chief Executive David Ward.

“The challenge for us as a council is to make sure that when those young people grow up, look for work and buy their first property they choose to do those things in Selwyn.”

The district began to boom before the Canterbury earthquakes of 2010/11, but there is little sign of a slowdown coming any time soon.

As well, there has been sustained growth in both tourism-related spending and the retail trade.Selwyn has excellent school options too, with Rolleston College having opened in 2017 along with two new primary schools (and a Christian school) since 2013.

“A lot of businesses are choosing to relocate to our district. The Christchurch Southern Motorway will be finished in 12 months and that will cut the non-peak travel time between Rolleston and Central Christchurch by up to 10 minutes. We’re also adjacent to a railway line and only 20 minutes from Christchurch International Airport.”

Fast growth inevitably brings with it pressure on existing services and facilities, but the Selwyn District Council is responding proactively to meet its community’s needs. The Selwyn Aquatic Centre is on track to double in size by late 2020 as a result of a $14 million extension project.

Learn to swim lessons have climbed from 700 a week in 2013 to 1950 and a waiting list this year. The extra capacity is much-needed to meet demand.Coming to Foster Park in time for the 2021 winter sport season is a new eight-court indoor sports facility ($21 million).

Staged development of this major sport and recreation park has been ongoing since 2014.Opposite the Council offices in Rolleston, construction of the district’s new Health Hub ($15 million) will be starting soon. 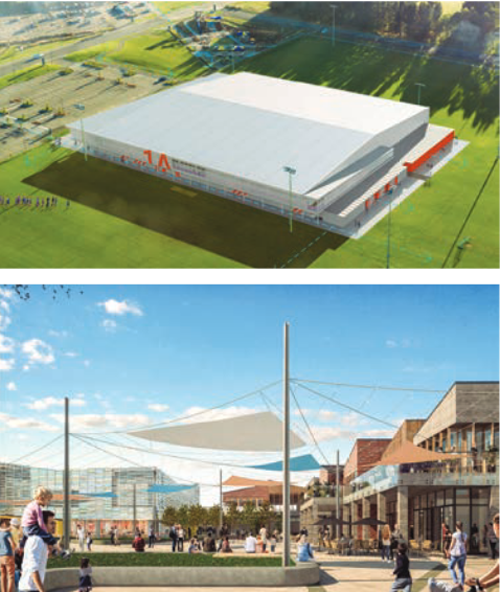 The development of Foster Park, the Selwyn Aquatic Centre and a new $22 million library, community and cultural facility – the first stage of a new town centre project – are creating a large number of new jobs and opportunities in Rolleston.

“Construction work on Te Ara Atea – Rolleston’s new $22 million library, community and cultural facility – is also underway. This is the first stage of a new town centre project for Rolleston. All of these projects will, in their own right, create a large number of new jobs and opportunities for shopping, recreation and personal services in Rolleston.”

In response to rising tourism growth and with support from the Government’s Tourism Infrastructure Fund, the Council has expanded and upgraded toilet facilities and dump stations for caravans throughout the district and has been working more closely with local tourism operators.

In July, Selwyn received the highest credit rating of any council in New Zealand (AA+), reflecting its commitment to good governance and financial stewardship.

Risingholme returns in all its splendour
Tom O'Leary Dec 16