The new $1.5million facility is the culmination of a huge level of energy and effort from within the Rotorua BMX fraternity.

After years of thoughtful planning the much anticipated opening of a BMX track built to international standards is about to happen.

The new $1.5million facility is the culmination of a huge level of energy and effort from within the Rotorua BMX fraternity, matched by massive community sponsorship and funding support.

Two of the many people who have steered the project to life, current Rotorua BMX president Aimee McGregor and former president Melanie Short, both agree all the hard work has paid off.

“We couldn’t have produced a track of this standard without community wide investment. When we applied and received grants of $500,000 each from Rotorua Energy Charitable Trust and the New Zealand Community Trust it felt like the stars had aligned and building the track became a reality,” says Melanie.

Then there was further funding received from Lotteries Commission, One Foundation, Grassroots Trust and the Lion Foundation which gave the project another big push.

“We always intended to build the very best track possible.

It’s positioning right next to the famous mountain-bike tracks on the main road into Rotorua is fantastic for the profile of the sport which has been historically strong in Rotorua,” adds Aimee.

She says that partners in the project, Red Stag Timber, Spark Business Bay of Plenty and design, engineering and planning company WSP were pivotal in the process of constructing the track, which boasts two starting ramps to cater for beginner through to elite athletes.

The site the track is located on has been leased from Rotorua Lake Council for a peppercorn rent and the Council also supported with necessary infrastructure to enable access to the site previously known as “the horse paddock”.

“They have built a stunning bridge which re-ally reflects the standard of the 400 metre track beyond,” says Aimee.

Designed by experienced BMX track designer Brett Barnes of DirtzTrack in Sydney, the track is full of huge challenges to test the skills of all levels. 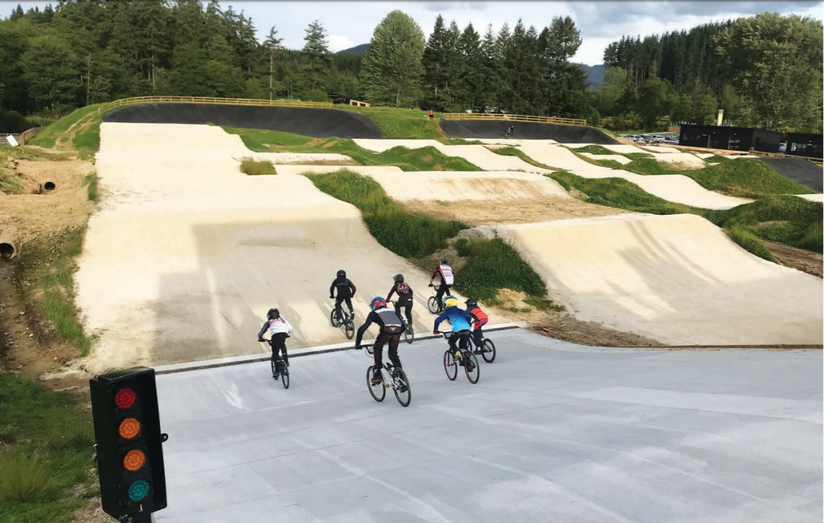 The civil construction was undertaken by Camp-bell Construction and the track shaping and final build by Velo Solutions’s Craig Pattle, himself an ex BMXer and Rotorua local.

Official opening of the track on 7 December will doubtless be a great celebration of what can be achieved when a dedicated group of volunteers hold tight to their vision and work in well together each taking up specific responsibilities.

And it is not only the new track that members of the club are celebrating.

When Business Central spoke with Aimee and Melanie early November they were looking forward to arrival on site of the club’s new base, transport-able purpose built clubrooms built by Transbuild.

For Aimee what is most exciting is the potential of this world class track to engage more young people in the fast growing sport.

“Rotorua is an event town and is increasingly recognised as New Zealand’s biking hub.

“This is something the whole community and council are very committed to and with the positioning of the track, named Te Papa o Te Kauri, within a precinct of other top class biking activities, it further reinforces this reality,” she says.

Above all the track has been designed to provide a fun-filled exhilarating experience and following the official opening there will be time for members to experiencing the curves, humps and hollows for themselves.

On Sunday December 8 the club will host a category 1 race for elite grade riders from throughout the country and overseas.

“Some are wanting to gain points for the Olympics so the standard will be tremendously high,” says Aimee.

So with the track officially open and available all year Aimee says the next happy challenge will be to undertake a membership drive and one way this will be achieved is through the Start Up to Race Programme, designed to get new riders involved in the dynamic sport.

The way the track has been landscaped allows for plenty of space for people to view the races.

For both Melanie and Aimee what has been so satisfying has been to see the thousands of hours by a small community of volunteer supporters result in a world-class facility.

“We will start to see major events held on the track and this can only be good for the future of the sport.

Te Papa o Te Kauri is located on the corner of SH5 and Waipa Mill Road.