Roebuck Construction was awarded silver in the Renovation over $1 million category at the 2018 national Registered Master Builders Awards for this stunning renovation project in New Plymouth.

Third generation New Plymouth building company Roebuck Construction has drawn on a long family history of quality craftsmanship to evolve into a multiple award winning business which is regularly delivering some of our nation’s top residential construction.

Managing director Ant Roebuck is now running the building business as his father did in 1979, and his grandfather back in 1946.

This was the same year Roebuck Construction entered the Taranaki Master Builders Awards for the first time, and its entry took out the Gold Award and category win in the $600,000 to $1 million category.

That win took Roebuck Construction to the national awards.

Roebuck Construction has entered the awards every year since, taking out another Gold and category Award in 2017.2018’s entry, a technically challenging renovation project on a tight access hill site in New Plymouth, was awarded silver in the Renovation over $1 million category.

The 1970’s two-storey brick home needed more space for its growing family, who were also looking to modernise the look of their home.

Roebuck Construction added a small extension to the ground floor creating an extra bedroom and games room, and a large extension to the second floor, giving the family a new master bedroom and en suite, plus a large open plan living, dining, and kitchen space with a scullery going back into the original part of the home.

Part of the build’s technical aspect includes piles at the bottom connecting to structural timber beams which run diagonally all the way along the building, tying into structural steel beams at the top.

“That was quite technical to build. When we were setting up these piles in the early stages of the job, they had to be positioned perfectly in line and height so the timber beams connected to the piles lined up perfectly with the steel beams at the top.”

Roebuck Construction has recently completed the build of next year’s House of the Year competition entry, a new home at The Paddocks Lifestyle Development in the coastal town of Oakura.

Designed by Boon Team Architects, who also designed Roebuck Construction’s 2014 and 2017 winning entries, Ant says it has the look and feel of the type of house that can do really well in the awards. 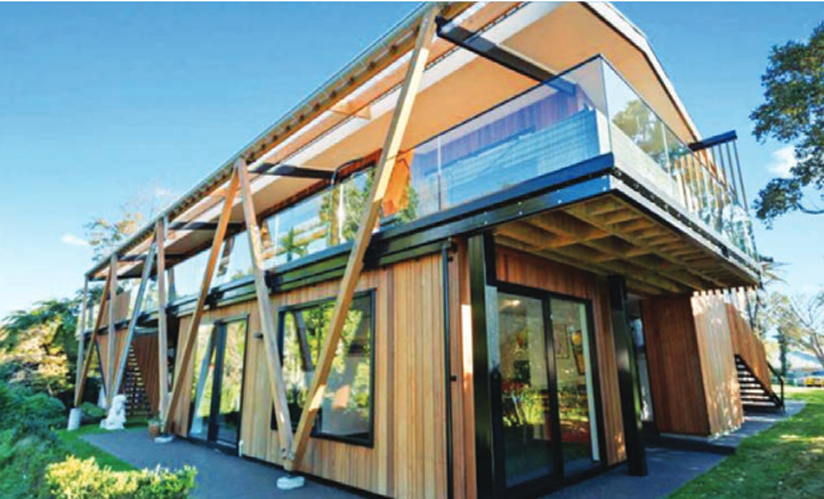 A point of difference for the project is its larch rainscreen cladding over black cement board.

“The larch has a 10mm gap between the boards, giving it a nice negative detail effect.”

The floor slab was poured in early September so the eight month build time is credit to Ant’s project management skills and the great team he has working for him.

“Having the same subbies for a number of years allows them to have a great understanding of the quality, craftsmanship, and delivery we expect.”

This has created some happy working relation-ships with his clients, which in turn has kept the work rolling in.