With a background in design and build and carrying a love of skateboarding Richard Smith has been responsible for designing many skateparks throughout the country.

Based in Laingholm Auckland, his company RICH Landscapes has established its niche designing high-spec skateparks along with public play precincts, residential, commercial, educational and public landscaping.

Currently he is working on an ambitious development at Maidstone Park for the Upper Hutt City Council.

He’s been working on the design since late last year. This project was one of 16 on his books.

“At Maidstone Park I kind of got in before the playground people so had a blank canvas of space to work on. The skatepark will be around 1200qsm and a really great resource for the community to enjoy,” says Richard.

Growing up as a skateboarder and now father has given Richard a unique perspective on how the thinking and process behind skateboard and playground design has evolved.

“It is so much better now in terms of consultation with stakeholders through the planning phase, so that what is ultimately built provides a recreational space that really ticks all the boxes.”

“Back in the late 90’s and early 2000’s skate-board facilities used to be tucked away from the mainstream playground spaces, on the fringe of a public space.

“ Today, councils and others responsible for playground and recreational provision are keen to see these spaces designed inclusively with other facilities meeting the needs of a wide range of users,” he says.

“There’s certainly a much better approach to collaborative thinking and consultation and when we design a skatepark or playground we take great care to not finalise the design until stakeholders have a moment to input.”

And what Richard and partner Jessica most enjoy is delivering the best results for the community, delivering on accommodating for the needs of everyone and remaining within budget.

Modern technologies have also come to the fore in the design phase with the use of 3D scanning.

It means that Richard can present their environments in a visually dynamic way.

They collect onsite information including levels and colours and reinterpret these into 3D models usable within Sketchup Pro.

“This is great as we can present the site as true as possible including the trees and vegetation that exists.

Richard was also looking forward to the opening of an extension and upgrade of a skatepark in Marton. 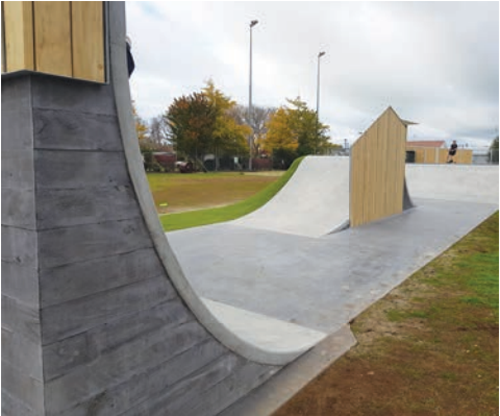 The idea was first brought to council’s attention by Roman Strong, an enthusiastic skater back in 2013.

“It’s going to be a really challenging and enjoyable park for skaters to use and will be a big boost for the town in terms of facilities for its youth.”

Beyond skatepark designing Richard has received accolades for his work at the Ellerslie Flower Show and recognition by the New Zealand Institute of Landscape Architects.