Tane says the process of designing the Tamahere home went very well, partly because he knew the owners, Ben and Nicky Lee of The Parsons Project, having worked with them on numerous properties since their return from London in 2012. This gained an understanding as to what was important to them to have expressed in their living environment.

“They were looking for a large family home which had to have a relaxed feel to it. The design process was reasonably quick and came into form within about six weeks from first concept drawings,” says Tane.

He says that key to producing a design that works is to understand the client well. In this case the couple also wanted the home to have a sculptural quality to it, with quite a fine line.

Called the Shibui House, the design intent was to create a simple and subtle form. The decision was made quite early on to enter the home in this year’s competition.

“When we purchased this mature section, it was important for us that the home and accompanying structures embedded peacefully in amongst the trees and achieved a sculptural aesthetic from the exposed aspects. With a variety of mature trees on the section, we wanted to pivot the three structures around an impressive Elm.

Ben says working with Tane is always exciting as they hope to achieve a lasting impact on the landscape in the Waikato region,” says Ben. “The word “Shibui” is Japanese and describes a style which expresses unobtrusive beauty and I think we successfully achieved this.”

There is a detached timber–shingled ancillary building which leads to the two main pavilions of timber siding. Interior utility and service areas are hidden or recessed with access via secondary pas-sages, just a few of the subtle aspects of its simple sculptural aesthetic.

Tane describes the design process as quite organic and appropriate for its final form, with the home’s footprint design shrinking and growing through the concept stage as its spaces settled into relationship with each other. 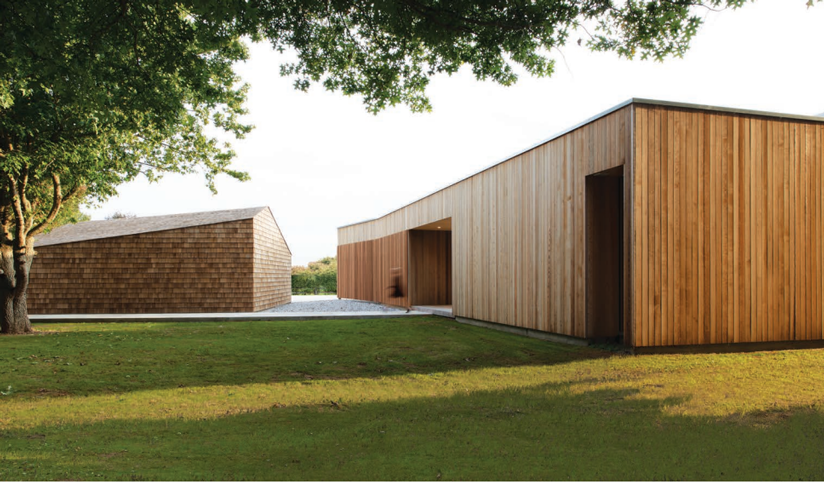 The Shibui House – the design intent was to create a simple and subtle form.

“The size was something we always moved around a little bit, making sure we weren’t wasting space. In an organic way a lot of the interiors actually got developed while the home was being built.”Inside, the colours chosen allowed the home to feel light and open with subtle shades of pink.

“We were hoping, in layering the materials as we did, that not one particular feature would jump out and overpower the senses. “This is the aspect of the design that I think most reflects the meanings underpinning the term Shibui.”

“Generally I take care of the design approach and then the guys are seeing the projects through. We’re pretty happy with where we are at, focussing on quality not quantity,” says Tane.

When asked about the reality of building homes today Tane says the overly regulated sector delivers challenges and that overall he’s not convinced that for the majority of people the building environment has improved.

“I’m fortunate to work with clients often who have the land and financial means to allow for a creative design process to unfold.” He has also observed a shift in thinking toward designing and selection of materials that reflect sustainable principles.

“My clients care about all the elements that go into creating their living environment including how the home is settled on the land in a way that both the home and the land work in symmetry with each other.”