Brothers forging ahead in Cambridge

Four of the six homes have the same fl oorplan with three bedrooms, two bathrooms and 148sqm.

Two brothers are forging their own residential development company, Progressive Property, in what is one of New Zealand’s fastest growing centres – Cambridge, nestled in the heart of the Waikato.

It’s a town people are drawn to for many reasons, with facilities such as the Avantidrome cycling centre, it’s rural aspect and links to equine activity and like many provincial centres Cambridge has a whole mixed-bag of people living in the town.

Progressive Property was founded in 2016 by Yann Wernli with brother Mario teaming up shortly after.“Yann had always had an interest in the local residential market with an early focus on providing affordable housing opportunities in Cambridge,” says Mario.

The brothers are developing two subdivisions, one in Cambridge, the other, over the bridge in Leamington. They count themselves as fortunate to have acquired these pockets of land in a town where sections are at a premium.

In Leamington, their development of six turnkey townhouses known as Shakespeare & Arnold has gained plenty of interest from the market.

Mario says he isn’t surprised by this, given the appeal of living in a low maintenance home which owners can literally ‘lock up and leave’. “These town-houses have been competitively priced at $700,000 plus and come packed with great quality fixtures.”

Four of the six homes have the same floorplan with three bedrooms, two bathrooms and 148sqm. There’s a clear separation from the sleeping spaces and the open plan living dining and with sliders leading out to a private outdoor area Mario says the very best use has been made of the floor-plan.

Two other town-houses, each four bedroom and at 174sqm and 164sqm will complete the settlement.The history of the site is compelling and extends back to when the NZ Air Force officers were gifted land in the Leamington area.

Originally it was home to a 1920’s villa which was relocated when Progressive Property purchased the site.Five of the six townhouses are accessed from Arnold Street and one of these, a four bedroom home was designed around a protected Totara tree. 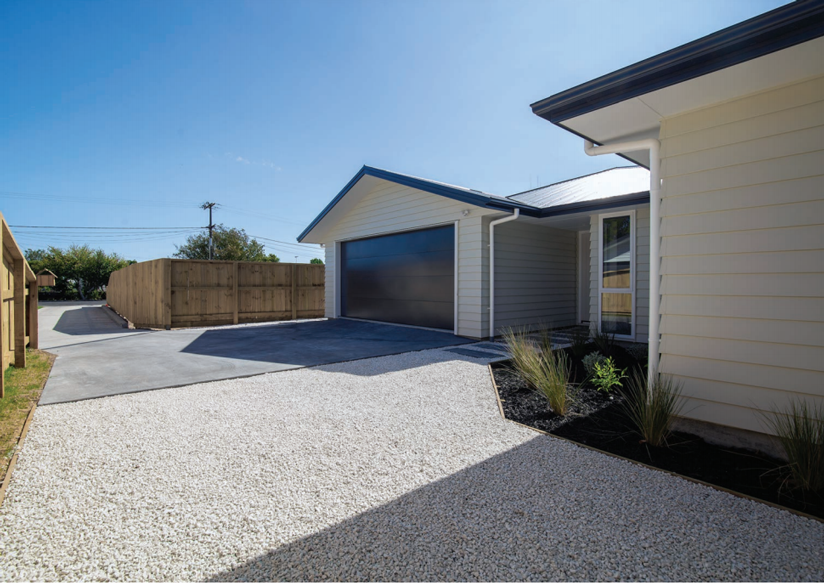 In Leamington their development of six turnkey townhouses known as Shakespeare & Arnold has gained interest from the market.

Inside, the kitchens will feature Bosch appliances and the largest of the homes, Lot 4, will come packed with additional design features such as polished concrete floors in the lounge and kitchen along with underfloor heating in the bathrooms.

“We’re really targeting those who have progressed to wanting an easy care home and may also own a rental property or for those at the stage in their lives where down-sizing into something comfortable and easy to look after makes sense.”

Lot 4, the largest of the two four bedroom homes will feature Redwood cladding and mono-pitched rooflines. The master suite has been carefully positioned as a private retreat. “We think, given their layout and visual appeal and their realistic pricing, there will be keen interest in purchasing.

“This has been a very enjoyable development and we think it will definitely add to the communal vibe of the neighbourhood.”One of the reasons Progressive Property is thriving is the skills of the two brothers.

Yann takes a very logical and action orientated approach to projects with his background in drainage and earth-works leading their initiatives.Mario has a work history in communication and sales and enjoys the details and design involved in each project.

Their diverse skill sets complement one another and the two brothers are looking forward to bringing more quality developments to the market in the near future. And with eleven apartments coming to the market later this year the future looks bright.