Dunedin’s booming cruise ship industry has grown by 35% from the 2017/2018 season, with 119 ships expected to grace Port Chalmers this season.

Port Otago cruise manager Carolyn Bennett says, this season the ships will bring more than 230,000 visitors – nearly double Dunedin’s population – with the peak of the season being January through March.

Last season the estimated economic contribution of cruise ships visiting New Zealand was $491 million; this is expected to be significantly higher this season. Carolyn has been in her role since last October.

She says the proactive involvement of businesses, tourist organisations and the community has been key to the success of the cruise ship visits to Port Chalmers.

“The cruise manager role was created to look at the commercial side of the cruise ship visits, to en-sure we are supporting all aspects of the business, not just operationally,” Carolyn says.

As a result of the increasing popularity of cruising worldwide, there were 120 ships booked for the 2019/2020 season.

Port Otago works mainly with New Zealand maritime agent ISS-McKay to manage the visits and to ensure local infrastructure can cope with the large volume of people, up to 7000 in one day if two ships are in port.“We work across the board to ensure that we can service a ship.

From a berth plan point of view, we are a working port, so we work with the agent to ensure we have everything the ship requires.”

Some of the world’s largest cruise ships visit the port, including Ovation of the Seas, which can carry close to 5000 passengers and 1500 crew. 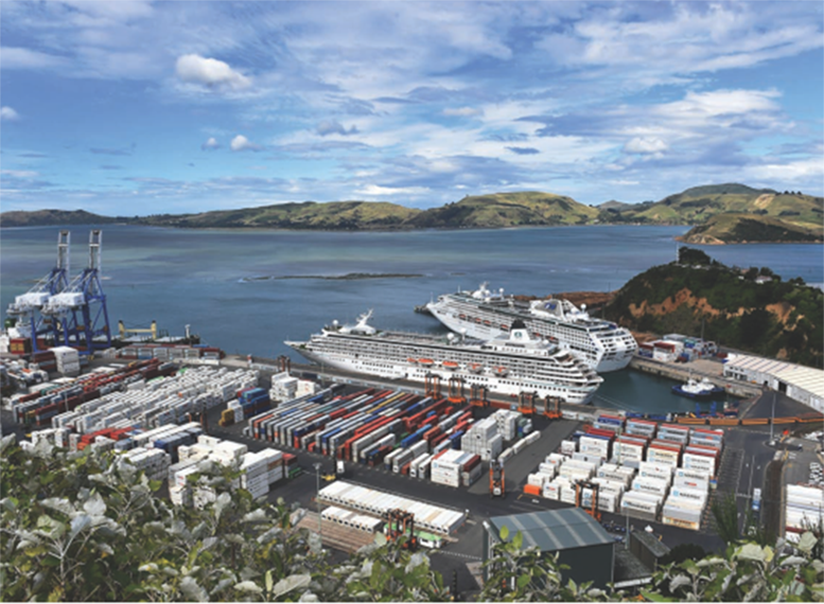 Cruise ships brought more than 230,000 visitors to Dunedin in the 2108/19 season, nearly double the city’s population.

Once on land, passengers can select a wide range of activities and tours.

Fortunately, the Taeiri Gorge train can run from Port Chalmers, but transporting the balance of passengers to other areas is a major logistical challenge requiring up to 80 buses. Because of this, Port Otago liaises closely with Police and the New Zealand Transport Agency.

Passengers can either book a tour on board, get a shuttle or taxi into Dunedin for independent time, book a tour privately by internet, or book at the port terminal’s i-Site on arrival.

“We’ve got a lot of attractions very close. There’s something for everybody.”

This year, for the first time Port Otago has invested in its own cruise security team of 28 local people. “That’s been a huge change for us.

Having an in-house team has allowed us to improve our customer service and ensure passengers have a really good visit while here in Dunedin and Port Chalmers.”

Carolyn says that, as cruise ships get bigger, there will be more pressure points on infrastructure. “But people have adapted well, including in dealing with the challenge of last minute ship cancellations due to bad weather.”

Businesses have also “cottoned-on” to promotions aimed at cruise ship passengers. “The Port Chalmers community even puts on a local market every time we have two ships in as an opportunity to sell gifts to them.”