The front half of the showhome has a large open plan living area dining, kitchen, scullery, and master bedroom, all featuring painted walls with softly contrasting beams across high sarked ceilings.

After more than 30 years of building Lockwood homes in the Central Plateau region, Peter Richards wanted to create something different with his latest showhome, something that would allow him to capture that portion of the market that didn’t realise what could be achieved with a Lockwood home.

“I wanted to show people what we can do with a Lockwood, because there are sales we lose when people don’t like the wood,” he says.

“It’s given us a whole new lease of life, and I’m sure it’s going to generate a whole lot of new interest and a whole lot of new sales,” Peter says. “The people coming through have been blown away about all the different things they didn’t realise Lockwood could do.”

Peter says Lockwood homes have traditionally either used polyurethane throughout the home or been blonded.

At the new showhome, with the advice of interior designer Nadine Sobeh, the rear half of the house, with two bedrooms, separate laundry, and main bathroom has been blonded, while the front half, with large open plan living, dining, kitchen, scullery, and master bedroom hase painted walls with softly contrasting beams across high sarked ceilings and clerestories, and numerous feature walls.

The kitchen is upmarket, with Silestone quartz surface benchtops, which is also used on the splashback, the sides of the walls, and above the cupboards.

In the en suite and main bathroom, two different themes have been created through use of contrasting tiles and high end fixtures and fittings.

Floor to ceiling windows and a freestanding stone bath create a relaxing sanctuary overlooking a private garden in the en suite. Outside, a floating walkway crosses the gardens to a bright orange front door.

The corner profiles of the home and the joinery were done in Textura Black, which creates a perfect combination with the softer cladding and vibrant entrance.

Lockwood is Peter Richards Builders’ flagship brand. For more than 30 years the company has been involved in many different projects, from lifts at Turoa Skifields, farm buildings, renovations and additions, large commercial buildings, and homes of real distinction. 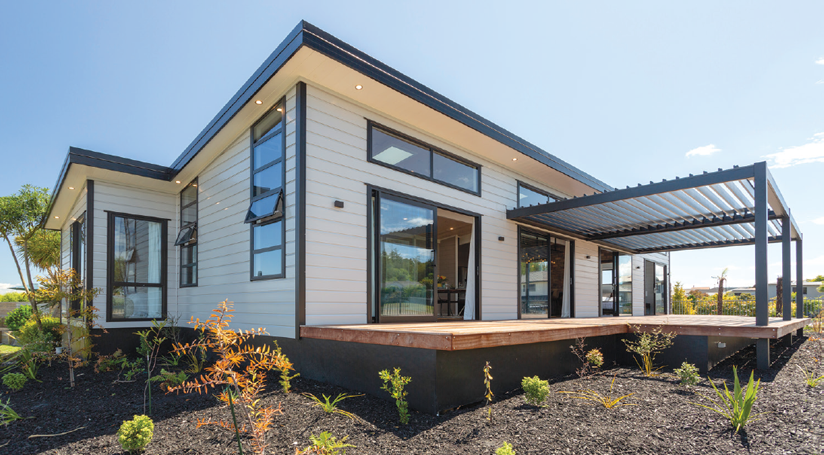 Growing up in Taupo, Peter has a passion for the area and he understands the challenges of building there. His team of project managers, craftsmen, carpenters, and administration staff are an integral part of the company’s commitment to its clients.

Being a stickler for detail, Peter has built a team of very experienced, local subcontractors, who deliver the highest standard of work.

They are renowned for going that extra mile, and Peter has developed a strong culture within his business of customer service.

“Many of our customers live away from the area and some are overseas, so they love the peace of mind they get when they build with our company,” Peter says. “We keep our clients up to date with regular weekly emails and photos of the building in progress.”