Commercial opportunities on the rise

Paul Kirby Builders has created a reputation for excellence in architecturally designed houses and high-end renovations.

Paul Kirby Builders is making inroads into the commercial sector in Dunedin, a trend the company’s owner expects to continue.Paul Kirby established the business in 2012 after working for an Auckland company as a leading hand on the construction of Forsyth Barr Stadium.

Before that Paul, who has 15 years’ experience in the trade and is Irish by birth, gained valuable experience in Ireland and Australia, managing projects in which he was responsible for overseeing up to 40 workers.

Carpentry and owning a business was something Paul knew he would do from a young age. He married his wife Soraya, who helps with the administration of the business, in 2016.

After starting in Dunedin doing smaller jobs, Paul Kirby Builders now has a staff of 12 builders and Paul is committed to employing apprentices who make up half this number. Despite the growth, Paul is careful to employ good staff and has developed a good team.

His willingness to take on apprentices is driven by the need for more builders in the industry as well as providing the opportunity to train them to the standards he requires to be established in his business.

The company has created a reputation for excellence in architecturally designed houses and high-end renovations, but Paul sees significant opportunities opening up in the commercial sector due to a contractor vacuum that will be created by upcoming projects which include the massive Dunedin Hospital rebuild.

An example of this commercial work is the major renovation of a two-level building in a prime central city location in Cumberland Street next to ASB House. The renovated building will be only about 20 meters from Dunedin’s new hospital when it is built.

Built possibly in the late 1800’s and rebuilt in 1952, it comprised retail space on the ground level and offices on the first floor before the latest makeover.

“We are putting an extra floor on top with 10 new high-end apartments. That’s what a lot of people are looking at doing now with these buildings.”

The addition of the second floor along with earthquake strengthening necessitates the addition of structural steel on the building’s exterior from which large I-beams are run to support each storey. 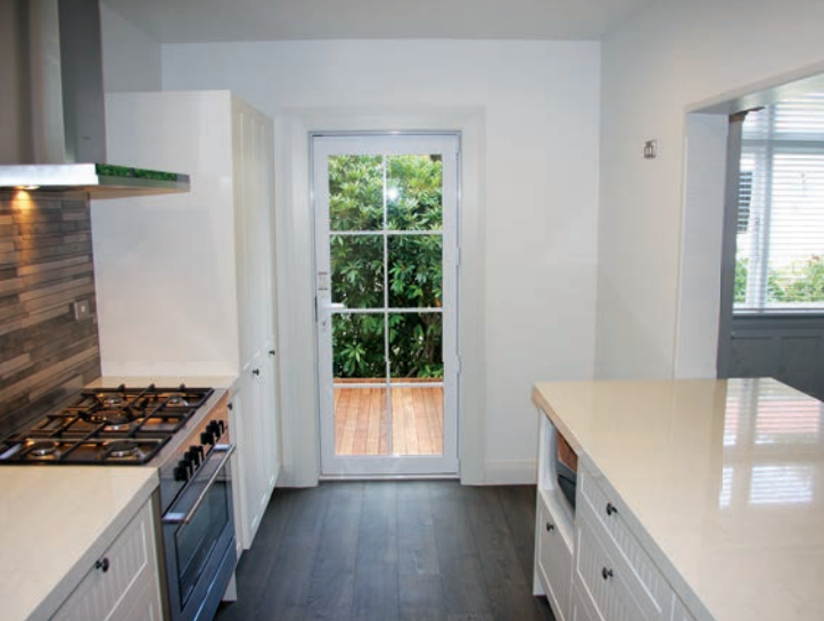 The quality of the project is reflected in the architectural design of the apartments which include mezzanine floors, glass stairs and glass balustrades.

The ground floor will also have a mezzanine added while the first floor will allow for about 12 to 15 office spaces.Started late June, the project is expected to take about nine months to complete.