Dredging is a big part of Pacific 7’s business and the company has assisted with the removal of sediments and debris from the bottom of lakes, rivers, harbours and other water bodies around the country.

In just three years Pacific 7 has gone from a one man band to employing 25 staff and growing.

The Tauranga-based business is an engineering and contracting company specialising in both land and sea operations.

Managing director Sean Kelly says it is the experience of his team that has seen the company go from strength to strength.

He also operated his own workboat business for a number of years before starting Pacific 7 in 2016.

Dredging is a big part of Pacific 7’s business and the company has assisted with the removal of sediments and debris from the bottom of lakes, rivers, harbours and other water bodies around the country.

Sean says the services is a routine necessity in waterways because of sedimentation — the natural process of sand and silt washing downstream gradually fills channels and harbours.

Dredging is often focused on maintaining or increasing the depth of navigation channels, anchorages, or berthing areas to ensure the safe passage of boats and ships.

“Vessels require a certain amount of water in order to float and not touch the bottom. This water depth continues to increase over time as larger and larger ships are deployed. Because of our busy ports here in Tauranga and throughout New Zealand, dredging plays a vital role in the nation’s economy,” explains Sean.

The company offers specialist equipment to get the job done quickly and efficiently including a 3D GPS on the excavator.

All of the dredging plant is mobile due to the Pacific 7 barges being sectional and transportable by road or sea meaning that they can get into places where larger barges cannot navigate.

Pacific 7 also has its own maintenance crew meaning the equipment is kept to a high standard, reducing opportunities for breakdowns.

It also means any unforeseen problems can be easily and quickly fixed allowing the team to get on with the job efficiently.

A recent dredging project completed by the team was for the Kaituna River re-diversion. The project saw the Pacific 7 team remove around 25,000 cubic metres of material.

Careful planning allowed Pacific 7 to get the barge in and out of the difficult location.

“This project really demonstrates the expertise of our team, our great equipment and our ability to work in with other contractors to get the job done on time.”

Sean says that Pacific 7 operates with a focus on environmentally friendly business practices.

For example the fleet is moving towards electric vessels with one already in operation and another under construction. 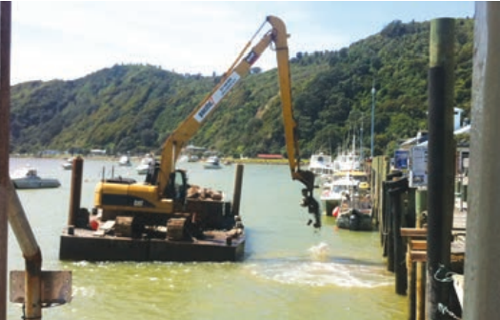 The aim is to reduce emissions and fossil fuel consumption.

Pacific 7 has its sights set on growth and is expanding its fleet, investing in new equipment and increasing engineering facilities to keep up with demand for services.