A tale of two Matts sees satisfaction all round

Osprey Boats has recently commissioned the biggest boat it’s ever built, the successful completion of which has widened the small Nelson business’ commercial sales market, according to production manager Matt Elliott.

“His business is fishing and he wanted the best purpose built vessel to suit his requirements so he could offer a bigger and better service,” Matt says.

Osprey Boats’ previous largest boat build was 9.2m, but the increased size wasn’t the challenge for the family-owned business which has been building safe, reliable, built to last, and practically unsinkable boats for more than 20 years. The challenge here, like all Osprey Boats projects, was building a boat that made the customer happy.

“Matt could tell us what he wanted, but then he’s got to trust us to build it,” Matt says. “The lines of communication were kept open throughout the build, which helps us to attend to issues quicker and also gives the customer a heightened sense of involvement.

“He knew exactly where we were and what was happening at each stage, and we worked together to get the boat as good as it could be.”Matt Dobson has been fishing in the Wellington area for 25 years.

This, combined with his ongoing experience in the charter industry means no detail was overlooked in the design and build of his new boat.

Osprey Boats allowed him to fully customise his boat, which his experience has found larger boat companies lacking. “There was a bit of leeway with how I set up the seating and the cabin,” Matt Dobson says.

“I had my cabin lifted up a bit and made a bit bigger so I could sleep in it. Being able to fully customise things is a huge advantage offered by Osprey Boats.”The larger size of this new boat allows Matt to grow his business by covering more distance and handling rougher conditions.

The Yamaha Helm Master is a fully integrated boat control system which for one-man-band Black Pearl Fishing Charters, is like having another set of hands on board. “I can push a button and it will hold me in one spot, so I can be out the back baiting hooks or taking fish off,” says Matt.

“For the docking side of things, the twin out-boards allow me to move the boat sideways. I just use the joystick to bring the boat parallel to the wharf instead of having to turn it around. It makes everything quicker and easier.”

Matt Dobson continued to update his Black Pearl Fishing Charters Facebook page during the build, and a steady stream of customers were ready and waiting to try out his new vessel once it was delivered ahead of schedule mid-October. Matt E says Matt D was pretty speechless when his new boat was delivered. 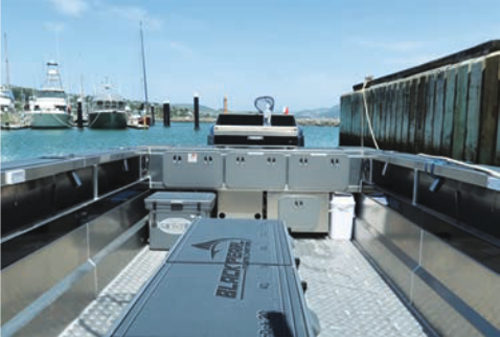 “Our biggest satisfaction is customer satisfaction. To see a customer react like that is perfect. “He was trying to find things wrong with it and he couldn’t.”