Nelson-Tasman’s largest indoor multi-purpose events venue, the Trafalgar Centre, is better than new after a major upgrade and earthquake strengthening.

Work on the park started in 2016 to tie in with the centre’s upgrade, commencing in September 2015.

Almost $13m was budgeted for the Trafalgar Centre work and an additional $3m for the redevelopment of Rutherford Park. Opus was appointed as project manager, with Gibbons Construction the lead contractor.

Built in the early 1970s, the Trafalgar Centre has long served as Nelson’s largest indoor venue for sports events, as well as cultural and entertainment events, trade shows and exhibitions.

Nelson City Council’s planned redesign of the centre, which was announced in 2005, began with the redevelopment of the centre’s southern end and main hall in 2009 and the west changing rooms in 2011.

Work to extend and redevelop the centre’s northern end was delayed after the centre was identified as an earthquake prone building and subsequently closed in December 2013.

In the following year, the council resolved to have strengthening work undertaken so as to enable the centre to be reopened in 2016.

Project managers Opus, along with contractors Gibbons Construction, used innovative ground stabilisation solutions to prepare the site: a deep soil mixer was used to create a network of groundstrengthening piles between the centre and nearby Saltwater Creek to minimise sideways movement in the event of any future earthquake.

Inside the centre itself, new structural steel beams and plates were installed to strengthen the building, with foundations also strengthened with steel reinforcing and boxing.

Opus worked closely with the project’s engineers, architects and contractors to come up with the best and most cost-effective solutions for the centre, using the latest construction technology. 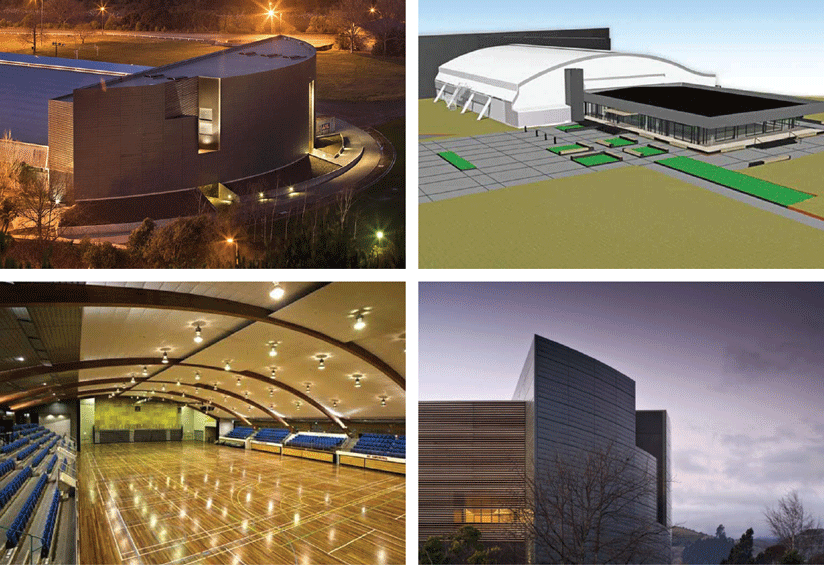 Nearly $13 million was budgeted for the upgrade of the Trafalgar Centre and $3 million for the redevelopment of Rutherford Park. Features include flexible new seating arrangements, spring timber flooring, a large modular concert stage, 200 carparks plus coach parking, new bathrooms and changing rooms, a full catering kitchen and modern audio/visual systems.

A major mi lestone for the work was the completion of strengthening work on the main stadium in April 2016, enabling the partial reopening of the centre to accommodate Nelson Giants’ basketball games even as work continued to finish the stadium and extend the centre’s northern end.

The centre was partially reopened again in September 2016 for a Silver Ferns game and a rock concert. On both occasions, considerable care was taken over health and safety with access restrictions in place for parts of the site.

Careful project management ensured that work on Rutherford Park to develop carparks, access and landscaping around the centre continued smoothly, alongside the centre’s upgrade.

A family fun day was held in April 2017 to celebrate completion of work on the Trafalgar Centre, with a ceremonial ribbon cut by Mayor Rachel Reese.