World-class technology is a key part of Open Country’s expansion of its Southland plant which will increase its production capacity by 50% next season.The plant at Awarua, just south of Invercargill, is currently undergoing a wide-ranging multi-million dollar expansion.

This will include the addition of the largest electrically powered boiler in NZ, a state of the art water recycling system to make the site self-sufficient on water and a new warehousing facility.

The plant has been operating two large spray dryers which produce whole milk powder; the expansion is adding a third dryer and will allow for a wider product mix, including skim milk powder and anhydrous milk fat (AMF) capability.

It also includes a new 14,000sqm warehousing and storage facility.The projects involve a collaboration between main contractor GEA, one of the largest global suppliers of process technology for the food industry, First Principle Constructors, of Lower Hutt and Calder Stewart Southland.

Despite the scale of the upgrade and the increased volume of product that will be manufactured, it is expected staff numbers will rise only slightly when the new facilities become operational, due to high automation, efficiencies and lean manufacturing processes.

Open Country chief executive Steve Koekemoer says the company has expanded significantly during the past decade and always been strongly environmentally focused.However, the ability to adopt new technologies is a balance between capital expenditure being economically viable and mitigating any present or future environmental impact.

“We’ve managed to find technologies that can give us both, that can actually ensure, from an expansion point-of-view, that we can add value to our farmers’ milk and at the same time we can adopt technology to ensure that it reduces any impact on the environment.”

The water recycling system means the Awarua plant will have the capability to reuse water evapo-rated from the milk and make the site self-sufficient throughout most of the year. 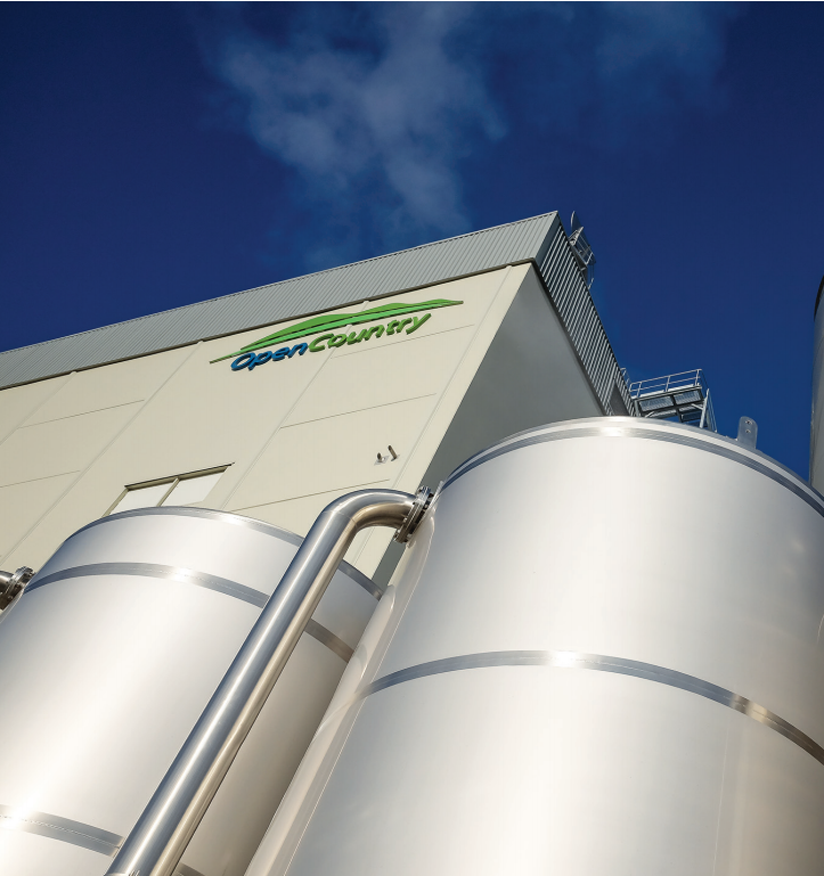 Open Country partnered with Powernet and Contact Energy to make the electrode boiler a reality.

“This equates to millions of litres of recovered water per day which the factory no longer requires to take from the Invercargill City Council infrastructure.”“Having this recycling plant not only saves water but also reduces the wastewater from the site due to it being recycled back to a drinking water standard.”Open Country Country also operates plants in the Waikato at Horotui and Waharoa and in Wanganui.Unlike the North Island plants, natural gas is not an option at Awarua, but Steve says there was a determination not to use a coal-fired boiler in the upgraded plant.

Consequently, Open Country’s long-term focus on sustainability has extended to utilising more renew-able hydro-electricity.“Even though we’ve been growing rapidly over the last five years, Open Country has not installed a single coal fired boiler during that period.”

This determination led to 12 months investigation into other options which resulted in the decision to install a 13-megawatt electrode boiler at Awarua, the largest in New Zealand and so far only one powering a milk powder dryer in NZ. The challenge for the Awarua plant was to find an economically viable solution which required assessing technology available in the United States, Europe and NZ.

Once a suitable option was found, Open Country partnered with Powernet and Contact Energy to make the electrode boiler a reality.The boiler uses electrodes submerged in water; electricity flows through the electrodes to make contact with the water, vaporising it into steam and creating renewable process heat.

“It is a very energy efficient way to create on-demand process heat at scale and can heat from cold in less than five minutes or from standby in about one minute. “Very little heat is lost in the process of heating the water, so electric boilers are almost 100% efficient.

“Not only does this reduce our reliance on coal as a source of energy, but reduces our greenhouse gas footprint and contaminants emitted to the air which is critical to our planet.”Central to the focus on efficiency has been the ethos of taking the right path versus the easy path, Steve says.

“Throughout our growth journey we are continuously looking at new technology in processing, while at the same time improving our environmental footprint to ensure that we remain world-class.“Our objective is to ensure we always provide the most economical and sustainable outcome.”