A unique community at Olive Estate

The Olive Estate Lifestyle Village is designed to feel open and spacious.

When development began at Olive Estate Lifestyle Village in Richmond five years ago, its owners the Nimmo family looked to create something quite different to any other retirement community in Nelson, and now they believe, in New Zealand.

“We wanted to create something which would encourage people to be as independent as they want to be, and that would feel just like you were moving through any other residential subdivision,” says managing director Kristin Nimmo.

“We wanted to create diversity, not only with the people coming into the village, but with the styles, shapes, and colours of the buildings as well.”

The Nimmos and their development company The Integrity Care Group found architect Robert Weir and landscape architect Luke Porter who they felt could achieve their vision, and started the process of designing the village.

“We wanted it to feel open and spacious, and to give residents some flexibility with the interior design and input into their gardens.”

The Integrity Care Group and its main construction contractors Scott Construction & Fulton Hogan first turned soil in September 2014 and has since built 105 units with another five due for completion in early July.

These comprise two-bedroom and three-bed-room villas, with single or double garages.

There are gable roofs and mono pitch roofs, and up to six different colour palettes on the exteriors of the buildings.

There are also some terraced houses with three bedrooms and single or double garaging.

All the living is on the ground floor as well as a full bedroom and bathroom, and two bedrooms and another bathroom upstairs.

One is home to the community garden and orchard where some residents work, and all residents are invited to extract fruit and vegetables at harvest time.

The Lake House also features two leased spaces, one operating as a hair and beauty salon and the other in line to become a café. 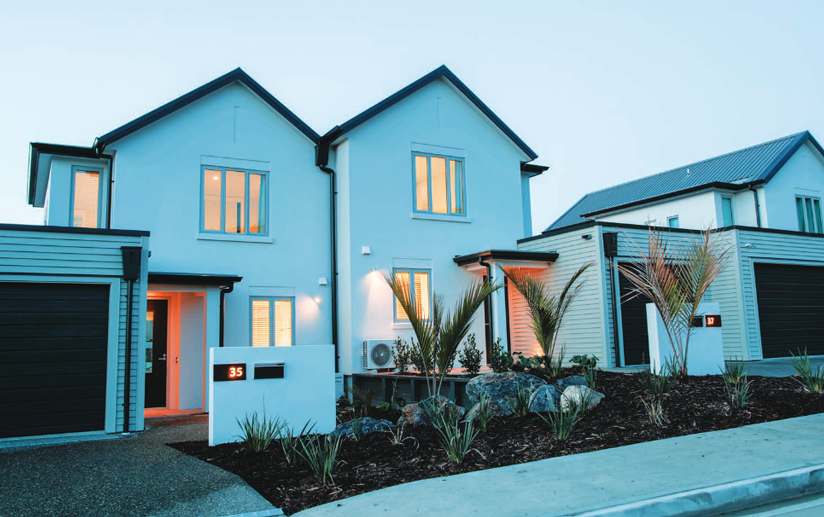 The Integrity Care Group and its main construction contractors Scott Construction & Fulton Hogan first turned soil at Olive Estate Lifestyle Village in September 2014 and has since built 105 units with another five due for completion in early July.

To facilitate meaningful connections between people of all ages, outside the café space is a children’s playground.

“It’s somewhere for the kids to run around and be boisterous, but also helps to generate conversation amongst the generations about what they’re doing.”

With another five years of construction before Olive Estate is complete, the next stage includes the build of four carriage houses, three storey units with tandem basement garage and workshop space, first floor living including a butler’s pantry, laundry, and bathroom, and two or three bedrooms on the third floor.

At 250sqm, the carriage houses are a premium product.

Kristin says all the homes at Olive Estate Lifestyle Village need to be something she would be happy to live in herself.

As a family owned business, the Nimmos are the ones interacting with their clients every day and they want to feel proud of what they are providing

The relationship between Scott Construction Nelson and Kristin, Tim, Vanessa and the Nimmo family at Olive Estate is more than just contractor and client, it is a cohesive team.

“The trust that has built over time enables open discussions to aid solutions, and involvement during design phases assists with construction methodology and ensuring the best systems are in place for the benefit of all.

“The non-corporate approach has created a positive culture for the whole site.”

Olive Estate’s core values have been a big part of the positive culture.

Justin says the philosophy of Olive Estate from the start was for local contractor involvement on a turnkey project.

This loyalty is not only to Scott Construction but also to its subcontractors which has contributed to a great team.

The Olive Estate Lifestyle village has grown from the first stage which started in September 2014, to now more than 110 villas and terrace houses omplete, with the carriage houses of stage 4C underway and a further 18 villas in stage 5A due to start in August.

Justin says one of the main challenges so far has been the proximity of constructing the Lakehouse while stage 4B was also under construction. “The logistics and methodology for access required careful consideration to ensure we were not building into a corner,” he says.

The construction of the Lakehouse involved high end finishes which required precise detailing to ensure features aligned, and extensive services also needed to be coordinated.

The Carriage houses now under construction are also a blend of commercial and residential type construction which require specific skill sets.

Apprentices have started and completed their apprenticeships and progressed into leading hand roles while working on Olive Estate.

“The repetitive nature of the construction combined with the high level of finish with the architecturally designs has provided a strong depth of quality carpenters.”

Scott Construction Nelson is a local contractor which prides itself on a non-confrontational approach.

“We have enjoyed the relationship for the past five years and we look forward to continued collaboration in the future.

“We are very proud of what has been achieved at Olive Estate Lifestyle Village.”

Tags:
Previous Article
Firm stamps its mark on Marlborough
Next Article
Warehouse project has its challenges