A new high-speed chair lift being installed at NZSki’s Coronet Peak ski field will move more people up the mountain faster this winter and open up new tourist opportunities in summer.

It will replace the Coronet Express, the peak’s primary four-seater lift commissioned more than 25 years ago.

Twenty-five years of history proved hard to compete with, when the public voted to retain the same name for the new lift, continuing into the new era also as the Coronet Express.

The age of the original Coronet Express, along with improvements in systems and technology during the past 25 years were factors in the decision to replace it, but is also the result of a focus on providing a broader range of tourist products over a longer period of the year.

The installation of the new Coronet Express is also driven by NZSki’s directors’ determination to see Coronet Peak’s service and facilities kept at a “very high” international standard, Nigel says.

“One of the steps in that direction is going towards a summer operation, as well as a better level of service during winter.”

The new Coronet Express will combine a six-seat chairlift with gondola cabins, ideal for sightseeing and summer operations, and will be crucial in creating new markets and a new tour-ism mix in which the scenery is the attraction, not just skiing.

“The [gondola] cabins will be suitable for the disabled and would be ideal for a family with young children. It’s not only just comfort, but also safety. It’s a real service standard.” 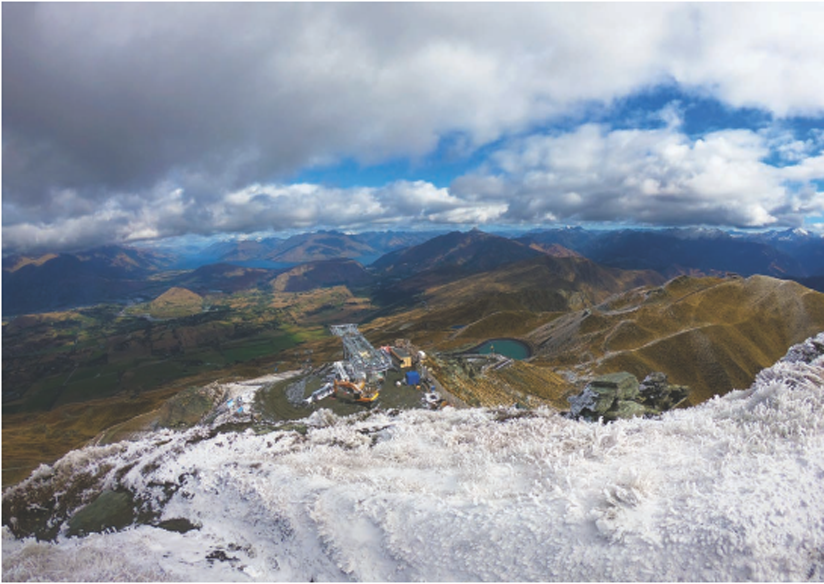 With summer lift access to the top of Coronet Peak, guests will be able to experience breath-taking views over Queenstown and the surrounding Wakatipu basin.

During winter, the new Coronet Express will operate predominantly as an express ski chairlift, whereas in summer the chairs will be dedicated to mountain-bikers and gondola cabins will be incorporated for sightseers.

With summer lift access to the top of Coronet Peak, guests will be able to experience breathtaking views over Queens town and the surrounding Wakatipu basin and beyond, while having the option of a range of activities.

Coronet Peak is planning to offer guided walks, sightseeing, and mountain biking on the upper peak for the 2019-20 summer season.

Coronet Peak also has the advantage of being easily accessible as it is just a 20 minute drive from downtown Queenstown on a fully sealed road.

“It will grow the potential capacity by about 20%,” says Nigel.

“It’s quite exciting. In this industry getting a new lift is like Christmas, but it doesn’t happen every year.”

A key operational feature of the new Coronet Express is that the upgrade will include a chair and cabin parking garage.

This will enable the chairs and cabins to be changed as needed, and then parked off-line to help alleviate the problem of ice forming on equipment overnight during winter.

The installation of the new Coronet Express is part of $35 million of upgrades at Coronet Peak and The Remarkables, and boosts NZSki’s investment in the two ski areas to $100 million since 2014.

Both the Coronet Peak and The Remarkables projects will minimise effects on the surrounding environment as part of NZSki’s sustainable slopes policy of preserving and enhancing the environment across its mountains.

“We aim to leave the mountains in better condition than if we didn’t operate here.”