New showhome has the ‘wow factor’

The exterior is a combination of Siberian larch and Linea weatherboard complemented by stone on the frontage of its garage.

Nick Bosanac Builders has been creating beautiful bespoke homes in Franklin for more than a decade, while making a tangible difference in the lives of its clients and community.

The company has been owned and run by Nick and Kylie Bosanac for 12 years with the support of their team which currently comprises 12 staff. The Bosanac’s are justifiably proud of their recently completed show home in Franklin’s Paerata Rise development.

Based around a modern American barn design, the generous 272sqm two-story open-plan home on a 560sqm site has greatly impressed viewers, Kylie says.

“It’s definitely a wow-factor home. Because it doesn’t look like your typical kiwi home it stands out even more, plus it’s one of the biggest and one of the tallest [in Paerata Rise].”

Despite making a bold statement, Kylie says one of the stand-out features of the Albert van Vliet designed house is the sense it creates of a welcoming family home in a well-connected community.

“Because we are a bespoke home designer our home was built specifically to display who we are as a company as well as as a couple; Nick is from Michigan and I have always had a natural inclination towards a more American style of design.”

The house’s exterior is a combination of Siberian larch and Linea weatherboard complemented by stone on the frontage of its garage.

Inside, the large kitchen has an equally spacious scullery. Both are well-equipped with
appliances, allowing for a busy family and guests to be easily catered for.

Elsewhere break-out spaces allow adults and children to separately spread themselves out, have some quiet time in the reading nook, or gather together in the media room, complete with barn doors.

Details in the house include half-height timber groove panels in the bathrooms and even decorative skirtings and architraves in the garage. 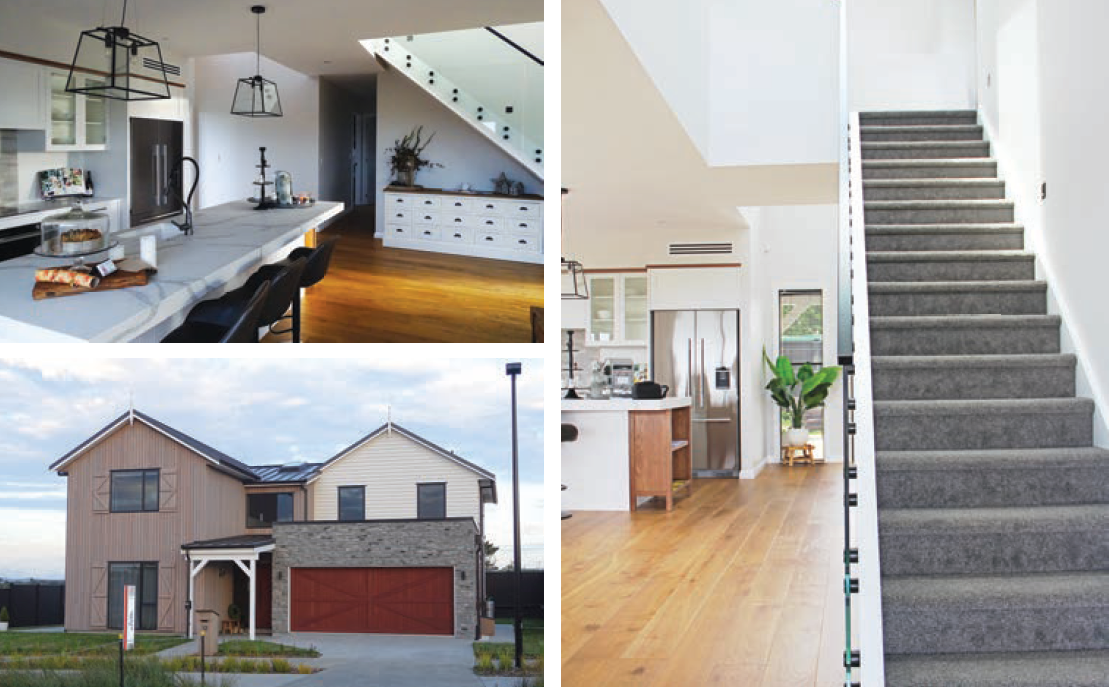 Based around a modern American barn design, the generous 272sqm two-story open-plan home is on a 560sqm site at Paerata Rise.

Touches like these reflect the tastes of both the Bosanac’s and their clients, while making a statement about the company’s approach to building, Kylie says. “The feedback’s been fantastic. Everybody walks in and says ‘wow, it’s so refreshing’.”

Nick Bosanac Builders will be building nine homes in stage one of the Paerata Rise development, which will eventually comprise 4,500 houses.

Paerata Rise is a new-build lifestyle community being developed between Karaka and Pukekohe, about 40 minutes from Central Auckland, by developers Wesley College Trust and Grafton Downs.

t is tipped to be a stylish new town that combines the best features of the local Franklin area with modern town planning to build an integrated, livable community.

As well as a range of housing options it will include 5ha of neighbourhood reserves, schools, a retail precinct and a transport hub, including a railway station.

Kylie says the vision of the development as a legacy project to fund Wesley College “for eternity” is a great match for the company’s own community ethos. Having grown up in the area, she also has a strong personal connection.

Tags:
Previous Article
Committed to success at Copper Crest
Next Article
Top quality on show at The Lakes