Meeting the need for emergency housing

The new complex will include 31 two bedroom apartments and an office facility.

Scott Taylor, Mike Greer Commercial national business development manager, says the business has a focus on giving back to the community and enabling people to have access to a safe, warm home so the project was a good fit and one they were keen to be involved in.

Monte Cecilia provides emergency support housing to families who are homeless or with a serious housing need for up to 12 weeks.

During this time, families participate in residential programmes while Monte Cecilia assists by ﬁnding long term social housing or an affordable rental which families can move into.

CEO of Monte Cecilia, Bernie Smith, says that the impact of homelessness on families/whanau, their communities and the prosperity of New Zealand is impossible to ignore.

“This new complex will provide warm, safe and secure homes for some of the most vulnerable families in our community and make a huge difference to both their immediate wellbeing, and their chances of having long-term housing security in the future.”

Designed by CBA Architecture, Scott says collaboration and working as a team will be the key to the success of the 42 apartment project.

The nine month project has a strict budget and Mike Greer Commercial has provided a ﬁxed price contract for the build.

Scott says that Mike Greer Commercial recognises that each project represents a signiﬁcant investment and so partners with clients to maximise value and to deliver the outcomes they desire.

He says the considerable purchasing power of Mike Greer Group was an important factor in being able to deliver real value for money to the client.

“This project really demonstrates the capabilities of Mike Greer Commercial and that we do what we say we will do. We have the ability to build a high quality product for a great price.” 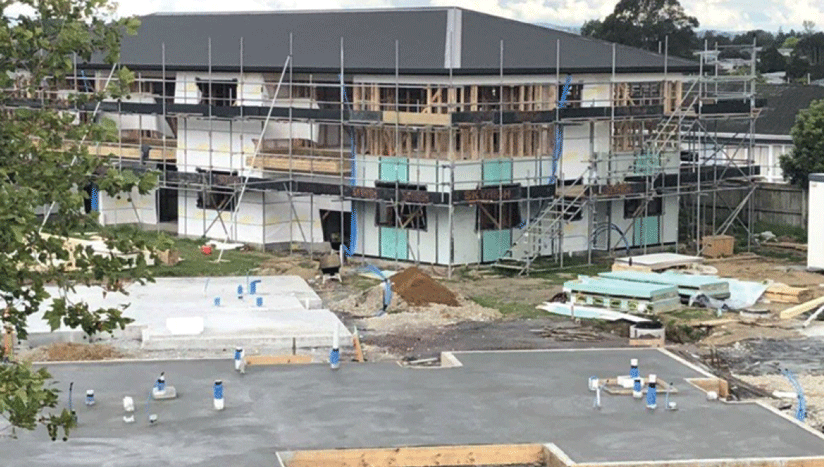 The MonteCecilia complex will provide emergency support housingto families who are homeless or with a serious housing need for up to 12 weeks.

Scott says Mike Greer Commercial was formed around three years ago after identifying a gap in the market for a trusted company with national reach specialising in high density projects.

Mike Greer Commercial works in conjunction with Mike Greer Homes branches to deliver throughout New Zealand and even has its own in-house architectural team offering an ability to deliver a project from sourcing land to completion.

“As part of the Mike Greer Group we have a track record of performance and quality. “Our mission is to deliver commercial projects on time, in full, on speciﬁ cation and on budget – every time,” explains Scott.

He says that what sets Mike Greer Commercial apart is the competitive edge that access to a nationwide Group affords, combined with the company’s ability to add value and enhance outcomes through its partnership approach and the potential for innovation, particularly in the area of panelised construction.

He says Mike Greer Commercial is currently in discussions about a number of other projects in Auckland including Kiwibuild projects, a church, a motel and high density social and community housing opportunities.

He says the aim is regional growth. “We have clear strategies in place and aim for staged strategic growth to increase our presence in the wider northern region.”