The design features a light box facade that is illuminated at night, as well as geometric box windows that increase the building’s visibility and connectivity with the street.

An Otago University office building has been given a new lease of life following a comprehensive redesign by Dunedin-based McCoy and Wixon Architects.

Built in the 1990s, the St David II building became vacant in 2014 when it was deemed seismically compromised.

The project’s lead architect, Matthew Mitchell, says the university deserves credit for committing to the complexities of redevelopment.

“They could have opted for demolition, but in-stead they have reused the building shell, bringing a significant asset back to life.”

The brief for the redevelopment was two fold.

Firstly, seismic strengthening was undertaken to bring the building up to 100% of code.

The resulting structure – “essentially an empty envelope” – required a comprehensive redesign of layout and service infrastructure.

Work undertaken in stage one provided an opportunity to reorientate the building’s address and entrance to St David Street.

The design response features a light box façade that is illuminated at night, as well as geometric box windows that increase the building’s visibility and connectivity with the street.

“Effectively, the new facade acts as integrated signage for the building, as well as clearly delineating new from old.”

Sustainability was a key focus throughout the redevelopment.

This is evident in the substantial use of durable and pre-finished materials requiring low or no maintenance. 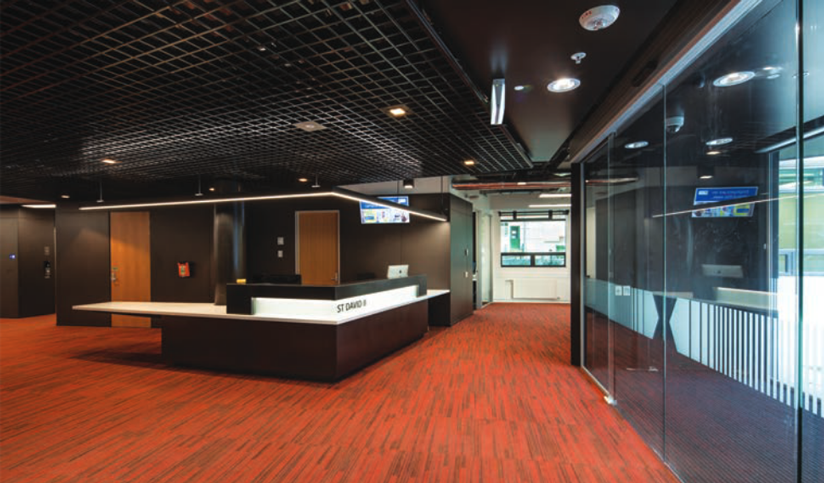 A variety of meeting and breakout spaces further enhance the flexibility of the open plan environment.

This system is linked with occupancy sensors and automated windows to augment active systems.

Cook Brothers Construction was the key building contractor, and Matthew says the relationship was a highly constructive one.

“There were a number of challenges relating to the service infrastructure, and Cooks did a good job of overcoming those successfully. They worked collaboratively with all involved through-out the building’s evolution.”

The redeveloped facility, now at full occupancy, houses a range of administrative staff from multiple departments in its open plan layout.

This use of space is a departure from the single occupant offices which are more familiar on the campus, setting a new benchmark for the university.

He says care has also been taken to build a high degree of flexibility and responsiveness into the interior design to help future-proof the building’s capability.

The installation of modular furniture also allows staff to reorganize spaces as required, and “follow-me” printing and VoIP phones enable them to maintain connectivity when moving around the building.

A variety of meeting and breakout spaces further enhance the flexibility of the open plan environment.

St David II was awarded a New Zealand Institute of Architecture Award in the Southern Education category, as well as a Resene Colour Award.

The judges called the project “an excellent example of ways to create value through creative regenerative design.”

But while these accolades are very gratifying, Matthew says the real satisfaction for him comes from meeting – and exceeding – the expectations of the building’s end-users.

“There’s a level of trust placed in us as architects. “Knowing that we’ve delivered something which will enrich the experience of the people who work there is hugely rewarding.”