The Majestic Church’s new complex is planning open in early 2020.

The congregation of central Christchurch’s Majestic Church is eagerly anticipating the opening of its new complex on Durham Street next year, the end of a tremendous nine-year journey since it was moved from its previous home, the old Majestic Theatre on Manchester Street, condemned after the 2011 earthquakes.

“We bought Cranmer Courts in Cranmer Square, and had architectural drawings done to develop that piece of land, keeping existing residential, adding more residential, along with an auditorium, artists’ quarters, café, and a car parking building.”

He says the multi-faceted community complex proposed would have been designed by one of the world’s best architects, been in keeping with the area, and made a valuable contribution to the recovery of Christchurch city.

“Because it was a change of land use, we had a public three-day hearing in front of a commissioner, and were turned down for planning permission. That put us back to square one.”

Majestic Church sold the Cranmer Courts piece of land and bought the old Mace Engineering site in an industrial area of the CBD, at the end of a block bordered by Durham Street South, Walker Street, and Wilmer Street, which is being developed now.Leo says about a quarter of the 10,500sqm site’s existing buildings have been demolished.

The remaining buildings are being refurbished to include a large auditorium and community spaces.

Modern interventions will be inserted into the existing collection of buildings, and some of these will open into a new courtyard formed by the shell of the existing structures.

“The existing industrial character of the site has been retained,” Leo says.

“We’ve kept the refurbishment pretty raw and industrial, so it still looks like it was.

“The ceiling in our new auditorium is shiplap timber and we’re keeping it exposed. We are putting in state of the art sound and lighting, so that will be the modern part of the development.”

Some of the buildings repurposed for commercial use are already in operation, and Majestic Church is now concentrating on repurposing buildings for the church community and for Christchurch city. 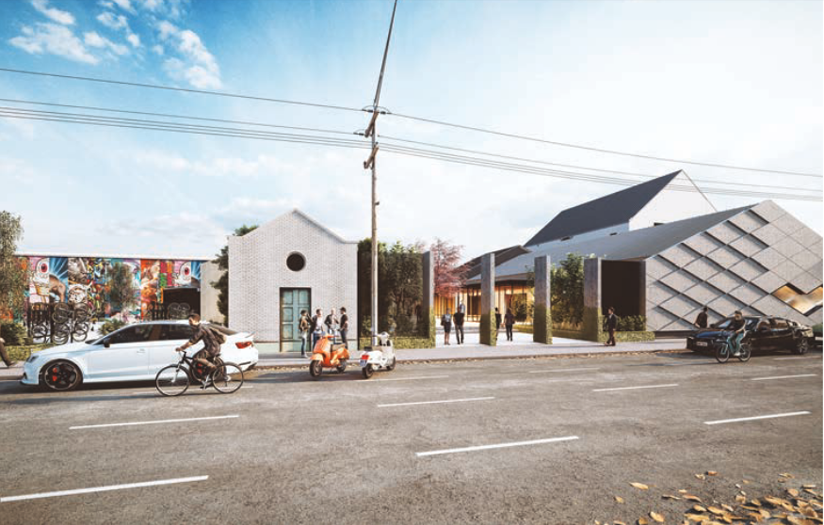 Some of the buildings on the Durham Street site are being refurbished to include a large auditorium and community spaces.

For seven years, the Majestic Church congregation meet at a rented premises on Moorhouse Ave, until the summer of 2017/18 when a building became available at the newly bought site.

It was repurposed as a transitional facility for the congregation to meet in while the new auditorium and complex is being developed.

Leo says the new facility is a huge step up from the old Majestic Theatre, which was landlocked and disabled further development.

“With this new complex, we are able to spread out a whole lot more. We run a dance school called Swarm Studios with 200 plus students, and that is going to be able to extend.

“We are quite involved in the creative arts, and we will be able to get a whole lot more of the arts operating in the space as well.

“We have a huge area for our children, youth, and young adults congregation, and are now talking with other organisations about how we can partner with them to make this a more community focused space.”

One of the biggest parts of the Majestic Church’s development vision is the auditorium.

“All of these buildings are going to be spaces we can rent out. We want to be seen as part of the community, part of the city,” Leo says.

The repurposing project has gone smoothly so far, without the discovery of any nasties to further delay the development.

“The build is now ahead of schedule, and we have hopefully passed all of the stuff that can trip you up.”

The complex is looking to be open in early 2020, and the congregation can’t wait to be in there.

“It’s been a huge journey for us, of eight years and counting, being turned down once for some-thing we thought we were going to get and having to start over again,” Leo says.

“The auditorium is right next door to our Majestic Transitional Church, so people are seeing the development progress week by week. They have been investing financially into it as well and have been very excited to see it coming together.”