The project’s Whitmore Plaza extension connects with the Harbour Wharf Link – a cut-out that separates the building at ground level into two halves and provides a pedestrian link between Waterloo Quay and the waterfront. It also provides a view shaft from the Quays to the wharves, the historic ferry building and on to Te Papa.

Wellington’s new PwC Centre’s prime location was also the project’s biggest challenge. The building, designed by Athﬁeld Architects, is situated right on the waterfront, and it required some smart engineering and design solutions to deliver a building right next to the ocean, says Jeff McHardy, project manager from construction company, LT McGuinness.

The basement of the building is located below the water level and its construction required signiﬁcant ground improvement works and complex foundations.

Essentially a ‘bath tub’ was created by CFA piling around the site then the site was de-watered via well points to allow excavation to proceed.

Bryan Perry Civil was engaged for the CFA piles and worked with LT McGuinness to deliver this tricky aspect of the project.

The CFA works create this underground structure by using a large auger mounted to a piling rig, drilling down, then simultaneously ejecting soil and replacing it with concrete.

The foundations were the other key aspect of the building, which is designed to 180% of the Building Code and features a base-isolated structure as well as complex foundation structure comprising over 1400 piles interconnected ground beams and ﬂoor slabs.

“The foundation and base-isolation systems set a new standard for New Zealand waterfront building design, and both performed well during the Kaikoura earthquake, with no adverse effect,” says David McGuinness, director of development company Willis Bond & Co, who acknowledge the challenges this part of the project presented.

The project’s Whitmore Plaza extension connects with the Harbour Wharf Link – a cut out that separates the building at ground level into two halves and provides a pedestrian link between Waterloo Quay and the waterfront, and dual entrances to the building.

The Link also provides a view shaft from the Quays to the wharves, the historic ferry building and on to Te Papa beyond.

The design offers covered pedestrian ways around and through the ground ﬂoor of the building complemented by landscaped public space surrounding the building, including the existing Kumutoto Plaza, the new Whitmore and Woolstore Plazas, as well as the recently completed Site 8 public area.

Fully leased, the PwC Centre is home to PwC, which has taken the exclusive naming rights. 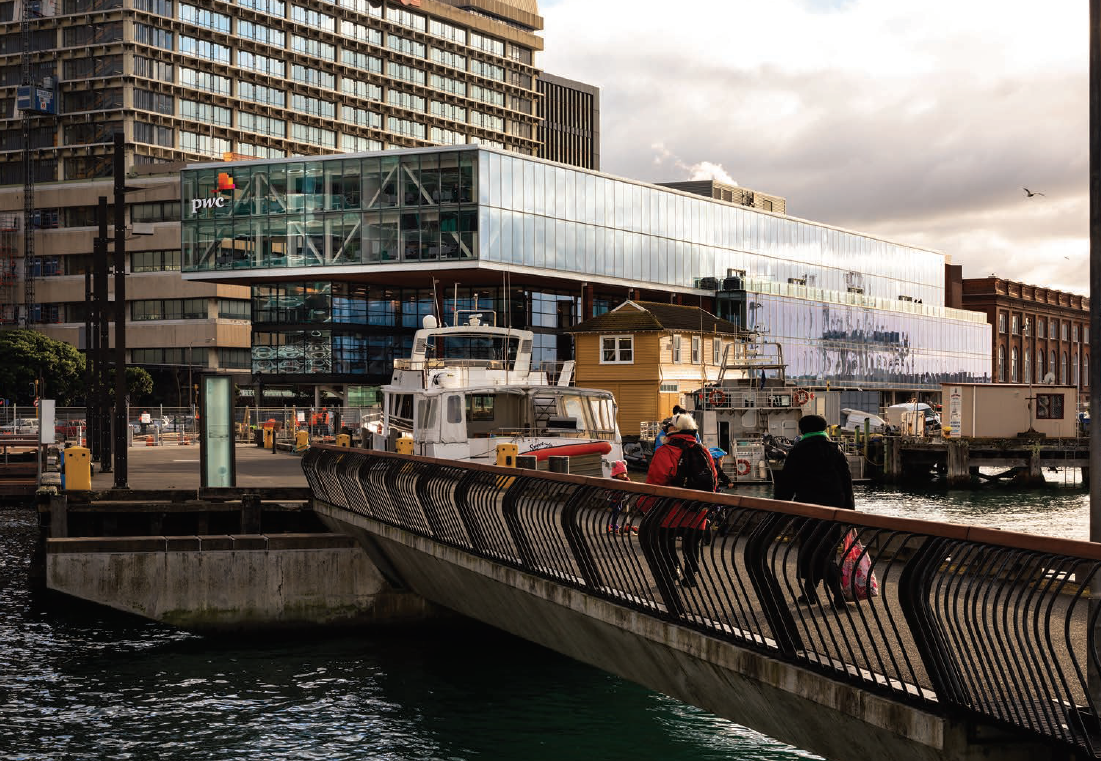 The basement of the building is located below the water level and its construction required significant ground improvement works and complex foundations.

Other ﬁrms in the building include The Co-Operative Bank, MAS, and FMG.

On the ground ﬂoor will be a Wellington Hospitality Group restaurant with conferencing facilities upstairs; Black Doris Cafe, established by the owners of the highly popular Plum Cafe in Cuba Street; Mall Drycleaners; Crave convenience store; a car showroom for Capital City Motors, the Wellington Ford and Mazda dealership; and Digital Nomad, a co-working network space.

Jeff McHardy says that the cantilevered steel structure at the southern end was another big challenge of the project.

This design feature is a three storey high portico entry providing a striking appearance as well as a sheltered public area within the building envelope. LT McGuinness completed the base ﬁtout on levels one and two and full ﬁtout on levels three and four of the building.

The building features some of the largest ﬂoorplates in Wellington and together with ceilings in excess of three metres and light on four sides provides a distinctive workspace. 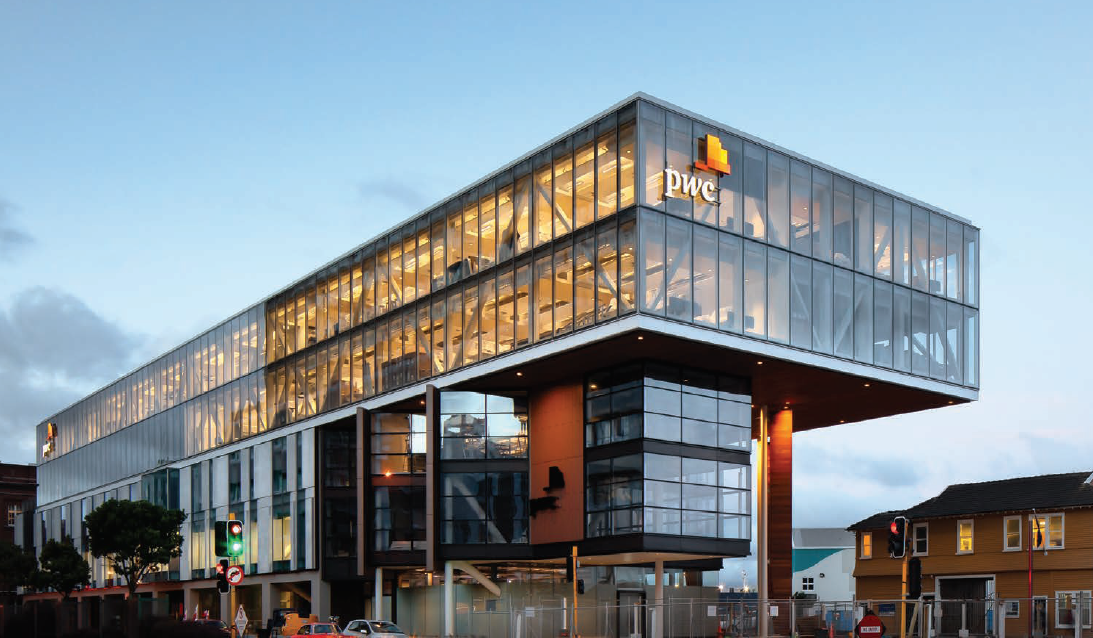 “This project really showcases the ability of LT McGuinness to deliver complex projects on time and at a date promised years previously,” says Jeff.

LT McGuinness was established by Lawrence T McGuinness in 1950 and has been involved in the construction, refurbishment and ﬁt-out of many leading Wellington buildings.

It is one of the capital’s largest privately owned construction companies and woks on all types and sizes of projects.

Willis Bond & Co is a New Zealand based company specialising in property development
and investment in Auckland and Wellington.

Other signiﬁcant precincts around the city completed by Willis Bond & Co include Chews Lane, Clyde Quay Wharf, One Market Lane, and the redevelopment of the NZX Building, Free Ambulance and Mac’s Brewery on the waterfront.

More recently the company completed the innercity campus of Te Auaha and the adjoining retail spaces, and has begun work on the second stage of this Cuba Precinct project: the redevelopment of the Farmers Building.

David McGuinness says that the new PwC ofﬁce building is unique for New Zealand in terms of the way it integrates safety and modern ofﬁce design with the surrounding waterfront and public spaces.

By offering public spaces and a colonnaded walkway, it is hoped it will go a long way towards completing the waterfront promenade book-ended by the railway station and Clyde Quay Wharf across the harbour. Opened on June 28, the PwC Centre is expected to bring around 700 people to the waterfront each day.