Skills put to good use on diverse projects

Keith Hunter Builders is nearing completion of a substantial renovation of a grand old home on Patterson Avenue, Mission Bay.

All his working life Auckland-based Keith Hunter has been a builder and as soon as he completed his apprenticeship over 30 years ago he established himself in business.“I was initially in partnership with my brother but when he moved to Australia I founded our cur-rent company Keith Hunter Builders Ltd 20 years or so ago,” Keith explains.

And during the course of those many years he has undertaken new builds, commercial work, renovations, alterations and landscaping projects throughout the city. Eventually specialising in renovations and alterations anywhere from $100,000 to over $1 million.

In time though the pendulum has swung to be a balance of new builds and alterations and it’s a combination Keith says his team of contracted builders and apprentices enjoy.“I have a team of between 8 and 15 builders I can engage depending on the amount of work on the go at any one time.

It’s a flexibility that works very well given the nature of work we take on.”While the first half of last year seemed quieter Keith has observed an increase in activity, driven by a sense of optimism in the market, so 2020 promises to be a busy one.

“What seems to be happening increasingly is that substantial properties in estate-type suburbs we work in are making use of the larger sections by infilling with new builds by cross-leasing the section. It’s been a noticeable trend now for many years as clients desire to make use of their sections and remain where they are living.”

When Business North spoke with Keith one such project on Reihana St, Orakei was exactly this in nature – building a modern three storey home of cedar and metal cladding on a challenging site in front of the original two-bedroom home.

Keith says one of the challenges of the project was in the initial excavating of the site and forming the drainage into a public drain at the back of the steep site. “I think the architect has done a very good job with the design to make full use of what space was available.”

Another project nearing completion was a substantial renovation of a grand old home on Patterson Avenue, Mission Bay. Work began in March on the existing three level home which boasted a 10m protected chimney. 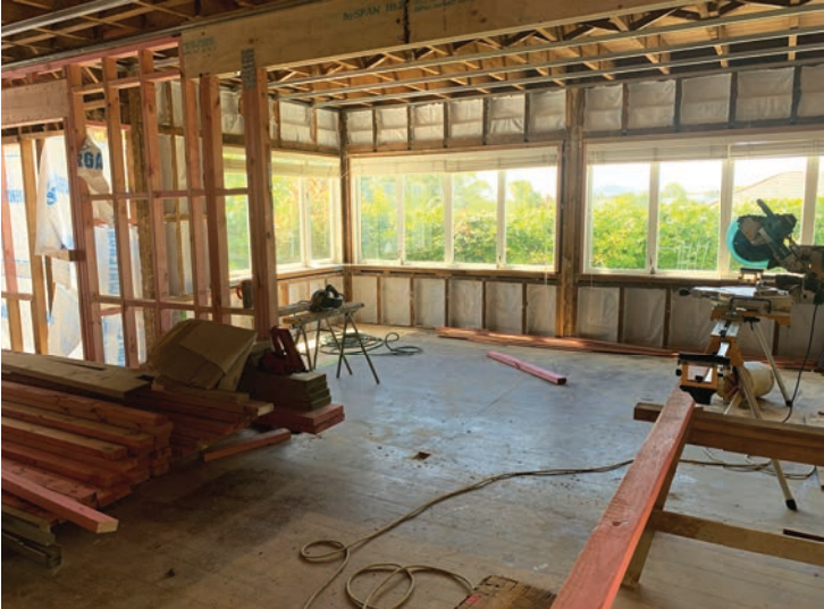 Keith Hunter Builders does a mix of renovations and new home builds.

“The bottom level was a garage which we demolished having braced the home above. It meant also supporting the chimney while a new base was constructed for it. It certainly had its challenges.”

The second floor has seen a radical renovation throughout to modernise the look and feel of the home while the third level has had a minor make-over. Keith says its common in homes of this era to need upgrading of native timbers used extensively in the period when homes of this nature were first built 80 plus years ago.

He says the project has proceeded well, given the fact that generally when renovating these older homes it can feel like one step forward and two steps back when renovations begin.“The delightful owners have been superb to work with and have understood the challenges of this major project.”

Keith is also involved in the substantial landscaping around the home once restored. It’s an activity he really enjoys and over the years has worked with top landscape architects.

“You pick up ideas from them and the owner has been really positive about the landscaping suggestions I have made.”He is also aware of how important it is to match the right foreman with each client he builds for and to gather a team of builders who gel.With a busy year ahead Keith will be taking on more builders and apprentices.

“After years in the building trade you get to read people well and I know the sort of qualities I am looking for in builders I contract.”Working with Keith at the helm is wife Sonja who takes care of the administrative tasks. Keith says her position in the company is integral to its success. “She’s the boss of everything.”