Around 500 people visited the Irrigation NZ Conference and Expo in Alexandra in April.

Without the benefit of irrigation, New Zealand’s production of food along with the variety and quality that Kiwi’s all take for granted, would look very different, particularly with the increasing impacts of climate change.

Irrigation New Zealand Inc. CEO, Andrew Curtis explains that advocacy is a key role for the nonprofit organization, communicating the irrigation story and its connection to food to the wider public.

“Ceasing irrigation of crops and vegetables would have quite big ramifications in terms of what we would eat on a daily basis,” says Andrew.

“There is this belief that irrigation is all about dairy, but people need to understand that their fruit, vegetables and wine also rely on irrigated agriculture.”

Over the years, irrigation and its environmental impact has received its fair share of criticism particularly in regard to its linkages to the dairy sector.

Andrew says that while dairy farming is a significant user of irrigation, an irrigated dairy farm can be run very well with minimal environmental impact.

He says that while irrigation has had an impact on water quality in the past there has been a massive change in thinking over the last five years with new emerging technologies providing further improvements.

“We can’t deny we did things years ago that with the benefit of hindsight, better knowledge and understanding we wouldn’t have done or we would do differently. We’re very much in that space now and the environmental impact is at the forefront in decision making.”

Andrew laments that the irrigation debate has become quite politicised but says another key reason for Irrigation New Zealand’s being is political advocacy – ensuring there is an enabling environment for irrigators to operate within.

“The new Government is now realizing the importance of irrigation. They’re no longer saying ‘no’ – they’re now talking around ensuring that irrigation is sustainable and viable. There are lots of complex interactions around the water space and the Government is starting to realize that you need multi-faceted policy development encompassing biodiversity, climate change, water quality and water flows because they’re all interlinked.”

Andrew says water is too important to play politics with and Irrigation New Zealand’s ultimate goal would be to have a bi-partisan agreement around water management. 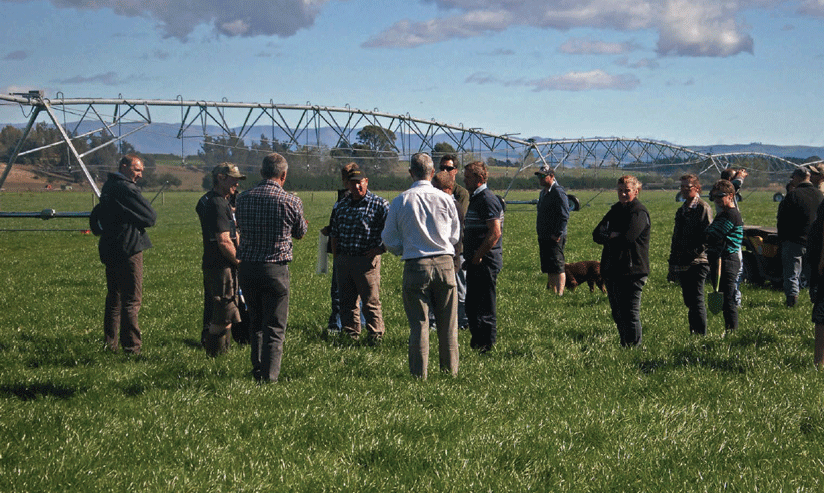 On a global scale 80% of irrigated water is delivered by open channel fl ood plain methods. New Zealand is the reverse, delivering 87% through modern spray systems.

With a philosophy of continual improvement, Andrew is quite clear the future is not about entrenching the status quo. It’s about looking to the future.

“Irrigation practices have improved massively in New Zealand. We’ve just had an American over here to address our conference and he was blown away with where we’ve gone to in terms of modernisation here.”

On a global scale, even within the developed world, 80% of irrigated water is delivered by open channel flood plain methods. New Zealand is the reverse, delivering 87% through modern spray systems.

Modernising is about the infrastructure itself – ensuring that it is fit for purpose – and the control systems – ensuring the right amount of water is delivered at the right time to the right place.

“That is where our industry is quite exciting from a technology point of view. There’s a lot of automation that has been happening in recent times. Ultimately it’s about linking supply and demand and automating that. In about 5-10 years time, human input will become obsolete in that irrigation take and delivery will become an autonomous type system.”

Andrew explains that effectively the organic plant will tell the system when it needs watering as opposed to the human having to work it out, with the human keeping check that the technology is working rather than being the decision maker. “The ultimate that we talk about is connecting the automation up to the supply as well.

So if you have a scheme supplying water to multiple properties, the supply will only take exactly how much it needs from the river to automatically deliver at the property level.

“The system would be able to forecast things like rain fall, river flows, ground water levels – so decisions are made on those things as well.”

Andrew says the latter is more a 10 year aspiration, but there is already a lot of interest from technology companies like Microsoft and IBM.