Construction of the new spillway comprises earthworks, compacted fi ll and placement of a turf reinforcement mat used when naturally grown vegetation cannot prevent soil erosion on its own.

The company won a $550,000 contract via tender to provide its services for the Southern Reservoir Spillway Remediation project.

Works include the construction and commissioning of a new spillway outlet, demolition of the existing spillway, back-filling, restoration of levels and slopes, re-grassing and stormwater drainage work.

The reservoir is fed by a 29 km race from Silver Stream which is in turn fed by the wider Silver Stream catchment in the Mosgiel area.Dunedin City Council engineering project manager, Ani Satterthwaite, says routine surveillance of the reservoir over a period of several years revealed some seepage and erosion in the area of the spillway.

Detailed investigation and analysis was required to ascertain what remediation work was required, while keeping the reservoir operational.

The reservoir is subject to assessment under the Dam Safety guidelines written by the New Zealand Society on Large Dams; this assessment covers many complex factors, including a major flood or breach of the reservoir, Ani says.

“The council undertook short-term measures to ensure that no further deterioration occurred while we carried out further investigation.”

This investigation eventually culminated in the present remediation work being commissioned.Hunter Civil general manager, Grant Ballinger, says the company was pleased to have won the contract and to have the opportunity to demonstrate its capability to Dunedin City Council.

“Our contract is for the works associated with increasing the capacity of the spillway and we are doing that by building a new spillway and control structure adjacent to the existing one which is being decommissioned as part of this work.” 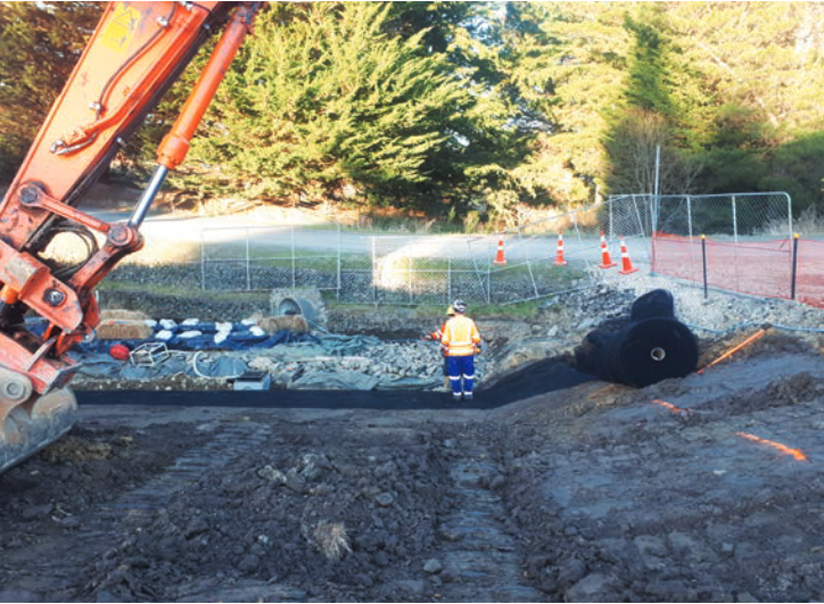 Hunter Civil is engaged in the remediation of the Southern Reservoir Spillway for the Dunedin City Council.

The height of the control structure means water will go down the spillway in a controlled discharge once the water level reaches a specific height in the reservoir.

“[The spillway] only gets used when the reservoir overflows during intensive wet weather events.”

The first stage of the project started mid-May and the new spillway will be commissioned mid to late spring.

Grant says the work is an example of Hunter Civil’s technical expertise in three waters projects, which not only require comprehensive civil construction skills, but also the ability to deliver the best possible value for its clients.

The company has won 11 Civil Contractors New Zealand Canterbury Contractor of the Year awards during the past nine years, including the Supreme Award for Washington Way Reserve Skatepark, Christchurch.

Grant attributes the awards not only to Hunter Civil’s expertise and quality focus, but also to the firms careful planning and execution of projects, along with its relationships with key subcontractors and suppliers.