With existing packhouses already operating to capacity massive new plant and infrastructure is needed to be built now.

Based in Katikati in the heart of Kiwifruit country Hume Pack n Cool has been servicing the sector since 1984 when Dave Hume and his sons built their first cool-store facility capable of holding 100,000 trays.Fast forward 35 years and the company has expanded not only its plant and use of advanced technologies but has shifted its business structure to include grower shareholders who came on board in 1999.

Mark Hume is the company’s managing director and with years of experience within the sector he says the future of the kiwifruit industry not only in the Bay but throughout the growing regions is poised to explode.

“We think we’re busy now but with release of the new Sungold variety we’re going to see a huge uptake in demand and volumes being processed for export,” says Mark.“It will bring tremendous wealth for the country and our whole sector will need to gear up for this inevitability.”

He says there is still a lot of quite labour-intensive activity inside packing facilities and this will need to be addressed if the sector is to benefit from sky-rocketing demand for our kiwifruit on the international stage.“People still can’t quite comprehend the change that is coming. “It’s mind-boggling how this industry will need to change to cope in the future.”

New rules set in legislation concerning provision of adequate accommodation on site is a current major focus of activity at the Hume Pack n Cool site.“The government is requiring kiwifruit processors have enough accommodation to house their workers at the peak. “In our case we have over 400 seasonal workers come on board when the season gets underway.

“We are currently able to house 75 on site and are aiming to house 120 this coming season with the balance housed in dormitories,” Mark explains.The company fortunately had the foresight to buy sufficient land to house these dwellings.

Inside the processing sheds near infrared cam-eras assess the internal structure and outer look of every fruit that passes through the packing facility. “We’re not huge as far as the big players in the industry go but we’re extremely innovative in our approach to packhouse and cool-store systems.”

Mark can see several challenges facing growers and processors alike.“We’re going to have to spend in excess of $1billion and growers will have to front most of this. “While there’s been a revolution in pack-house processing technologies there’s still nothing on the horizon for mechanising harvesting. 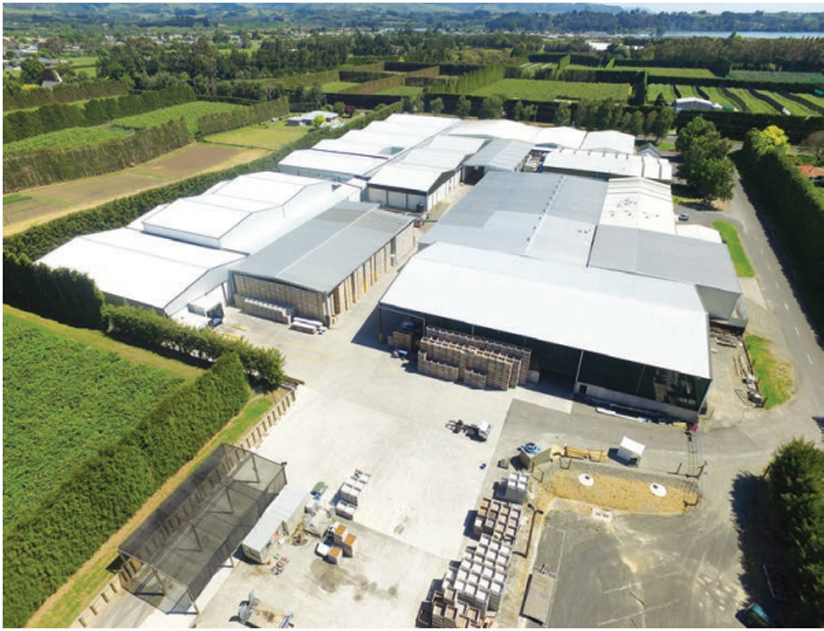 Hume Pack n Cool has been servicing the Kiwifruit sector from its Katikati base since 1984.

“We’ve also got to face growing cost of labour and I can see there will be winners and losers through this journey.”With existing packhouses already operating to capacity massive new plant and infrastructure is needed to be built now.Zespri is doing a fantastic job marketing Sungold kiwifruit. Mark says that new imaginations are being called for in using plant to maximum benefit.

He’s involved on several Zespri committees and says it’s attitude to support new projects from a risk point of view is pivotal to the continued success of the whole Kiwifruit sector.“We have to think about lights-out technology where plant is capable of working 24/7 without people packing.

“We’re currently processing about 5 million trays each season.”Going forward another key risk is with biosecurity. Fruit fly has been discovered in Auckland and while not yet established in New Zealand the Brown Marmorated Stink Bug is posing an extreme threat to the industry.

The bug which originates from Asia has spread throughout Europe and the US where it has brought catastrophic consequences for fruit growers.And it goes wider than what growers, processors and companies like Zespri are having to plan for.

Mark says local and regional Councils have a vital part to play in securing the future of the Kiwifruit industry.“We’re talking here about planning infrastructure that traditionally takes years to build such as port handling facilities and roading networks.

“We also have to have the communities on board to support this development and see the benefits that will flow to the nation as a result.”Growers are changing too, with a far greater corporate presence, heralding in a new era of orchard ownership.

Mark says its very encouraging to see the young talent coming through the industry and he enjoys mentoring the future pioneers who will take the Kiwifruit sector to new and exciting heights.

New base in Wanaka for vet clinic
Tom O'Leary Mar 21