As one of the first Canterbury schools to be identified for a complete rebuild, the new Hornby High School has combined different areas of the curriculum in a way no other school has yet been able to do, resulting in a true Centre of Creative Excellence.

Having moved into their new buildings at the beginning of term three this year, Hornby High School deputy principal Jon Rogers says students and teachers are all excited to see how their new school is going to work.

“One of the most exciting things is the way we have put different curriculum areas together in ways we think will be particularly exciting,” he says.

“In one wing of the new building we have put food rooms right next door to the science labs, and on the other side we have computing, robotics, and 3D printing right next to the solid materials and fabrics. We see great synergies here in combining technologies and solid materials then sciences and foods.”

Jon says the amount of input the staff and senior leadership of the school had in its rebuild is just amazing, and shows an enormous amount of trust and faith from the Ministry of Education which has listened to the school and given it what it thinks it needs.

“We’ve had a massive influence on how we wanted our new school to be, and a lot of support from the Ministry and the architect Stephenson and Turner. I feel the Ministry gave us a hefty budget and said ‘give us a school that will last for another 50 years’.”

Hornby High School staff had to think long and hard about what teaching and learning is going to look like in the future.

“It’s changing so much, even from five years ago when kids didn’t need to have their own devices, to now when we require them all to have their own Chromebook. Nothing is static in education these days. It’s a radically changing system and we’ve tried to make something that’s functional now, and will continue to be functional in 20 to 30 years’ time.”

He says Hornby High School’s key consideration has been flexibility of spaces. “We have no load bearing walls in our internal spaces, so if they want to make bigger or smaller spaces in the future, it can easily be done.” 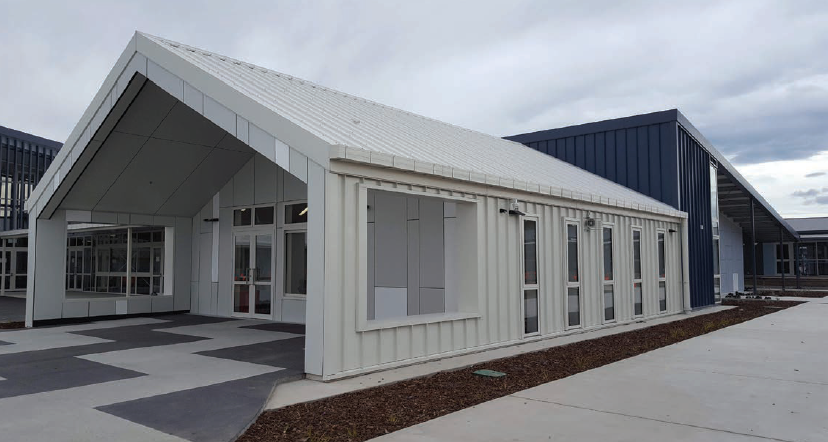 The school’s redevelopment was completed by Leighs Construction in two stages, the first being a new, state-of-the art, 1200sqm gymnasium, an administration block and reception, classrooms, offices, and shared spaces for students.

Permanent, S68 concrete block buildings and an auditorium were added in the late 1970s and 1980s, and the school opted to keep some of the initial temporary rooms, laid out in nice.