After more than two years of construction, Hornby High School’s $26 million rebuild is entering its final phase with staff and students excited about moving into three new classroom buildings designed for the future.

The rebuild is now all but complete and on track to wind up in March 2020 following demolition of old buildings, asbestos removal and final landscaping.

For students and teachers alike, the move from old 1970s prefabs into modern, multi-purpose facilities has been a breath taking transformation.

“It has been a long time in the planning,” says Jon Rogers, Hornby High Schooll’s Rebuild Project Manager, who previously served as the school’s deputy principal from 1994 before retiring from the role last year. “

“When I first arrived here, the roll was declining and we were not getting any new facilities at all, so to be able to design a school with the young people of Hornby in mind and have it built is just amazing.

Each has nine main teaching spaces, of varying sizes and with many smaller breakout spaces, with blocks connected by an enclosed laneway that can also be used for recreational and learning activities.

“We have designed for the 21st century, not the 19th. We are excited that the design of the buildings will make teaching and learning more relevant and engaging for our students.” The new buildings have been named after native birds associated with the area.

These names were gifted by Ngai Tahu as part of a cultural narrative for the school. In 2020, the school aims to move to a whanau-based pastoral system with students identifying with their particular Kahui. 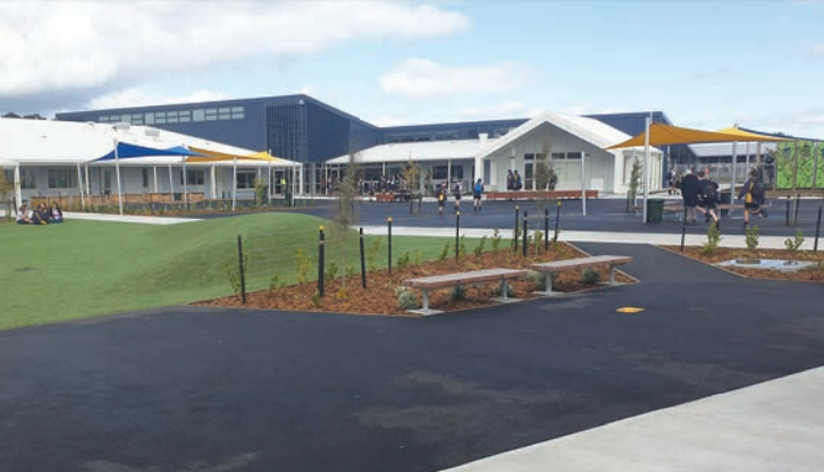 As well, students have a new central courtyard to enjoy and there are also plans to add an outdoor stage there.Since completion of the project’s first phase last year, teachers and students have embraced the rebuild.

“The amazing acoustics enable a large number of teachers and students to work in semi-open, flexible spaces and the interaction between the different learning areas is just what we aimed for,” says Jon.

With substantial design input from the school’s senior leadership team, it is clear this remarkable rebuild reflects the community’s aspirations.

“We wanted to build a school that would give the children of Hornby every chance of success in preparing them for their future lives. We are exception-ally proud of what we have built – it is unique.”

The rebuild of both Hornby High School –and neighbouring Hornby Primary, which has also been undergoing substantial redevelopment – has been delivered by a skilled and creative team including Leighs Construction, Stephenson & Turner (architects), OCTA (project managers) and the Ministry of Education.

“Most of all I would like to acknowledge the patience, tolerance and commitment of the teaching staff in maintaining teaching and learning in often trying circumstances,” says Jon. “They are an amazing group of people.”

Tags:
Previous Article
Risingholme returns in all its splendour
Next Article
Primary, community care the key