Heritage House Relevellers has had a record breaking year in the Hurunui District with some very large lifts for repair projects following the Kaikoura earthquake.

Christchurch’s Heritage House Relevellers has had a record breaking year in the Hurunui District with some very large lifts for repair projects following the Kaikoura earthquake.

In the past 18 months, Heritage House Relevellers has picked up the Lynton Downs Farm Stay homestead at Kaikoura, rolled it forwards so its new foundation could be built, then returned it back to its site.

Heritage House Relevellers has also picked up the Highfield woolshed at Waiau, the district’s oldest functioning woolshed and one of the oldest in New Zealand with a history dating back to the early days of New Zealand sheep farming, constructed in 1877.

During the Kaikoura earthquake, the woolshed was pushed off its piles, the roof above the southern wall collapsed, and the floor was damaged.

“Lifting this shed broke the record for the number of hydraulic jacks we had to use,” Lindsay says.

“This isn’t the oldest or heaviest building we have lifted, but its sheer size meant we needed jacks in the right places to lift it cleanly.

“Our previous record was 25 jacks, on Highfield woolshed we used 44 jacks and lifted the building to a height of 1.8m.”

Heritage House Relevellers inserted 50 big steel beams under the shed and inched the building up over the course of three hours.

After the firm lowered it back on to 326 new piles, the beams were tied to the piles.

The work is the same, but the clients have changed from the insurance companies to now working directly for the home owners who have been cashed out and are fixing up their ‘as is where is’ properties.

Lindsay says eight years down the track there are still plenty of ‘as is where is’ properties – 400 featured on Trade Me the day we spoke, and that’s just the ones on the market.

“We’re also getting enquiries from lots of owners who aren’t even cashed out yet, they are getting things organised for once their claims are settled,” he says. 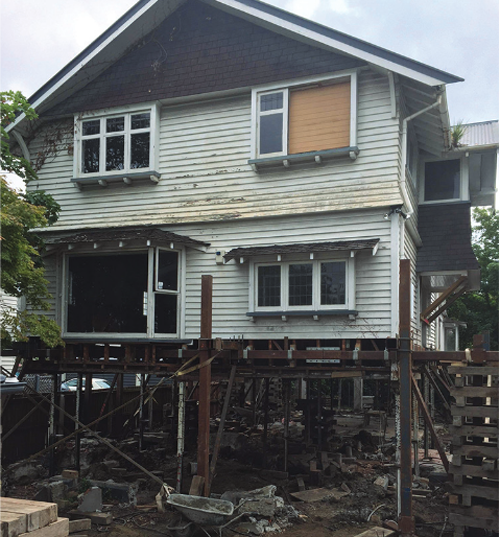 He says Heritage House Relevellers comes on board with these clients and makes sure they have a sound strategy for repair with correct costings, and getting it checked by an engineer.

“Then we line them up with the builders and other trades they need to complete their repair,” Lindsay says. “The trouble is at the moment, a lot of people can’t get tradesmen.

“We’ve got a number of tradesmen we’ve used from day one, so it makes it a lot easier for the homeowner if we can connect them with the electricians, the plumbers, and the builders to complete their repair project for them.”

Tags:
Previous Article
Warehouse project has its challenges
Next Article
The residential house experts in Motueka