The Italian connection – keeping it real

Keeping it real - Daniela Burlando and Yuri Aristarco pride themselves on their traditional artisan approach to production.

Gelato Roma had been in the market for eight years, when husband and wife Yuri Aristarco and Daniela Burlando purchased an existing gelato shop in Richmond Mall, Nelson.

Yuri was a restaurateur in Italy and the couple were keen to get back into the food industry.

After sampling our ‘amazing’ New Zealand milk, they decided they had to make gelato.

The previous owner at Richmond Mall had been making gelato from premixed powders, but for Yuri and Daniela, traditional artisan production using locally sourced raw materials was the only way forward.

The first point was to find the best milk possible, and after much testing of local product they have settled on A2 milk from Nelson’s Oaklands Farm.

“We want to have the least processed product as we can,” Daniela says.

“It’s about keeping the fl avours real. We produce Italian artisan gelato but we also want to be loyal to the land we’re in. Using creamy whole milk from Oacklands Farm, hazelnuts grown in Canterbury, peanut butter from Pic’s here in Nelson, and seasonal fruit and berries from the Southern Alps, Richmond Plains, and the Moutere Hills, we create the authentic taste of Italy from the natural goodness of New Zealand.”

There are technical differences between ice cream and gelato, and the production process is also different.

It uses more milk and less cream, and is served at a higher temperature than ice cream.

Since cream and cold tend to cover up flavours, the raw materials used in gelato can be tasted more compared to ice cream.

Gelato Roma also keeps the sugar content as low as possible so it doesn’t cover the flavours.

“When you taste our hazelnut gelato, it’s like eating a hazelnut.

You get the real flavour of each raw material we use.”Same with Gelato Roma’s sorbets.

Judges at the 2018 New Zealand Ice Cream Awards agreed, and Gelato Roma scooped silver prizes for its hazelnut, caramel, and tiramisu products in the gelato category, its boysenberry, feijoa, lemon, and raspberry sorbets, and black cherries and caramelised peanuts gelato in the gelato and sorbet category.

Gelato Roma is now on the way to becoming its own little empire, with the company’s products now available in 16 cafes from Paihia to Arrowtown, and mobile shops in Coromandel, Nelson, Tasman, and Christchurch. 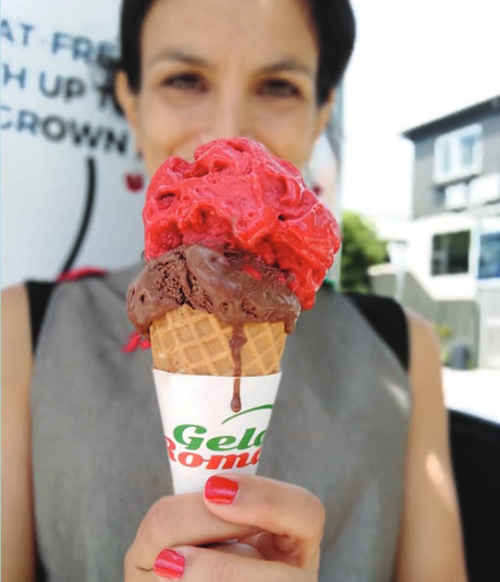 Production has moved from Richmond Mall to a small factory in Nelson and products are shipped around New Zealand from there.

“To be able to serve the country, to be every-where and still do it the artisan way at a large scale is not easy.

“We see people are much more aware about what they eat, they look for our artisan product and they understand the difference between ice cream and our gelato and sorbets.”