GD Jones Builders’ homes are contemporary in style and are always designed, with architectural input, to maximise the views and sun.

A new community has established in Shotover Country near Queenstown. Everywhere there are new houses, or houses being built.

Over the past five years the development has been growing quickly and Shotover Country will eventually comprise some 800 homes. The Shotover Primary School opened in 2015.

Backdropped by the Remarkables mountain range, with outlooks to Coronet Peak, Cardrona, Cecil Peak and Walter Peak, the community borders both the Shotover and Kawarau Rivers.

Designed as an appealing ‘Kiwi-style’ residential neighbourhood offering affordable “entry level housing,” some homes in the development have been reported to be selling for more than $1 million in recent times.

The community there reflects the spirit of the Wakatipu pioneering families who made their homes in the Lower Shotover township on the same site many years ago.

Builder Graeme Jones (GD Jones Builders) is one of those new residents, having moved into the new home he built there in March. And he’s finding that being a local is good for business.

Graeme Jones grew up on the family farm close by, much of which has now gone into the adjacent housing development at Lake Hayes Estate.

When he left school in 1980 he did an apprenticeship and became a builder, and has been working for himself since the early 1990’s. Then five years ago he made a conscious decision to build houses for himself One a year.

With the acute housing shortage around the Wakatipu it’s been a good strategy, and buyers of his houses have generally been locals or people moving into the community.

By managing the whole project himself, and being loyal to his subcontractors, he maintains strict quality control.

Graeme takes the projects right through to completion with driveways, retaining walls and the landscape framework, leaving new owners to select their own planting plans and window dressings. 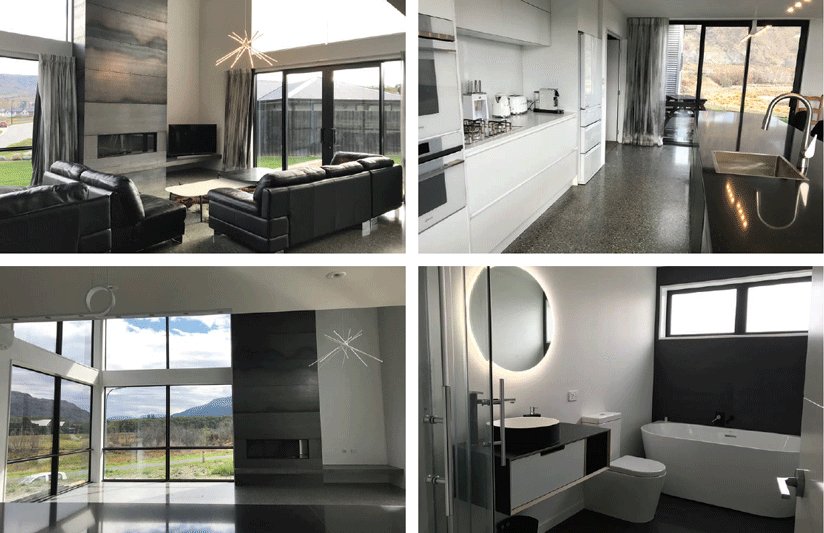 People have confidence in the quality of his builds, and Jones is quietly proud of his workmanship.

Finding sections is the hard part, with demand outstripping supply in a market where Jones says he’s “made some good choices, but also been fortunate”.

Building for the “mid to high end of the market”, GD Jones Builders homes are contemporary in style and are always designed, with architectural input, to maximise the views and sun.

What we design is specifically for that section,” he says. As is the case with the stunning setting of his own Shotover Country home, which overlooks a wetland reserve and has panoramic views from the base of the Remarkable mountains over the Shotover Delta and towards Coronet Peak.

Polished concrete flooring and a Miton kitchen – custom-built and imported from Italy – add fl air and ambience to the family home of four bedrooms and two bathrooms, with adjoining one-bedroom flat.

Built with maximum insulation in underfloor and ceilings, and with “thermally broken” low-E glass windows with argon gas, the house is very warm.

Exterior claddings are vertical shiplap weatherboard and Hardies’ TitanTM Panel cement board, complemented by a high quality Kwila hardwood decking. Graeme ays working for himself he doesn’t have the pressure of clients wanting things done to a deadline.

He says he can take more care and craft the homes in the “old-fashioned manner,”, like making complete doorframes “in situ.”

Its handy having daughter Alex helping on-site when she’s not busy with her own massage business.

Meanwhile partner Tracie Patel, who has a background and in design, makes his job easier by sharing her opinions and support.

Graeme’s two sons Matt and Sam are also builders and have helped along the way, but both are now doing apprenticeships in Dunedin.

Graeme has recently started on this next house project, also in Shotover Country, which will be built along “similar lines” to his own home and will go up for sale early next year.

Tags:
Previous Article
Brook’s team enjoying the busy times in Cromwell
Next Article
Daphne a genuine lady of the land